After a series of rapid fire pivots, Roamz, one of many services launched during the location-centric app explosion to try and help you find things to do nearby, has shut down.

To date, the team had raised around $3.5M, almost entirely from Australian direct mailing/marketing house Salmat.

The writing has been on the wall for a while now. When Roamz launched back in October of 2011, it focused on what they considered “serendipity”, scanning Facebook, Foursquare, Twitter, and Instagram to find things going on around you that you might not know about.

By July of 2012, founder Jonathan Barouch declared that this didn’t seem to be something people actually wanted. By August, they’d pivoted to using that data to help people find good venues — the best coffee, the best ice cream shops, etc. You know, kind of like Yelp. Or Foursquare. 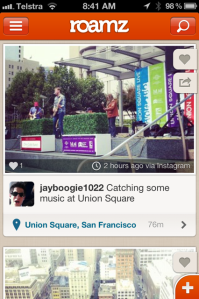 By March, Roamz’ grave had been dug. They’d managed to pull just 200,000 downloads in nearly 2 years. The team had shifted their focus to a new project, and Barouch openly admitted that he didn’t know what would happen to Roamz.

As of today, Roamz has been pulled from the iOS and Android app stores, the web version shuttered. But all is not lost!

That ‘new project’ the team had focused on? It’s called Local Measure. Using some of the tricks that the team picked up while building Roamz, Local Measure promises to show business owners what their in-store customers are sharing, even if the business isn’t mentioned by name. If someone tweets out “LOL, look how nasty this food looks” while dining in your restaurant, for example, they’ll try to find it and bring it to your attention.

So far, it seems to be working — that is, it’s actually making money. In an email sent to Roamz users, Barouch says “that in the 12 weeks since launch, we’ve already successfully on-boarded hundreds of businesses and have already have some large paying customers”. (For the curious: smaller, single shop businesses pay Local Measure around $60 per month, while larger operations pay around $100 per month)

While the B2B customer sentiment space isn’t an empty one, it’s certainly a lot less crowded than the one they were in before. Plus there’s, you know, actual money being spent there.

Here’s Local Measure’s demo video, explaining what it’s all about: