“Voice Twitter” app, Bubble Motion, has just rebranded itself as Bubbly, and revamped its interface as it enters version 3.0 of its mobile app.

The Bubbly app has been around for two years now, but this rebranding marks a pivotal shift in the company’s direction away from its original model of providing voice text messages.

When it started in 2005, its service allowed people to record voice clips, sending it to friends via ordinary SMS. The recipient would dial the code in the text to retrieve the message from Bubble Motion’s system. The analog nature of this made the app popular in its target emerging markets of Indonesia, the Philippines and India.

Two years ago, the Singapore-based startup decided to get in the smartphone game and launch an app that made it a lot more like Twitter. Instead of sending messages to another person, you’d now record a voice clip and broadcast it to your followers.

The new version 3.0 responds to requests from smartphone users, who asked for more audio layers such as background audio imitating a coffee shop or club atmosphere, or voice filters to alter recordings by adding reverb or changing pitch. The iOS app had some of these filters already, and the new version brings these to Android, as well. 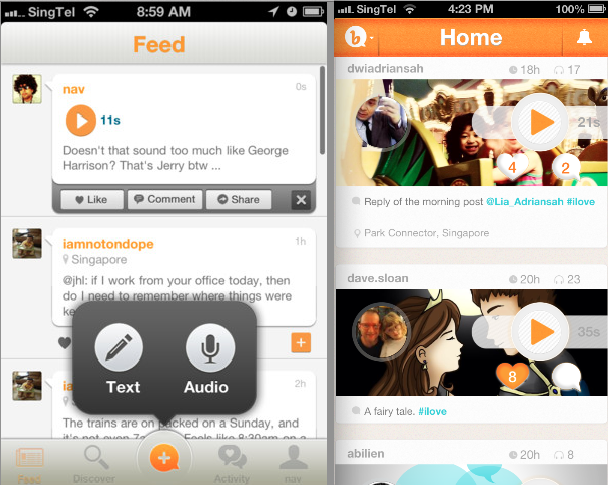 Its CEO, Thomas Clayton, spoke to us about the Bubbly app in February, and said the older voice message function was receiving “zero attention” from the company.

But Bubbly is careful about not alienating its feature phone base. Clayton emphasized that the new “Twitter” service is 95 percent subscribed to via feature phone users, who dial in to retrieve voice blasts via the old circuit-switch method.

The company is planning to add private and group posts made from smartphones to SMS available in its next update, scheduled for next month.

“More than four billion consumers in emerging Asian markets still use feature phones,” he said. And as this base eventually go to smartphones, it’s the company’s hope that they’ll stick with Bubbly on the other side.

Since Clayton spoke to us in February, Bubbly’s user base has grown from 25 million to 30 million.

The company has raised $50 million in funding so far. In 2011, it got $10 million from investors like SingTel Innov8 and Sequoia Capital, and in 2012 it got another $5 million from Japanese firm, JAFCO Asia.

You can download Bubbly for both iOS and Android.