It isn’t too often that covering a startup’s launch involves being couriered Saturday night’s dinner, even if I still had to find somebody to cook it for me. But that was the case with regards to Housebites, which launches its new subscription food offering today.

After shuttering its platform that enabled independent chefs to sell home-cooked meals as an alternative to a traditional take-out, the UK startup is rebooting for a third time today with its own twist on the recipe kit idea, which at first glance pits it against Rocket Internet’s HelloFresh and local player Gousto. However, although subtle, Housebites’ positioning and longer-term strategy may be slightly different with an emphasis on learning new chef skills as you move up the culinary ranks, not just the convenience of having all of the required fresh ingredients and accompanying instructions delivered directly to your door.

Relaunched with the strap line “Release your inner chef”, the new Housebites offering, which builds on last year’s soft launch, sees subscribers sent a recipe box each week containing step-by-step recipe cards and the needed portions of raw ingredients to cook three meals, each of which will serve a minimum of two people and should take about 30 minutes to prepare. Initially targeting London only but with wider UK coverage planned for later this year, pricing starts at £29 per week (£14.50 for the first order), which includes delivery, and like its competitors, the weekly subscription can be canceled at any time.

Housebites is also offering a one-off ‘LoveBox’ so that anybody can cook a restaurant-quality three-course meal for their date “with confidence”. Breakfast is also an optional part of the LoveBox product for those who are feeling lucky (or just like to comfort eat in the morning).

The LoveBox aside, so far, so HelloFresh and others. Exactly how then is Housebites striving to be different? Along with stressing the quality of its recipes and ingredients, which all of its competitors do, the startup is focusing on what it’s calling “discovery and mastery”. The idea being that subscribers discover new dishes but also get to learn technical skills, like knife techniques and filleting, which will give them more confidence in the kitchen. In addition to the recipe kits themselves, Housebites is providing further learning materials on its website, such as short stop-motion video tutorials.

“We want to focus on the discovery and empowerment end that resonates with the Masterchef generation,” Housebites founder and CEO Simon Prockter tells TechCrunch. “That means making people feel they’ve accomplished something and help people to improve in the kitchen whilst giving them the credit.” Part of that plan is to increase the complexity of dishes for subscribers who stick around.

Conceding that customer churn is one of the main challenges facing a subscription service like Housebites, the company is also planning on introducing “periodic packages rather than subscribe until you remember to cancel”, and says that adding value for the customer over the longer term will be key. “We have a lot of ideas going forward and they don’t have to begin and end with weekly boxes,” says Prockter.

Whether or not Housebites can innovate its way into a crowded marketplace — its main competitors are better funded, too — only time will tell. Once again, scale could be an issue and it will be interesting to see how quickly the service ramps up beyond its London launch. 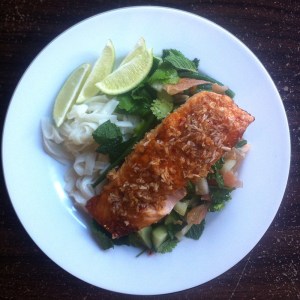 Finally, it would be criminal not to talk about the experience of my first (disclaimer: complimentary) Housebites recipe kit. Namely, how did it taste? The blurb for the dish — an innocent sounding warm salmon salad — promised a taste explosion, and let’s just say that devouring it was like stepping on a gastronomic land mine. The result was something quite unexpected.

The recipe card was straightforward to follow, outlining in advance what would be required, including the number of pots and pans, while my roped in friend-turned-chef’s only complaint was that the font-size for the step-by-step instructions could do with being increased for at-a-glance-ability. Meanwhile, my only real complaint was the smug look of achievement plastered across my friend’s face once dinner was served. Admittedly, though, the final results did look impressive and closely resembled the photo printed on the front of the recipe card. It tasted pretty good too, both of which is probably testament to a decent start by the new new Housebites.