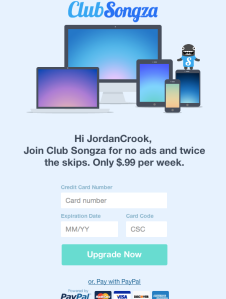 Songza, the music-streaming and recommendation service that has picked up some 4.8 million monthly active users with its free, ad-based service, is turning on a feature now that it hopes will convert some of its most loyal listeners into more monetizable ones. It is launching “Club Songza,” a subscription-based service that is priced at $0.99 per week for users to get an ad-free experience.

Songza has started out by sending emails to its 500,000 most loyal users in the U.S. and Canada — the only two markets where Songza is currently available — encouraging them to sign up. “You can now subscribe to Club Songza to go ad-free and get double the skips on Songza’s apps for iPhone, Android, Sonos, and the web,” the email says. “Only $0.99 per week. (Cheaper than a soda!)”

Maybe not cheaper than Spotify, though, which starts at $4.99/month for desktop/laptop ad-free subscriptions and $9.99/month to include mobile and other devices.

“We’ll be sending out more invites, and over the next few days we will have sent it out to everyone,” Elias Roman, the CEO and co-founder of Songza, told us after we contacted him to ask about the service.

Songza, which was co-founded by Roman after Amazon in 2010 bought his previous startup, Amie Street, also counts the e-commerce giant as an “active” minority shareholder.

So why the move to paid subscriptions? You may think that it’s because it’s hard to monetize ads on a user base of 4.8 million listeners, or because Songza is not able to make enough from the labels on those numbers. But Roman says otherwise. “The primary reason is user request,” he says. A lot of users have been requesting an ad-free service, he adds, and they are throwing in a couple of other sweeteners: more ability to skip tracks (to 12 from 6 in the free version) and special access to more premium content. He points out that Songza’s playlists are curated by 50 very top music experts that source rare content, such as “a track on vinyl from a swap meet in Brazil.” At other times, it may be a playlist created by a famous DJ.

On the ad front, Roman says that Songza makes the pitch to brands that what they may not be getting in listener numbers they are making up for in loyalty. “We generate millions of minutes of engagement,” he says. “It’s not quantity but quality.” In May, when Songza unveiled its newest version (3.0), it noted it was seeing 65 million minutes of use on its platform per day.

Other music streaming platforms have been grappling with questions of margins on digital music and debates over royalty payments across the music ecosystem. Most recently, Pandora founder Tim Westergren defended claims that it was squeezing artists. Last November, we wrote about how Spotify’s profitability structure is partly based on it achieving a particular level of scale.

While I had Roman’s ear, I also asked him the ever-present, slightly selfish question I like to ask of all U.S. startups: when are we going to see this service go abroad? “There are other territories on the roadmap,” he noted. The UK is not among them, however. “We look for relatively less crowded markets, and the UK doesn’t score super high in that category.”