Baydin, the startup behind a suite of productivity add-ons for Gmail, Outlook, and Google Calendar, is today bringing its inbox management solution Boomerang for Gmail to the mobile platform. With a new app called Boomerang for Android, the company is iterating on its previously web-only application in order to offer non-iPhone users their own gesture-based, email scheduling and snoozing application, similar in some ways to the iOS app Mailbox.

Prior to its $100 million acquisition by Dropbox, the hype around the Mailbox app was incessant. Naysayers will argue that the app was perhaps overly fawned upon by tech press (yes, including ourselves), but that opinion ignores the fact that users are checking their email on the go, and especially on mobile devices like their iPhone, more than ever before.

While Baydin’s add-ons may have been around longer, offering browser plugins for web apps is no longer seen as the most innovative solution to the information/email overload problem, no matter how clever they are. That’s why Baydin’s launch of a mobile application is notable. It’s now stepping up to compete in the area where there’s still a major need for better management tools.

Baydin CEO Alex Moore agrees, saying mobile has been the number one request from customers, and the company is thrilled it finally had the resources to deliver. 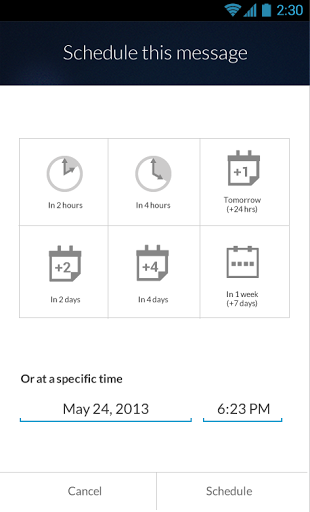 Google, of course, has not been ignoring the email management problem. The company recently introduced new features to its Gmail app, which helps to automatically categorize incoming messages as “updates,” “promotions,” and “social,” and then moves those into designed sections of the inbox.

But Baydin’s Boomerang app isn’t about pre-sorting email, it’s more about managing your responses and other actions. By swiping to the right, you have the standard option to archive a message, while swiping to the left lets you choose from more actions including also delete, snooze (aka “boomerang” – where the app gets its name), label, mark as read and star.

Scheduled messages can be configured with a tap to go out in 2 hours, 4 hours, tomorrow, 2 or 4 days, a week, or you can type in a date and time to be even more specific. In addition, the app can bring back messages to the inbox if there’s no response, allowing for further follow up.

Unlike Mailbox, which only works on mobile (iPhone and more recently iPad), Boomerang’s advantage is that it will work on both web and mobile, but for now, “mobile” means “Android.” The company says that support for iOS is planned for the future, however.

Though Boomerang and Mailbox share several similarities, the Android app lacks the same design polish and simplicity which made Mailbox really stand out. Boomerang is plainer and more utilitarian in nature, with a largely black-and-white look versus Mailbox’s brighter, color-coded actions. If Mailbox made you feel like you were pruning the roses in your inbox, then Boomerang feels like weed whacking. But that may be a better fit for the Android platform where users often appreciate customizations and control over simplicity. Boomerang, for example, even lets you configure the gestures.

The company is now working on support for non-Gmail services, including Exchange and IMAP, plus offline support, push notifications, and a tablet-optimized version. Moore also notes that mobile support for calendar management is also in the works, adding that he feels scheduling is even tougher on mobile than on the desktop.

In the meantime, Boomerang for Android is available for download here. (While in beta, the app is free. Pricing is still TBD.)