Microsoft today officially launched Windows 8.1 Preview, the first public beta of its flagship operating system’s next version, at its Build developer conference in San Francisco today. For Microsoft, Windows 8.1 represents a chance to fix some of the issues with Windows 8. The fact that Microsoft is bringing back the Start button and now allowing users to boot right into the desktop is a sign that the company has been listening to its users. In many ways, 8.1 — even in this Preview version — is what Windows 8 should have been.

As Microsoft has said for a while now, the usual three-year update cycles for Windows don’t really work anymore in today’s environment. Even though Microsoft delivered over 700 improvements to Windows 8 since its launch, Windows 8.1 represents quite a bit more than just the culmination of these efforts. It’s not just a service pack but actually includes a good number of new features that do make it far more usable than the previous version. 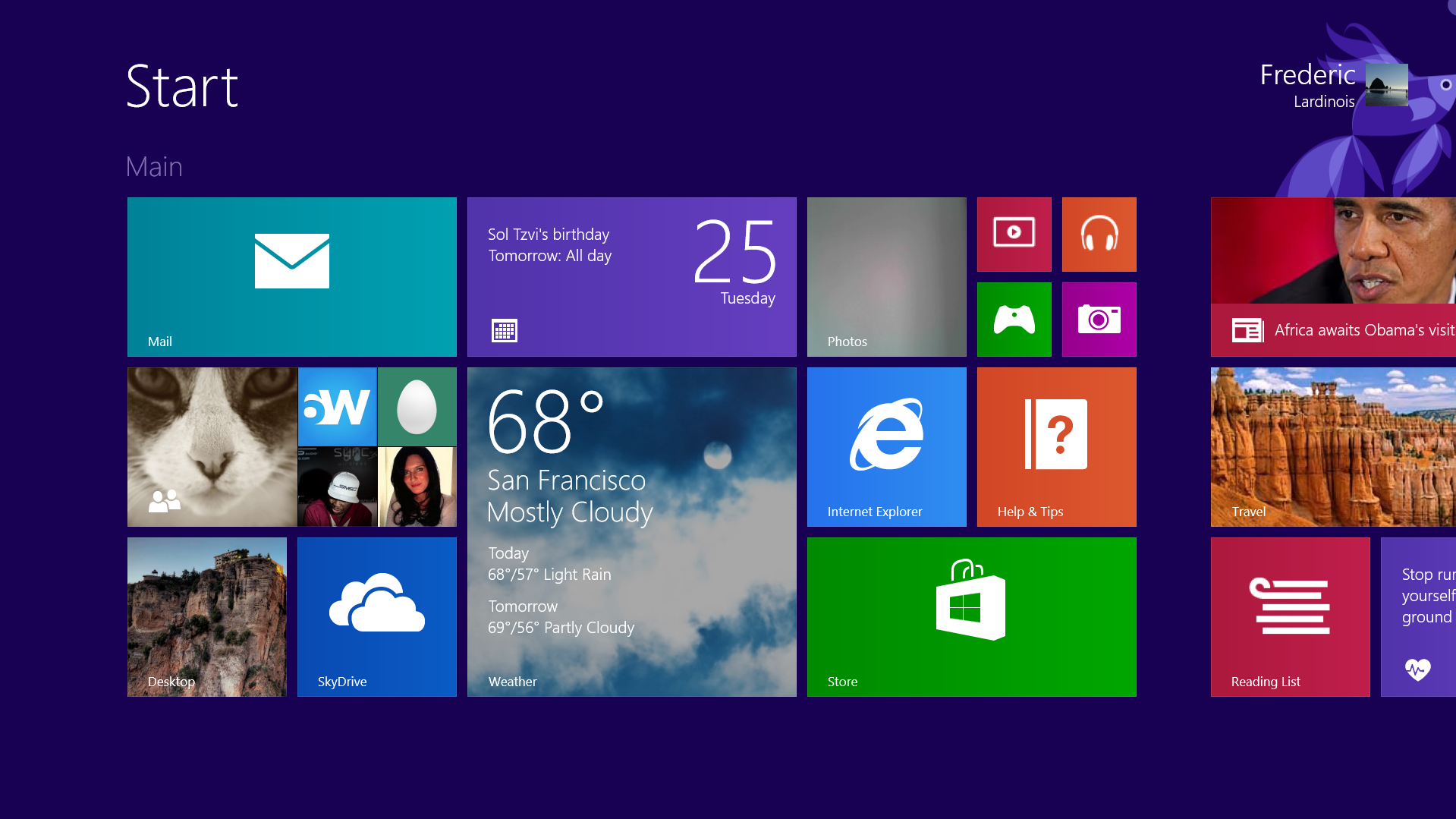 As Microsoft announced earlier this year, it’s also now finally possible to boot directly into the desktop again. When combined with the Apps screen, this allows you to almost completely bypass the Start menu when you use Windows 8.1.

Ahead of the official unveiling, there had been rumors that Windows 8. 1 would also allow users to customize how the OS would handle corner navigation, but so far, it only looks as if the only options are to turn this feature off. 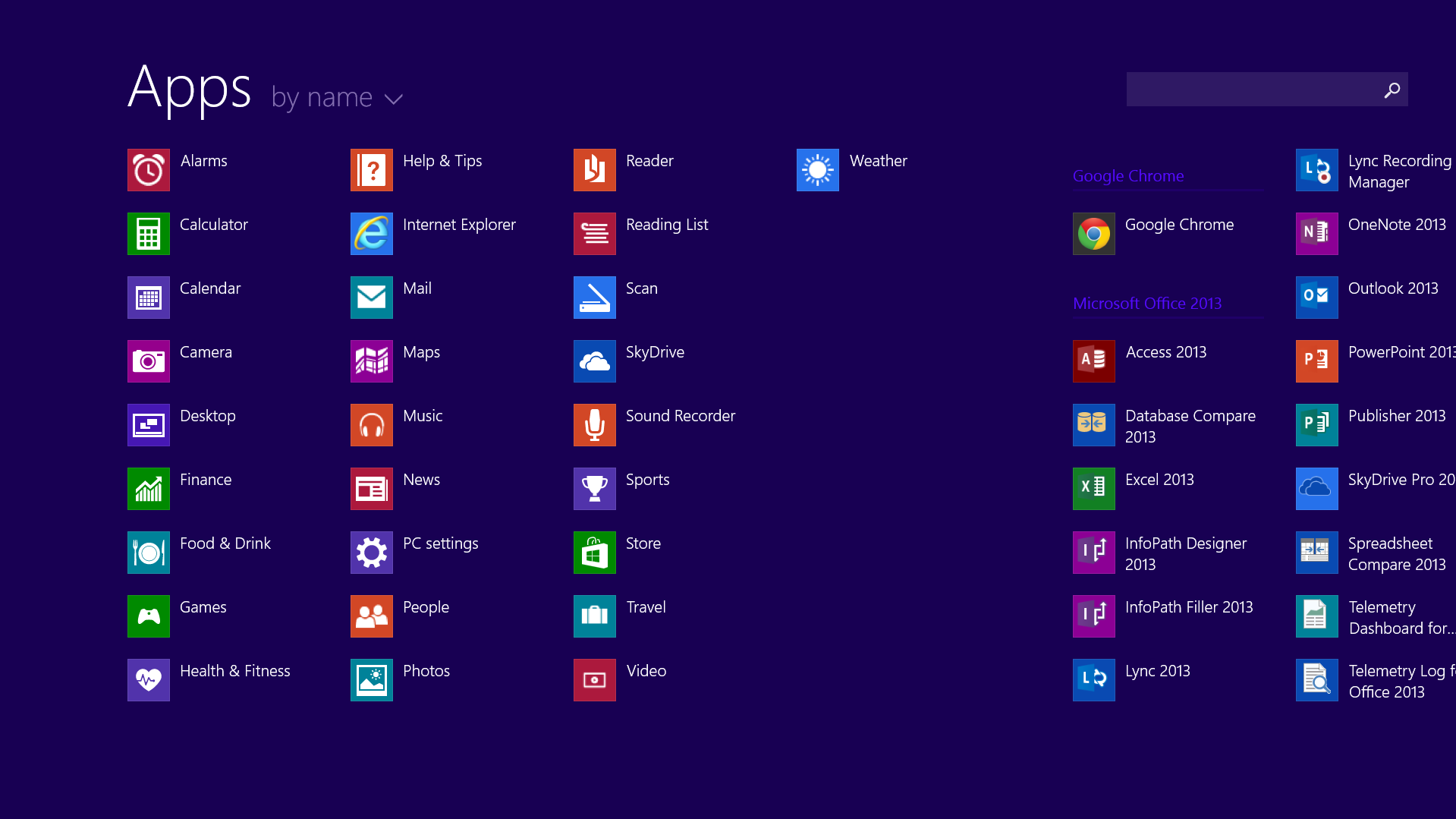 Talking about the Start screen: Microsoft has added quite a few new features to it to improve its usefulness. It’s now much easier to rearrange apps (including multiple apps at the same time), and app tiles can now be both larger and smaller than before. You can also select animated backgrounds for the Start menu (which are actually pretty cool) or choose to use the same background for your desktop and the Start screen.

Another marquee feature of Windows 8.1 is the new search tool. As Microsoft previously revealed, the built-in search tool can now look for way more than files and settings. Instead, it’s now a universal search tool that looks for results on the web (using Bing), your hard drive, SkyDrive, inside your documents and in apps that support this feature. The search charm will, for example, show you results from the revamped Xbox Music service and let you play songs right from the search results. When you open the search results, you can also immediately find links to related Wikipedia entries, see images and, if relevant, nearby attractions, upcoming events and an artist’s songs, albums and similar info. 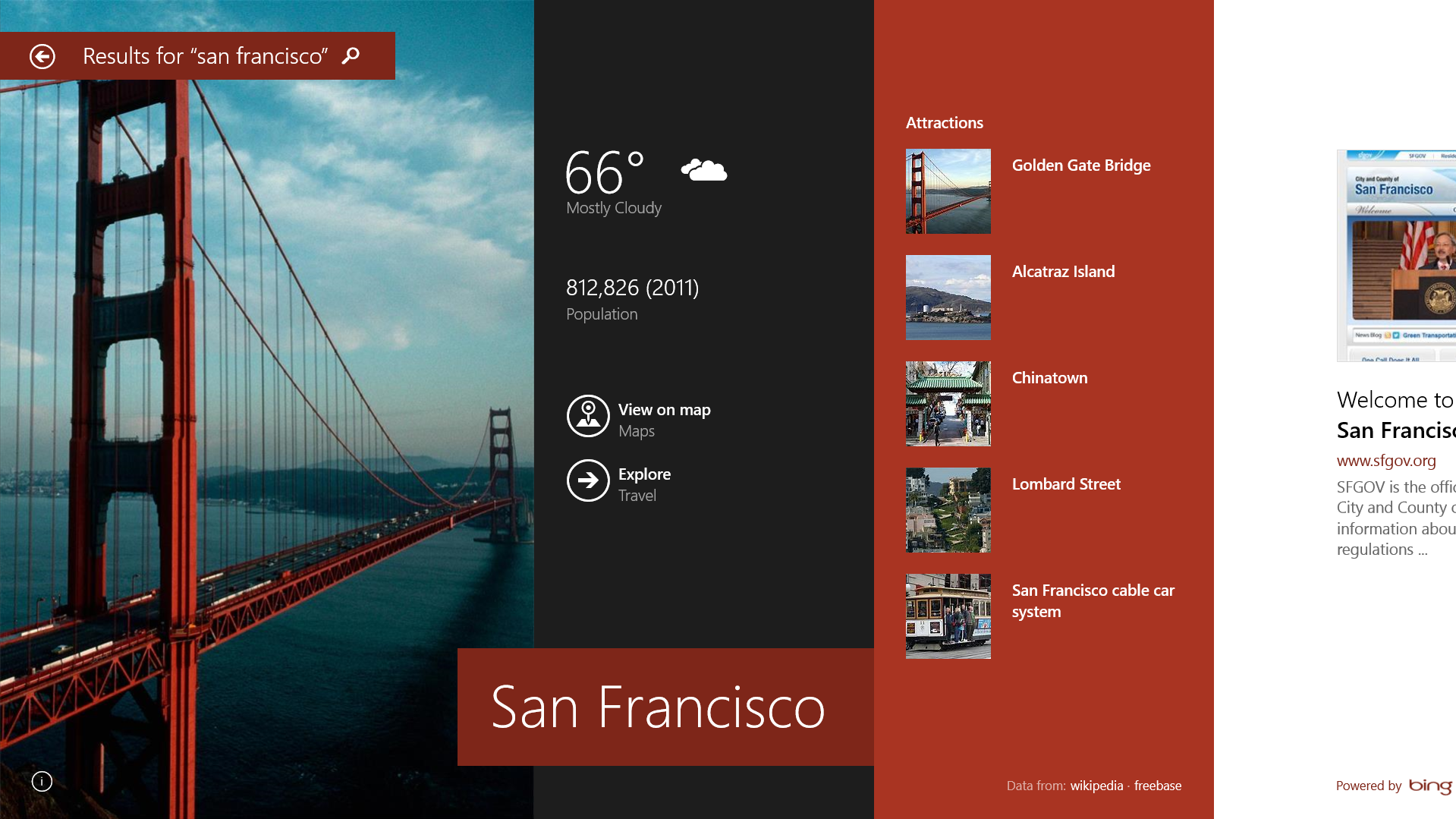 Windows Store Apps: Up To 4 Side-By-Side

The other major change in Windows 8.1 is that when you use two Windows Store apps (previously known as Metro or Modern UI apps) side-by-side, you can now resize these windows at will. Previously, you could only choose between relegating one app to a sidebar and having the other fill the rest of the screen. The other issues with Windows 8 and Store apps was that you could only see two of them at a time and if you had a second screen, these apps were stuck on one screen only. Now, Windows Store apps can take over all of your screens and you can see up to four per screen if your resolution is high enough. The general rule is one app for every 500 pixels of screen width. This is one of the many Windows 8. 1 features Windows 8 should’ve had right from the beginning, but it’s good to see that Microsoft has finally added this now. 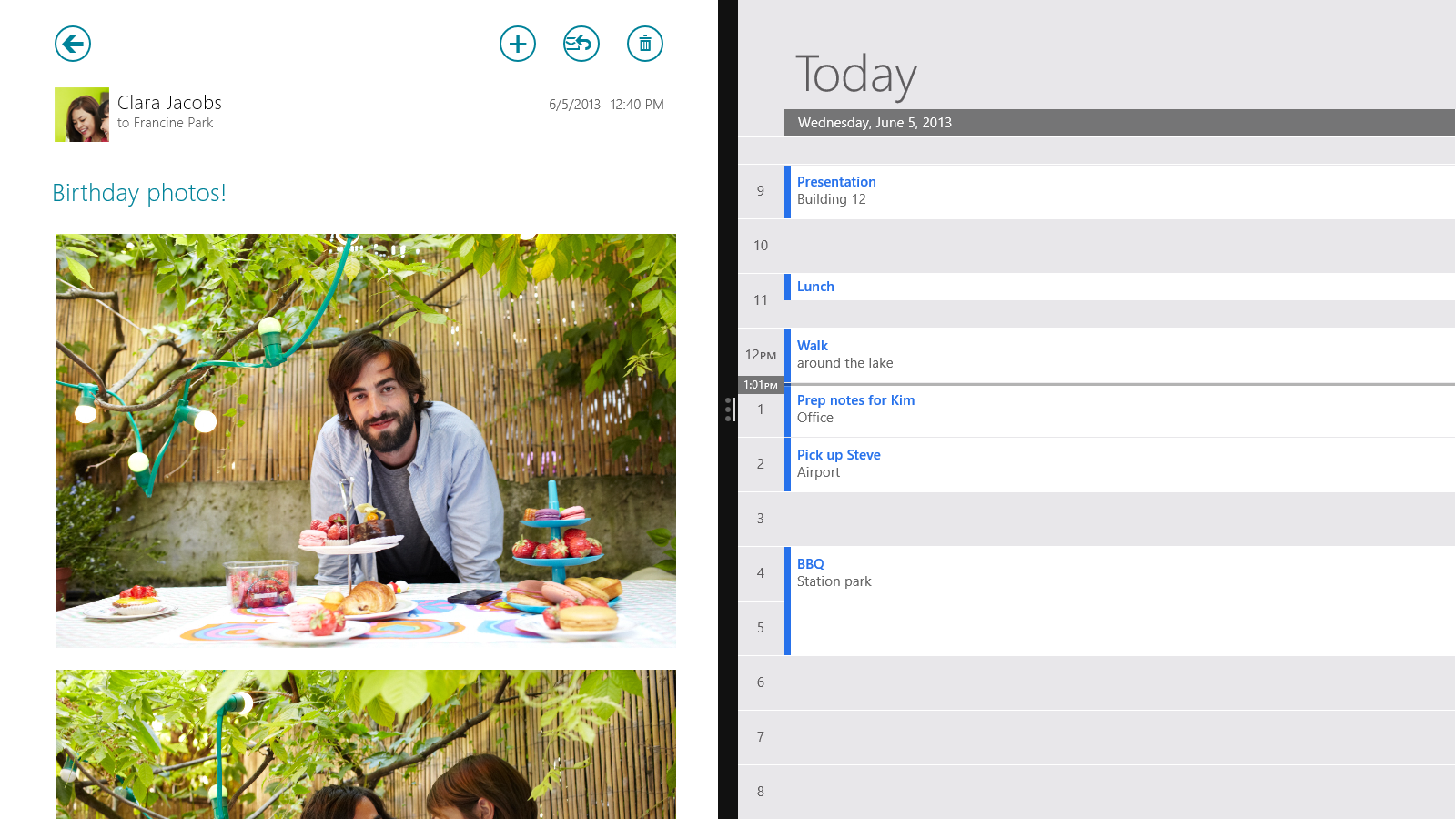 For Windows 8.1, SkyDrive is the cloud. This new version deeply integrates SkyDrive, so you don’t need a separate app for syncing your files with SkyDrive anymore. Many of your PC’s settings are also now stored on SkyDrive, so when you log in to a new PC, everything should quickly feel at home.

It’s worth noting that not every file is automatically synced to every device. Most files will only be available after you have opened them on a given machine.

One feature Microsoft has also added to the SkyDrive app in the Windows 8.1 Preview is basic photo editing with filters and a smart color enhancement feature that lets you pump up the color of the sky or grass in an image. 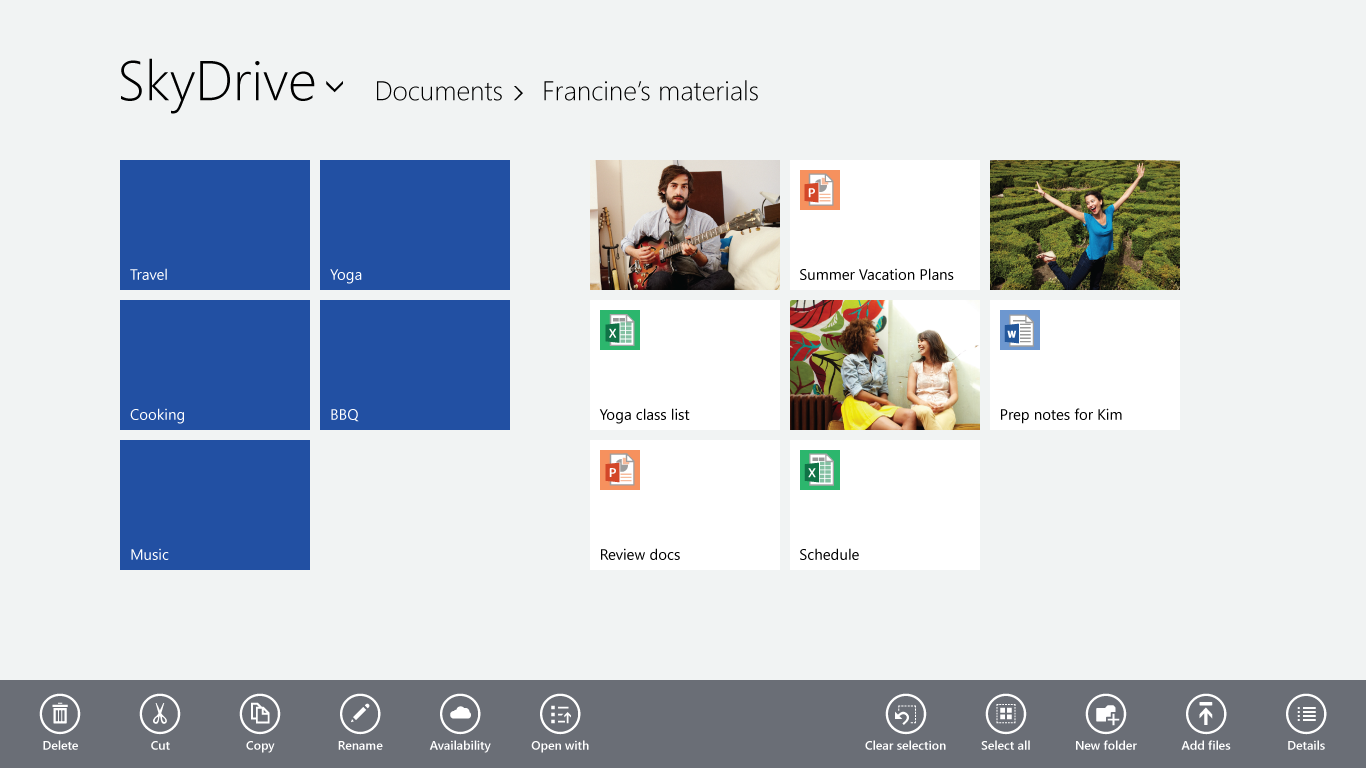 Here is another annoyance Microsoft fixed: previously, when you wanted to switch certain settings on your PC, there was also quite a bit of confusion about which settings were available through the modern UI and which would invoke the old-school Windows 7-like settings windows on the desktop. In Windows 8.1, Microsoft has finally consolidated virtually all the settings you would regularly need in a settings menu in the modern UI mode. From there, you can manage everything from keyboard and Bluetooth settings to how you want to set up your multi-screen desktop and handle SkyDrive syncing with your PC.

With this update, Microsoft is also introducing a redesigned Windows Store, and apps you buy from the store now automatically update when a new version arrives (this is on by default, but you can always turn it off, too). The new store isn’t focused on categories anymore but now stresses app discovery and recommendations. When you open the store, the first thing you will see, however, is an editorial selection of some of the most interesting new apps according to Microsoft. As you scroll to the right, though, you begin to see personalized recommendations (powered by Bing), lists of popular apps and new releases. Finally, the standard lists of top free and paid apps are displayed. You can still get to the categories view by swiping down from the top of the screen (or right-clicking).

With Windows 8.1, Microsoft is bringing the Windows Store to 70 new markets, which takes the total to 191, and it’s also introducing gift cards for loading up your Windows accounts in 41 markets.

With this update, Microsoft is also removing the previous five-device limit of how many devices you could install a given app on. Instead of enforcing a strict limit, Microsoft now uses its fraud detection algorithms to detect cheaters. 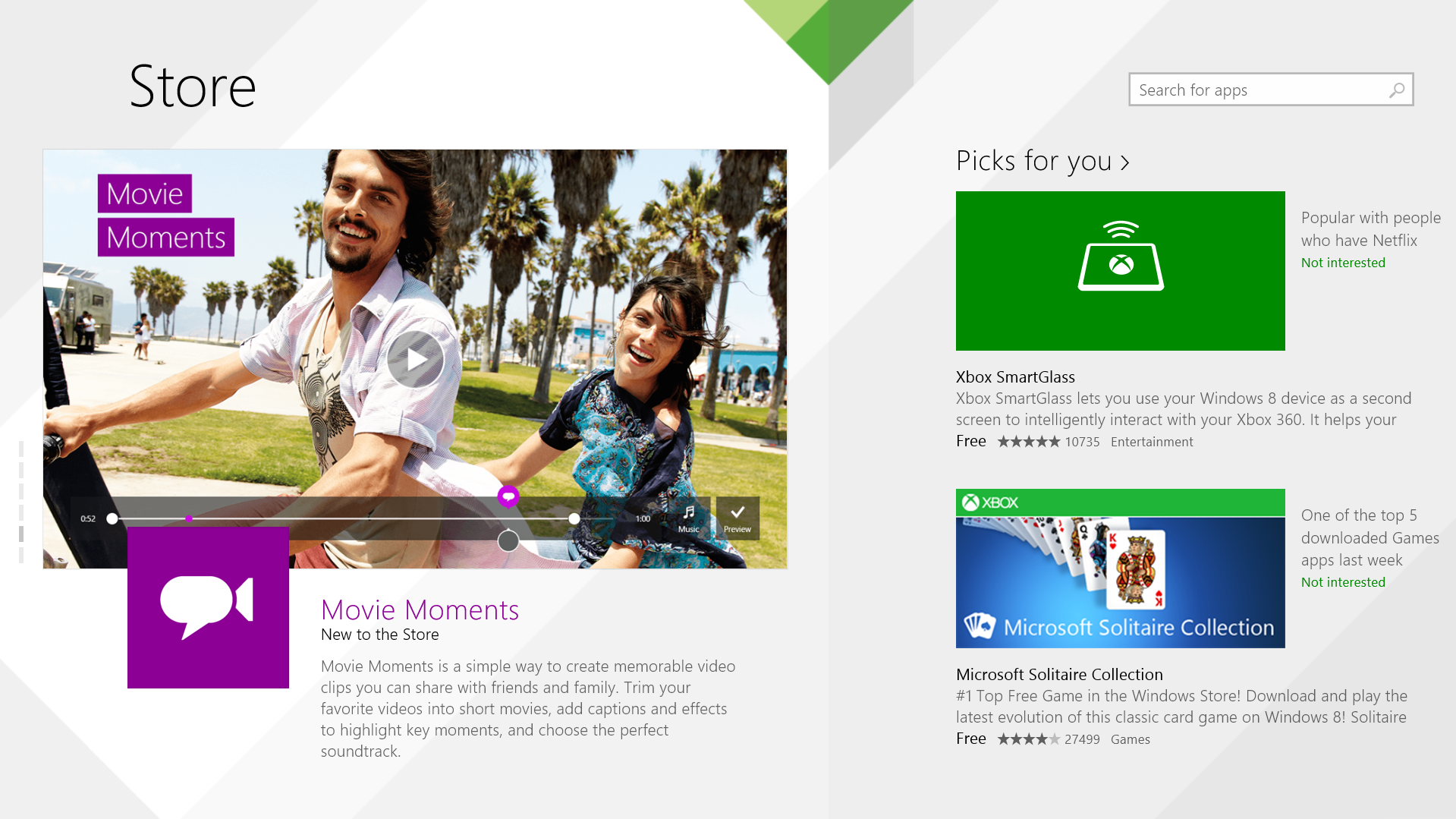 There are obviously plenty of other updates in Windows 8.1 Preview. There’s a new Xbox Music experience with a focus on your music collection and a Pandora-like radio feature, new apps for cooking and fitness and numerous other smaller updates. Internet Explorer 11, for example, isn’t a major revamp of the browser, but you can now open an infinite number of tabs, and bookmarks sync between all of your Windows devices and can even include nested favorites. The Mail app now features automatic filtering for newsletters, shortcuts for finding emails from your favorites and the sweep feature that Outlook.com users are already used to. 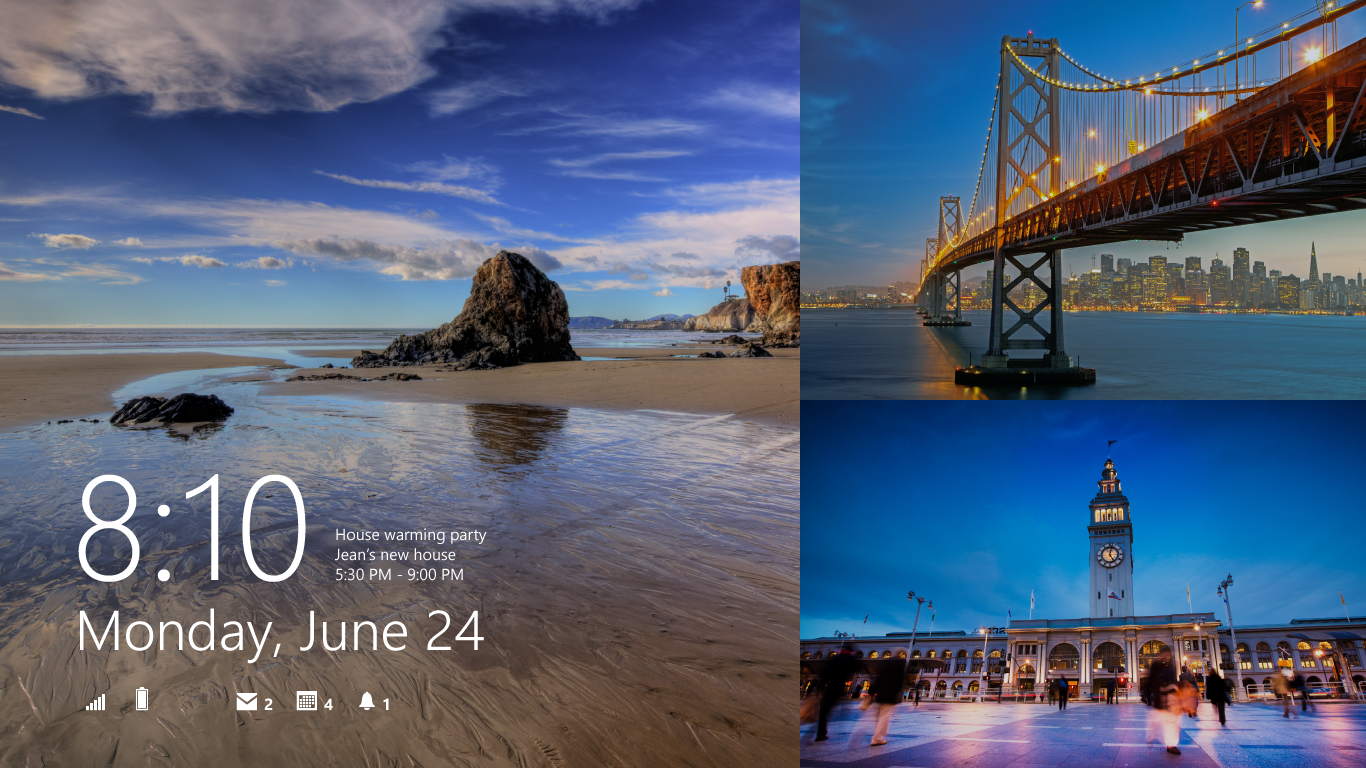 Another cool feature in Windows 8.1 is “reading lists,” which let you bookmark virtually anything from within apps or a browser that you want to get back to later.

The lock screen now functions as a personalized picture frame when you are not using the computer and you can answer Skype calls right from the lock screen without having to sign in.

What Windows 8 Should Have Been

After having spent some time with the Windows 8.1 Preview on a Surface Pro now, it definitely feels like a very robust system already. It’s a shame that many of the features Microsoft is introducing now weren’t in Windows 8 already.