The big number, which is both a nice bragging point for Onswipe and a sign that its data has some broader significance, is 127,733,480 — that’s how many iOS users the company has served in the past two years (as of last night, at least). Back in December, CEO and co-founder Jason Baptiste said that Onswipe was serving 10 million monthly active users, and he told me that number is now in the “tens of millions,” but this is the first time Onswipe has released a total user count.

There are a couple of caveats here. First, Onswipe doesn’t offer a consumer product, so these counts are largely a measure of the Onswipe publishers’ reach — someone who’s counted as an Onswipe user might not think of themselves that way. 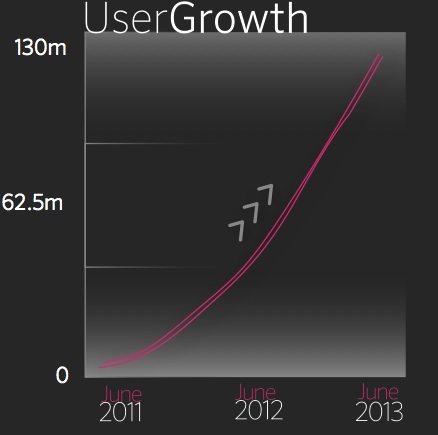 Second, you’ll note that it’s iOS-only. Onswipe has added support for Android tablets and Kindle Fire, but Baptiste said they account for just a “tiny” part of the platform’s total usage. That’s backed up later in the report, which said that, according to monthly unique visitors, 94.1 percent of Onswipe’s tablet traffic comes from iPads, versus 4.1 percent from the Fire and 1.8 percent from Android.

“On tablets, iOS is just where we’re putting all of our time,” Baptiste said. He noted that Onswipe can track the different types of tablet traffic coming to a publisher’s website, so the team can look at the data and figure out if it’s worth the time to support a new platform. “Do we think that could happen? Sure, but there’s nothing that’s telling us it’s going to happen anytime soon.”

He added that on the smartphone side, Onswipe now supports iPhones and plans to add Android support soon.

The other big debate in mobile/tablet publishing is apps versus the web. Onswipe has bet on the web — it builds tablet- and smartphone-optimized websites, not downloadable apps. Baptiste said readers can still access its content through apps like Facebook, Twitter and Flipboard. Nonetheless, it’s probably not surprising that Onswipe sees 67.7 percent higher engagement (measured in pageviews per visit) in the browser than through apps. Perhaps related, Baptiste said that visitors who arrive via search have 32 percent higher engagement than those who arrive via social.

A couple more fun stats: The report says the top US city for Onswipe is New York, followed Los Angeles and Chicago. Onswipe traffic peaks at 10pm, and the most popular days are Monday, Tuesday, and Wednesday.

Baptiste said Onswipe will start a Sage report every month. You can read the first one below.