Microsoft and e-commerce platform Deem, which is still better known under its previous name of Rearden Commerce, have inked a partnership that will allow Microsoft to distribute Deem’s large inventory of local deals on its properties.

While you probably haven’t heard of Deem or Rearden, the company is currently valued at $1 billion and has received over $340 million in VC capital and investments since it was founded 13 years ago. Microsoft will feature Deem deals and offers from its network of more than 1.2 million merchants on properties like Bing, Outlook.com and MSN, as well as in Windows Phone and Windows 8 apps.

As Deem’s founder and CEO Patrick Grady told me, his company takes a very different approach to offers and deals than Groupon, Livingsocial and similar companies in this space. Deem sees itself more as being in the business of “syndicated commerce” and puts an emphasis on hyper-local deals, though it’s also working with airlines, car-rental companies and other national brands to offer campaigns for them, too.

While similar services have huge sales forces, Grady sees Deem as a company that’s driven by tech (and the merchant side is almost completely self-serve). Deem, he says, enables its publishing partners to provide a more relevant experience to their users and provides merchants with an outlet for their offers. It’s targeting engine allows it to find the right offers for the right users, which is clearly also what attracted Microsoft to this deal.

Erik Jorgensen, Microsoft’s general manager of Local Advertising, told me that Microsoft was looking to find better-performing ads for its properties and wanted to bring in local offers to augment its standard text and display ads. Microsoft, he said, wants to “take advantage of the great quality content that [Deem] is able to generate from its merchant pool.” This partnership, Jorgensen said, allows Microsoft to “bring in a type of ad that’s more appealing to consumers” and that’s “seen as more personalized and valuable.”

Microsoft will also index these deals in Bing Offers — its recently rebranded version of Bing Deals. The company will feature these deals across its brands, with the exception of the Xbox console. For users, these deals will largely look like regular ads in, for example, the Outlook.com sidebar. Clicking on an offer takes you to a details page and then on to Deem to make the final purchase.

Here is what Deem’s offers will look like in Outlook.com: 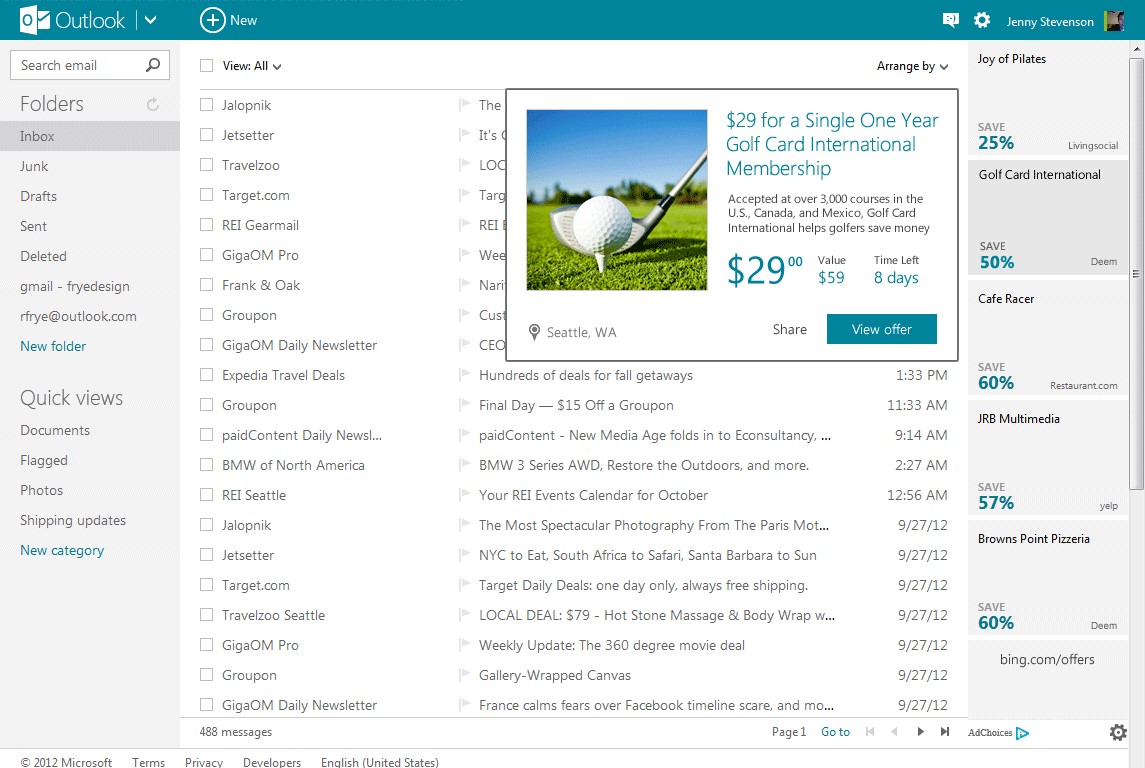