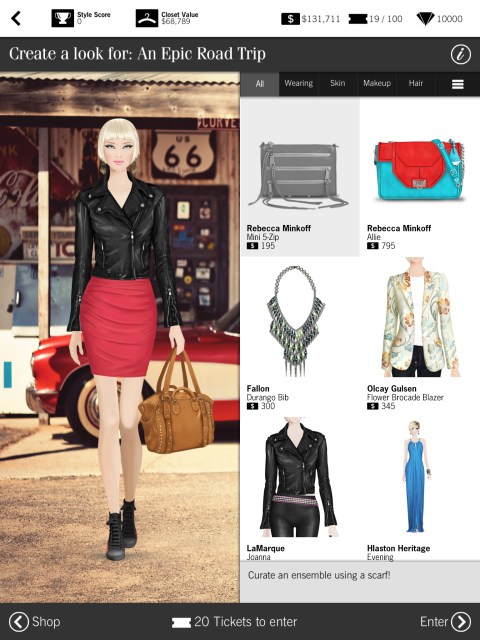 Crowdstar, the social and mobile gaming startup that made a name by targeting younger women with fashion-focused titles, is veering further away from pure gaming with a new app that’s more like an interactive clothing catalogue.

Called Covet Fashion, the app is like an interactive shopping magazine where women can layer virtual clothing on top of a mannequin. It feels like it targets more of a Polyvore-like audience. (That’s the Goldman Sachs and Benchmark Capital-backed site that lets about 19 million users per month create collages of real fashion items.)

People can pick real apparel and accessories from designers like Rebecca Minkoff, Halston Heritage and Cynthia Rowley. They can compete to win actual merchandise and see style advice from designers like celebrity stylist Rachel Zoe, who has dressed actresses like Anne Hathaway and Jennifer Lawrence.

The idea is that this is a better way to grab attention from female consumers on iPads and iPhones than something looks like a traditional fashion magazine. Higher-end fashion magazines have tried iPad apps but many of them are static images of the actual physical magazine pages that people have to swipe through.

Crowdstar’s earlier games like Top Girl and Social Girl already tapped into the behavior of dressing up and creating virtual looks, but Covet takes it a step further.

The app is not supposed to feel like a game and that’s because the company wants to broaden the potential user base to even more women who might not consider themselves social gamers.

“It’s more like 70 percent photographic. It’s not at all a cartoon,” said Jeffrey Tseng, who is Crowdstar’s CEO. “While we believe that gaming is for everyone, there’s a certain connotation around games. Everything abou this app is designed not just to be a game, but also a shopping and content experience. Maybe a person will fall in love with a certain piece and eventually buy it.”

Every day, users get a certain virtual allowance that they can have to buy different dresses and clothing. But the virtual currency part of the app isn’t really the focus. Crowdstar isn’t trying to create the same kind of “grinding” or time-consuming game mechanics that many other developers use to get players to spend more.

He added that the higher-end brands didn’t feel like the app potentially tarnished their image of exclusivity.

“When they saw what we built, they felt it really did align with their brand. The look and aesthetic don’t really have a cartoony feel at all,” he said. He added that even though social gamers may be stereotyped to less discretionary income, “People do splurge on pieces that fall in love with.”

The app is coming out in late June, and it’s being tested in different international markets.

Crowdstar has taken $46.5 million in funding, including $12 million in a round earlier this month meant to fund this project and another game. The company has been around for several years and was an early player on the Facebook platform before it transitioned to iOS and Android. The company is backed by Time Warner and Intel Capital.