BabyList, the online universal baby registry which lets couples request unconventional items – like diaper service subscriptions, for example – in addition to gifts from around the web, has raised $620,000 in seed funding from 500 Startups, Okapi Venture Capital, Altair Capital, Chris Messina, Mike Greenfield (co-founder of Circle of Moms), and Mike Seiman.

The service was founded by former Amazon software developer Natalie Gordon, whose son is now just over 2 years old. She says she was inspired to create BabyList out of a frustration with the current products in this space, noting also that “if more women were coding, there would be a much better baby registry experience.”

Gordon launched the site just two weeks before giving birth, but for the first year, it remained something of a side project, only getting around an hour per day of her attention. But after participating in the latest 500 Startups program, she’s now devoted to the startup full-time.

In her case, Gordon said she found the prospects of wandering around a big box store like Babies R Us armed with a scan gun intimidating as an expectant mother. She didn’t know what some of those baby products filling the shelves even were, much less if she needed them. But she did know that she would want someone to walk her dog during those first few months, and she knew she would be trying cloth diapers, so a subscription to a diaper service would be useful, too. 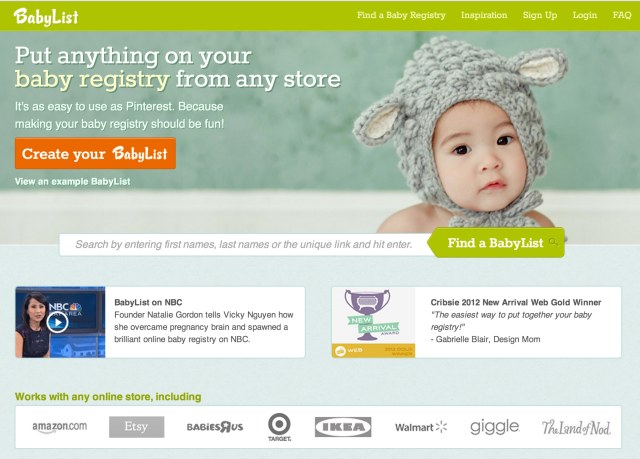 But registries today don’t let you add requests like those, nor do they typically let you register for items across multiple stores. (One exception being Amazon’s universal gift list, of course, but it wasn’t custom-designed for baby products.)

Gordon explains that the difference between BabyList’s product and Amazon’s own universal list is the experience. “With Amazon’s specifically, all the non-Amazon items have smaller images and are at the very bottom of your registry,” she says. “We let you put your items in whatever order you want to put them in. And we’re trying to help you figure out what you really need, and help you find great products.”

With a browser bookmarklet, BabyList’s users can add items to their custom lists from anywhere on the web – including larger retailers like Babies R Us, Amazon, IKEA, Walmart or Target, for example, but also from other sources like Etsy, Giggle, or  Crate & Barrel-owned The Land of Nod.

Since its initial launch, BabyList users have added over 900,000 to their registries. The site has also attracted 10,000 users this year alone. Having generated word-of-mouth interest from mommy bloggers and Pinterest, the latter which is the service’s number one social media site for user acquisition, the now three-person startup will focus on building a complimentary mobile app to accompany the main website. This app will also include the new curated item catalog, says Gordon.

In the meantime, interested expectant moms – or dads, if you choose! Really! If we can work, you can care about parenting! Lean in, dads! – can sign up for BabyList here.