In today’s world of email, social networks, SMS, chat applications and cloud services, there are plenty of ways to share share a file, folder, photo or video. And as intelligent devices and cloud computing infrastructure proliferate, and processing power and capacity improve, we expect file transfer and sharing to be speedy — and simple. Everything is about “realtime” and accessibility these days (not that we’re complaining, but thanks Twitter).

Yet, file-sharing still isn’t quite there. Even with all the options — whether it be the Skypes, Facebooks, Google Drives, WeTransfers and YouSendIts of the world or the Dropboxes, etc. — we’ve still got one eye out for a better way. (Here’s xkcd putting a fine point on it.) The file sharing service to end all file sharing services.

Dropbox has gotten the closest, gobbling up a ton of mindshare as a result, but its layout and presentation are more storage service than simple sharing tool. In other words, you may store your photos there, but it’s probably not where you’ll go if you want to show them off. This week, CloudUp became the latest to join a younger group of services that are pushing the conversation forward when it comes to speed and simplicity — and nibbling at the heels of the incumbents.

Sharing the mantle (most closely) with services like DropLr, CloudApp, Ge.tt and perhaps biz collaboration and sharing services like Dropmark, CloudUp aims to a new spin on file-sharing by creating a tool to make sharing images, links, documents and videos as simple as humanly possible for both the sharer and the viewer.

In practice, that means that CloudUp has a clean, minimalistic look that makes it feel like it’s made for designers, yet is easy enough to use that your mom could get excited about it. CloudUp enables users to share files by dragging them and dropping them into their browser, automatically generating a link which they can then share on email, Twitter, Facebook and so on. 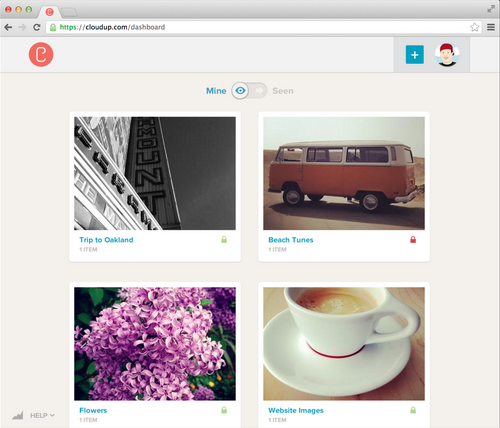 Like Dropbox, the link-centric service is available for free on the Web or as a native OSX app, the latter of which puts CloudUp in your menu bar for easier drag-and-drop sharing. However, CloudUp wants the similarities to end there. Although the service is offering up to 1,000 uploads for free — that’s the equivalent of about 200GB of storage — CloudUp doesn’t want to just be a storage locker or a quick way to share URLs with your homedawgs.

What’s cool about CloudUp (and distinguishes it from most apps out there) is that it focuses on converting the design of file transfer from one that makes it clear that “THIS PRODUCT IS JUST A UTILITY” to one that’s elegant and minimalist, Jony Ive-style. But the minimalism isn’t there for the sake of itself (sorry hipsters), it’s meant to bring more of the focus to consumption — to make the content the focus, not the app itself.

For more than one file, many services use folders, which look and act like the same folder icons you’ve been seeing on desktops since the Apple IIGS. Instead, when you drag-and-drop multiple files into CloudUp in succession, it automatically collects them in a “Stream.” It functions similarly to folders one would find anywhere else, with a more Pinterest-style layout. Nothing is opaque, the app puts it all right there, making things easier to find. (Personally, I can never find files in Dropbox, but that could be because I was dropped on my head as a child.)

CloudUp also does a lot of cool stuff around conversion. The app creates thumbnails for “nearly every kind of file you can imagine, camera RAWS, office documents, code snippets, images, videos and many others,” Cloudup Engineer TJ Holowaychuk wrote on Medium last week. It’s kind of a small thing, so if you don’t share docs or images that much, it probably won’t matter to you, but if you do, this small stuff matters. 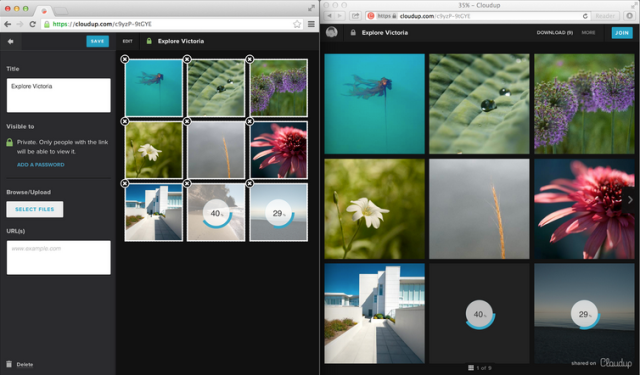 So, beyond just thumbnail rendering, CloudUp has applied some nifty conversion and rendering voodoo on the back-end so that everyone can see them, even if they’re still running IE6, like video transcoding, office doc PDF conversion and image compression so that images appear actually appear on your device.

User streams are also updated in realtime, synchronously, so that even if an image you’re downloading from a friend hasn’t fully transferred yet, you’ll still see it — on mobile, too. And not only that, but you can share a link to a Stream even if it hasn’t finished downloading. Of course, how instantaneous and “realtime” all this is tends to depend on the speed of your browser, but when it works, it’s another big point of differentiation — even if it’s not the one reason you’d download CloudUp.

The team also designed the app not just to be useful when sharing among friends and family, but to facilitate collaboration and productivity among teams as well, CEO Thianh Lu tell us. That, in particular, is something Lu and the rest of the team had been wrestling with for a long time — in other words, this ain’t their first trip around the block. All the EdTech homies in the house know them as the same team behind LearnBoost, a suite of free classroom administration apps for teachers.

While LearnBoost raised $2.87 million from Charles River Ventures, Atlas Ventures and others for its beautifully designed product and its mission to rethink the gradebook, Lu says that teachers were more interested in its Lesson Plan-sharing feature than grading. Teachers were still looking for new ways to share their content, and the more the team fought against the slow sales cycles in K-12 education, they kept coming back to the fragmented sharing problem.

Each member of their team had their own workflow, setup and preferred method of communication and sharing. There wasn’t a single solution out there that let them share and consume files quickly and easily that didn’t offend the eyeballs, so they built CloudUp.

And that’s the same reason that CloudUp’s OSX app attempts to remove the extra steps from the team collaboration process by letting users share files by dropping them on the CloudUp status icon in the menu bar, which automatically copies the Stream’s link to your clipboard so you don’t have to take any other steps. The app also supports automatic uploading of screenshots, which you may or may not think is awesome depending on how frequently you do the ole “shift+command+4” dance.

All in all, CloudUp has a lot going for it and, at launch, it’s already competitive in a crowded space, which is saying a lot. That being said, it still has a long way to go. CloudUp doesn’t yet do simultaneous photo uploading, it doesn’t have native apps, premium tiers or actual team/business collaboration features — it’s more of an idea than a reality. However, all these are on the near-term roadmap, Lu says, and should becoming to CloudUp experiences near you in the months ahead. 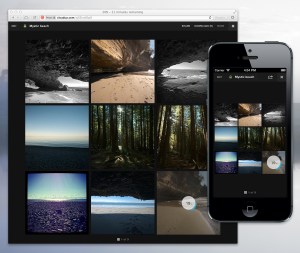 Going forward, the company thinks that its take on file sharing can act as a complement to the Big Storage Kahunas in the space. That’s a smart and completely understandable position to take, but not sure anyone is really buying that. CloudUp is an alternative. Some might think of it as a sexier, frictionless-sharing-focused Dropbox skin and some may get enough use out of their familiar apps that needing an alternative file service sounds superfluous.

But it doesn’t take long to see that CloudUp has nailed the design and user experience. There’s no doubt that this looks better the majority of apps out there. It’s easy to use, and the stream function, instant viewing and link-sharing and the work its doing on the back-end (and front, for that matter) to make conversion and rendering easy pretty much blow Dropbox out of the water.

CloudUp isn’t for the enterprise, and it’s not a place you’re going solely for file storage — in that sense, the “complementary” analogy does make sense. Yes, CloudUp will add premium tiers, but it remains to be seen whether the more casual, file-sharing crowd it’s going after is going to be regularly uploading more than 1,000 files. That means, like LearnBoost, monetizing may be a long, bumpy road for CloudUp, at the same time, as Dropbox moves to scoop up other awesome, sexy mobile apps like Mailbox and photo tools like Snapjoy, a service like CloudUp could become very attractive.

But, in the end, you’ll just have to check it out for yourself to decide.