The Cannes Lions mega advertising event is in full swing today in the south of France and while Twitter is marking its official presence there with a big sign at the entrance to the main venue (pictured here), and a big data keynote (led by Twitter’s new chief media scientist Deb Roy) to go along with it, it’s also continuing to ink deals. The latest is with Viacom, which joins ESPN, Fox and Discovery among the broadcasters who will link up ads on Twitter’s platform to ads they’re running alongside their programs.

The idea behind Twitter’s ad targeting platform Amplify, first launched in May, is to create ever more, and smarter, links between the two screens to better capture the ever-fickle consumer. Video will be a key feature of Amplify, and is another reminder of why other social media platforms like Facebook are also making video moves (with its hot photo property Instagram expected to add video services very soon).

Twitter’s first Viacom deal is picking an easy target: the two will create social video campaigns that will run on Twitter during the popular MTV Video Music Awards on August 25. Last year’s Video Music Awards, Twitter says, was the most popular news event on its platform last year, with 52 million votes cast via Tweets for the “Most Sharable Video” and the show itself generating 14.7 million Tweets. The biggest peak of the night went to the moment cheesy manufactured pop band One Direction won Best Pop Video with 98,307 Tweets per minute, Viacom notes. That says quite a lot about how Twitter pitches itself as mainstream, and also about how it gets used.

The aim will be, in future, for at least some of those tweets — if not all — to get linked up in two ways. One will be in terms of analytics to help give advertisers and TV companies an idea of what their viewers are interested in. The other will be to figure out when and where they are most likely to see an ad, based on their interactions on Twitter.

“Our technology has automated ad detection. We know where and when each national commercial airs,” Roy noted today during his Cannes Lions presentation. “It’s no accident that Twitter [has] emerged as the prime platform for social soundtrack. It’s live [and] goes hand in hand with TV,” he added later.

Roy, an associate professor at MIT’s Media Lab, came to Twitter via the company’s acquisition of BlueFin Labs, where he was the co-founder, and he made liberal use of his big data chops, with visuals of what he called the “social soundtrack” for different locations that visualized the “noise” coming from them across different times of day.

This is more to try to indicate that this works than to give any huge insight. In Riyadh, Saudi Arabia, for example, the highlighted sections indicate times when people are tweeting less. Those coincide with calls to prayer, he noted: 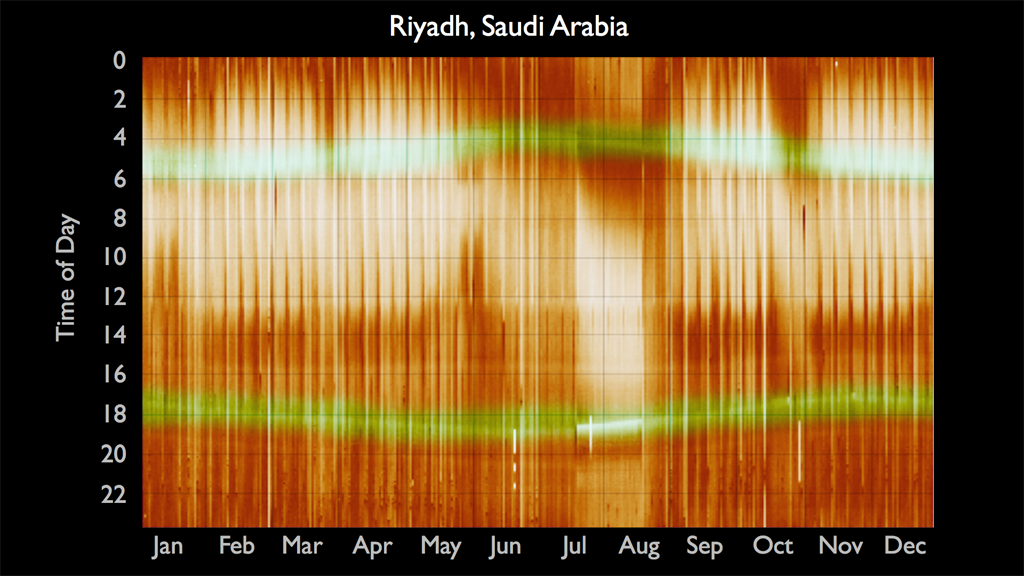 “The VMAs virtually pioneered the social TV moment, triggering a demand among marketers to tap into the fan conversations and trending topics that Viacom networks create every day,” Jeff Lucas, Head of Sales, Music and Entertainment, Viacom Media Networks, said in a statement. “Through this partnership, we’re allowing marketers to insert their brands seamlessly into the torrent of fan activity and engagement around our networks on Twitter.”

“As events happen in life, we continue to see Twitter as the place people share those moments, especially when those events happen on TV,” Adam Bain, President of Global Revenue at Twitter, added also in the news release.