Back when Rockmelt killed off its social-centric desktop browser to focus on mobile, they promised that an Android version was on the way. Today, it arrives.

While the Rockmelt app for Android shares the same “core experience” as its iOS counterpart by focusing very, very heavily on a personalized homescreen that brings in content from your social networks and Rockmelt’s curated stuff, they’ve overhauled the UI pretty drastically.

Why? “Because Android screens are so much bigger”, Rockmelt co-founder and CTO Tim Howes tells me. On the iPhone, most users don’t have too much trouble reaching their thumb across the entire screen. On any of the many jumbo screen Android phones (like the Galaxy Note or the HTC One), however, reaching the top of the screen means using a second hand, unless you’ve got big ol’ sausage thumbs.

With that in mind, Rockmelt’s Android build moves most of its UI elements down to the bottom of the screen. They float around in free space, and fade away as you scroll down the page. Scroll up, however, and the swoop back into place. In landscape mode or on tablets, this UI elements are moved to the lower right corner, so as to be within reach of your thumb. You can see the iOS app and the Android app side-by-side here. 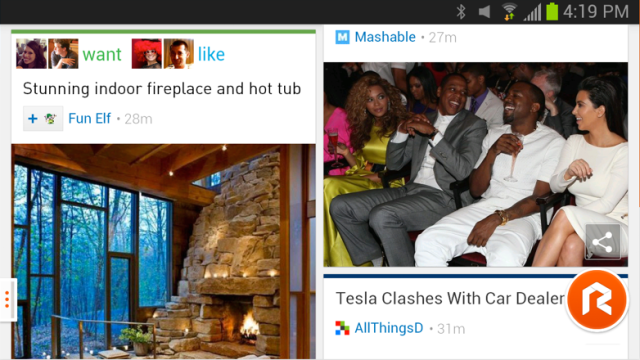 Also new to their Android build is a feature that Rockmelt calls “elevator buttons”. As you scroll through your personalized content feed, a button will appear whenever new content has popped up at the top (or whenever you swipe up a few pixels). Tap the button, and you’re taken back up to the top — but you’ll also see a new down arrow button fade into place. Tap that, and you’ll drop back down to exactly where you were before. This feature only seems to work on Rockmelt’s built-in personalized content feed, not elsewhere on the web — which is too bad, really.

Rockmelt first launched in 2010 as an attempt to bake all sorts of social media functionality (like sharing, chat, and popular content feeds) into the desktop browser. By December of 2012, they’d started to realize that they just couldn’t compete with the likes of Chrome and Firefox on the desktop; by April of this year, they’d cut their losses on the desktop and shifted their focus to mobile.

Rockmelt says around 1.1 million people have tried the service since they relaunched their iOS app a few months ago. Alas, only 1/2 of those people come back the next day.

The company has high hopes for Android, though.

“In 3 weeks, we had as many iPhone users as we had in 3 months on the iPad,” says Howes. “In 3 days, we had as many on our web-based version as we had on iPhone. We can’t wait to see how the nearly one billion people on Android like it.”

I’ve tried both the iOS and Android apps… and, to be honest, I’m not sure I get it. While it definitely has some neat tricks (like a one-swipe ‘Read It Later’ saving feature), I mostly just found myself confused. Then I started getting notifications that strangers had liked the same content that I’d “emoted” (content that I didn’t actually intend to emote with to begin with), and, er, yeah, I was done with Rockmelt.

You can find Rockmelt for Android [free] in the Google Play store here.