iZettle, the mobile payments company that has been described as a European version of Square, is today making a move that places it one national boundary away from the U.S. mobile payment company’s own backyard: iZettle is launching its iOS and Android service in Mexico. This is the Swedish company’s first move outside of Europe, and comes in the wake of a $6.6 million funding round from the Spanish financial services behemoth Banco Santander, announced just last week and made specifically to build out the solution into more markets globally.

Yes, the mobile payments market — like those chilies being sold by the small merchant pictured here, who probably only accepts cash payments today — is heating up.

To coincide with the launch, iZettle is also appointing a new MD for Mexico, Luis Arceo, who had been with Visa.

Jacob de Geer, the founder and CEO of iZettle, tells me that of the many markets where Banco Santander is active — the bank has operations across Latin America, the U.S., Portugal, Germany and Poland, in addition to the UK and Spain, with $1.86 trillion in managed funds, 102 million customers and 14,392 branches — it chose Mexico first for three reasons. 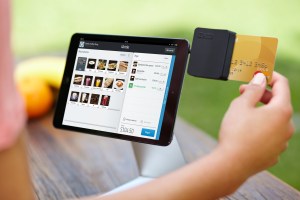 For starters, he notes that nearly all (99.8%) of the businesses in Mexico are small and medium enterprises, iZettle’s target market because, compared to bigger chains, they may be more likely to lack enough turnover to justify the investment needed for more tradition card payment processing services.

Similar to Square’s dongle and those of Here and many other competitors, iZettle’s smartphone accessory lets merchants and other businesses process credit cards using an app on a smartphone or tablet. iZettle’s particular service works on iOS and Android devices, and the company today is launching a new device that is all-in-one for all platforms and payment methods, be they chip or mag stripe. Interestingly, though, it looks like iZettle will be hiking up fees in the country. In Europe, the company charges a flat 2.75% fee, while in Mexico the fee for chip-based transactions will be 3.75% and for mag-stripe 4.75%. On top of that, merchants need to pay $499 (MXN) — about 40 U.S. dollars — for the reader, but Banco Santander customers will get a discount.

De Geer notes that 95% of cards in Mexico are chip-based. That, in fact, may be one reason why Square, whose dongle reads the magnetic stripe for transactions, may have yet to make a move here. (It’s thought that this is one reason why it has yet to launch in Europe as well.)

There is also the Santander angle: the bank is the third largest in the country and “growing rapidly,” deGeer notes.

And the third is perhaps the most contentious of all from a competitive standpoint: “Mexico is an interesting bridgehead given its geographical location,” deGeer notes. “With our new Chip & Mag reader that we’re launching, we could theoretically continue expanding north or south with the current infrastructure.”

Them’s fightin’ words, I think. iZettle, prior to today’s news, had operations in the UK, Spain, Germany, Sweden, Denmark, Norway and Finland. More specifically, in the past, deGeer has made a point of saying that it would not be looking to tussle with Square in any of the markets where it currently operates, which include the U.S., Canada and most recently Japan.

When iZettle picked up $31.4 million in June 2012 (it’s now raised $66 million in total), the intention was to be the biggest player of its kind in Europe.

“Our priority is to get the UK fully launched, and then look at other major markets like Spain, Italy, France and Germany,” de Geer told TechCrunch at the time. “We’re not interested in the U.S. They’re doing really well with Square and others.”

That tune has changed quite a lot in the last year. Rather than ruling out the U.S., now deGeer says, “Time will tell” when and if that move gets made.

Given that iZettle already has services in Spanish because of its operations in Spain, this will make one of the challenges of entering a new market a little less complicated. The backing of Santander will also help with connecting with and marketing to local small businesses. “The biggest challenge for us in any market we want to enter is always to localize the service in terms of language, currency, sign up process as well as finding the right distribution channels,” de Geer notes. “We live in a globalized world but to be successful you still need to act local. For those reasons, we believe our strategic partnership with Santander will be very valuable.”

For Santander, it will be one more way of picking up and locking in customers at a time of disruption across the financial services industry, as behemoths like Visa find themselves disrupted by much smaller startups, with everything else in between. “This partnership extends our offering of payment methods available on Banco Santander’s platform globally, and strengthens our position as the leading bank for SMEs,” noted Jorge Alfaro Lara, deputy general director of payment systems at Banco Santander Mexico, in a statement. “We are pushing the boundaries of banking with relevant technological innovation that helps small and medium businesses.”