It happened to me. Yes, I once uploaded a pic of my friend to Facebook from my phone, forgot to change the setting from “Public” to “Friends” and had the friend get told that day by a random person: “Hey I just saw a picture of you on Alexia from TechCrunch’s wall!” So now I’m circumspect.

Apparently this social media disaster was happening to more people, because Facebook just fixed it — at least on iOS. Android has apparently had the new feature for over a week.

Now iPhone users too are able to easily edit Facebook’s photo privacy settings — by selecting the drop-down arrow on the status update and selecting “Edit Privacy.” Though you still can’t edit the update text or any comments themselves from your iPhone, this is pretty useful. The last time I messed up on a photo privacy setting, I had to access Facebook’s Mobile Web page on a foreign connection to fix it. Not pretty.

In addition to this nod to paranoid people, Facebook iOS Version 6.2 allows users to post the emotion and action updates they’ve come to know and love on the web, including Happy, Sad, Wonderful and, my favorite, Loved.

You can also now start a new conversation with a photo sent to you in messages in Version 6.2, though I don’t think this feature will be remembered enough to see that much traction, unless teenagers are exhibiting some novel group photosharing behaviors on Facebook Message that I don’t know about.

And speaking of Facebook Message, let me take this post about an app update to let you know that a standalone Messenger for iPad is likely not happening, though a trial app was in the works when we reported on it.

Disclosure: I own shares in Facebook, they don’t particularly influence what I write. 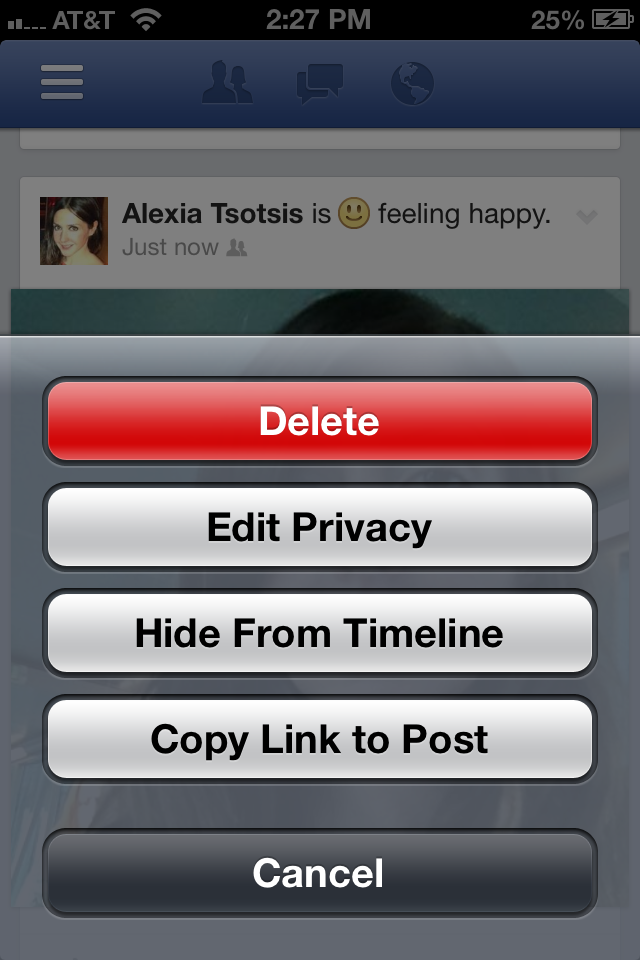