I’ve been lucky enough to have access to a Form 1 3D printer for the past week and have come away with a better sense of the platform, the way forward of 3D printing in general and Form 1 in particular. In short, the Form 1 is one of the simplest and most usable printers I’ve ever used and, barring a few minor peccadilloes, it is well worth the hype — and price tag. 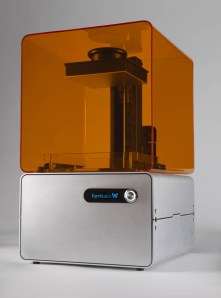 First, a bit of explanation. The Form 1 is a stereolithography machine and this is an important distinction to make. We are probably all familiar with machines like the Makerbot. These machines use fused deposition modeling to extrude a small bead of metal or plastic to “draw” one slice of the shape you’re building over and over again until the object is built. The Form 1 shines a laser onto a metal surface through a layer of resin. Using a process of photopolymerization, the slices are laid down one after the other creating a solid object that lifts out of the resin as it is built. Think of the Makerbot as a stalagmite maker — the material is laid down on a platform — while the Form 1 is a stalactite maker where the object hangs from the platform that slowly moves up.

The objects that come out of the Form 1 look as if they had been injection molded. The layer height of 25 microns ensures that there are no “jaggies” along the object edge and that items that come out of the machine look as solid as, say, a child’s toy. In fact you can see objects made of the same material in stores around the world — it’s a solid, usable, slightly malleable plastic that holds up to abuse.

But the Form 1 itself isn’t a child’s toy. It is a stable, solid, and very attractive lab-quality machine for prototyping and, while usable as an experimentation platform, it is a bit wonky when it comes to printing, curing, and maintenance. In short I wouldn’t recommend this printer for students under the age of, say, 16 but I would recommend it to almost everyone else over similarly outfitted machines.

To make an object you upload an STL file to the Form 1 using a program called PreForm. The program is Windows-only right now, although the team is hard at work on a very usable OS X port. The PreForm software allows you to position multiple items on the build platform and orient them in a position that allows for ideal quality. You then add automatic supports — essentially struts made of plastic — that will form around the object as it builds. Think of the struts as a self-generating scaffolding for difficult parts.

The Form 1 has a plastic cowling that keeps out UV light and hides the laser at the bottom of the machine. The cowling lifts up to reveal a build plate that hangs over a lucite tank. This tank holds enough resin for a few dozen smaller prints, but prints over a certain size require you to pause the print and refill the tank. Running out of resin results in a truncated print but it won’t harm the printer.

Print times are slow for high-resolution prints. The two-inch-high rook — shown below — took about six hours to complete, and less complex prints like an Indian sculpture of Aspara clocked in at 4 hours and 20 minutes. Luckily the printer is nearly silent. Its only sound is a regular, slow clicking as the laser hits the resin, the tank tilts to peel off a layer, and the platform moves up infinitesimally. It is a slow, soothing trance track when compared to Makerbot’s jagged industrial backbeat. When printing at “lower” resolution the print times can fall drastically.

I want to stress that the photos I took of the finish objects are literally just pulled from the curing vat. I did not cut down the small support suture points so as to show a product that has not been modified in any way. The tiny jagged points can be easily cut off and become invisible when you do so. 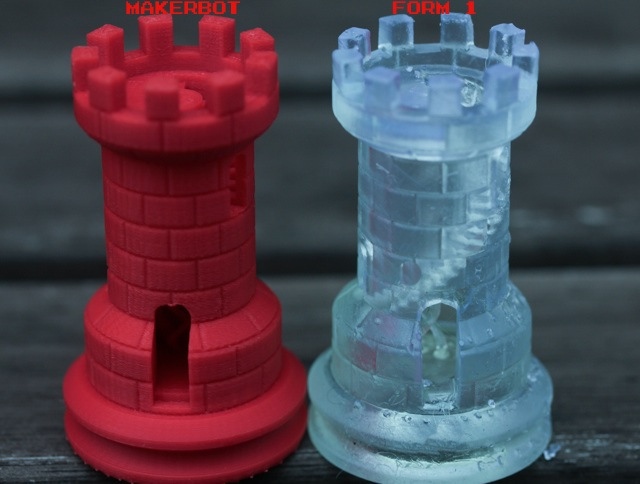 Resin costs $149 per liter and is available in only clear right now. I’ve seen grey resin and it works beautifully, creating a solid, highly detailed print out of pure plastic. The company is working on a “burn away” resin that will allow makers to print objects and then create molds by melting away the plastic, but that is still in the works.

At $3,299 the Form 1 isn’t cheap – but it’s not obnoxiously expensive, either. The Makerbot Replicator 2 is about $2,200 and the intrinsic difference in the technology and the difficulty and quality of manufacture add a premium to the Form 1. 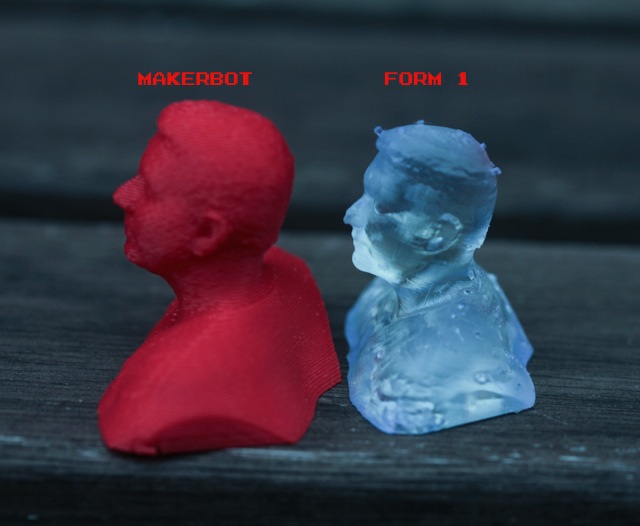 First, a few notes regarding the product. The build space is “tall” but it isn’t wide. It has a 4.9 x 4.9 x 6.5 inch build envelope compared with the Makerbot’s 11.2 x 6.0 x 6.1 inch platform. This means you can make smaller objects with ease or, if needed, chop them up into pieces for later assembly. Obviously the level of detail and smoothness is what you’re paying for here and so we can excuse the device for producing smaller-than-average prints.

Second, you usually print objects with scaffold-like supports poking off of nearly every surface. As you see below, these prints of my head required quite a few supports which left little lumps on the print that can be easily cut off. It’s not a deal-breaker by any means — I’d prefer the object to be structurally solid and deal with a bit of clean up — but it is a little bit unnerving at first. Luckily all of the supports usually snap right off.

Finally, the curing process takes about 10 minutes after finishing a print. This is obviously not onerous and it’s an important part of the system, but having a vat of isopropyl alcohol hanging out near potential heat sources, especially when printing in schools or a home, is a bit unnerving. Again, this is not a deal-breaker but an important consideration when looking at this device over any other.

3D printing, in many ways, is in its absolute infancy. What Formlabs has done is leapfrog over traditional home and open source printers with a unique system for high-quality stereolithography that is priced for the average consumer. While the Form 1 won’t replace a factory-grade machine, it’s definitely as close as you can get without sending something off to Shapeways.

In the end, however, you’ll want to know whether to buy this over a less expensive model or whether or not to build yourself a RepRap or other “free” printer. As a fairly experienced printer, I’d say that the Form 1 is absolutely stellar and well worth the investment if you are working in a design lab or engineering environment. The prints, resin cost, and machine cost add up to a perfect storm of printing perfection. If you are at an educational institution, especially teaching young children, I think the multi-step curing process could be a stumbling block. It is important, however, to understand that the curing process is as safe as, say, running a dark room, so with proper supervision I see no reason why this couldn’t be injected into an educational curriculum. 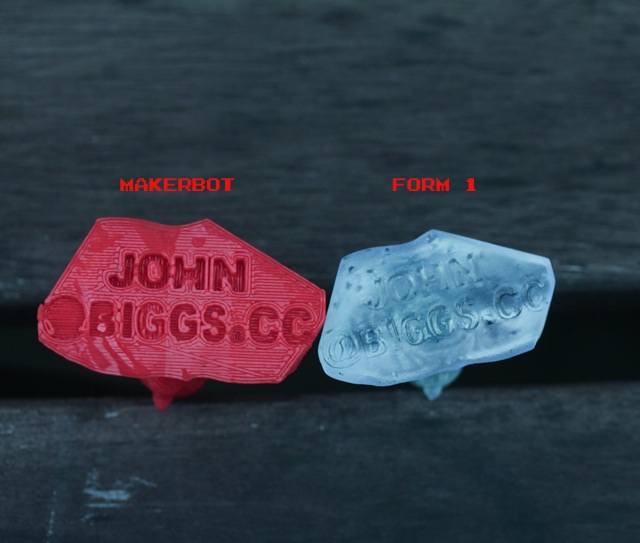 The guys from Formlabs, who, only a few months ago came hat in hand to collect pre-orders for their project, have made an amazing product. It is compact, well-built, and exciting. The prints that come off it are mesmerizingly beautiful and the quality is top-notch. I did have some issues with prints falling off the plate and incomplete jobs but most of those were caused by user error. As printers and the attendant software improve, you begin to get the print you want more and more readily. However, the Form 1 is still in its infancy and so it can be excused a few hiccups.

If you’re looking for something that produces more than acceptable prints using a machine that is a bit less expensive but offers a bit less resolution, by all means look at a fused deposition modeling printer like the Makerbot. The ease of use and inexpensive materials makes them an excellent choice for less mission-critical prints. However, if you’re looking for something that can mimic injection molding and other high-quality manufacturing processes, look no further than this printer. The Form 1 is sent here from the future to show us a new way forward in 3D manufacturing and I’m pleased that I could see it take its first few steps.