As we continue to see more details brought to light in how the government requests and uses information about what we do on the web and on our mobile devices, an ex-Googler and a consumer rights attorney, who have dedicated themselves to helping users remain private, have raised some funding to do this better and in more places.

Disconnect — the startup behind the Disconnect.me extensions for Chrome, Firefox and Safari browsers, which lets users of Facebook, Google and Twitter keep themselves from being tracked by third party sites, and the Disconnect 2 app that covers a wider range of sites — has raised a $3.5 million Series A round.

At the same time, as a measure of dedication to its principle of being positioned not for profit but for social good, Disconnect has been designated as a B Corporation, a semi-charitable certification. With the tax breaks and other help that this offers, it will let Disconnect dedicate time to raising awareness and campaigning as well as to creating for-profit products.

“As a B Corporation, we’re able to spend more time than a traditional company on activities such as consumer education, petition drives, and close collaboration with non-profits,” Gus Warren, a former Venture Partner at FirstMark Capital and part of Disconnect’s executive team, noted in a statement. “Disconnect is committed to benefiting not just shareholders but all stakeholders, including the public.” Warren will run the company’s New York office.

This most recent round of funding was led by FirstMark Capital, and comes on the back of a $600,000 seed round announced in March 2012. That round was led by Highland Capital Partners with participation from Charles River Ventures, and angels including David Cancel, Mark Jacobstein, Ramesh Haridas, Vikas Taneja, Chris Hobbs, and Andy Toebben.

Founders Brian Kennish, formerly an engineer at Google who left to work on this full-time, and Casey Oppenheim, a consumer rights attorney, say the startup will be using the funding first of all to help with the launch of Disconnect 2 for Safari and Opera browsers. 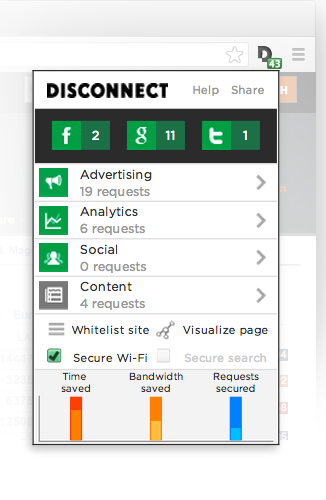 Disconnect 2, launched in April 2013 as a Chrome and Firefox extension, blocks some 2,000 third-party websites that track you across the web. That vastly expands the power of the extension when it initially focused on a handful of portals. Disconnect.me first kicked off when Kennish was still at Google and created the Chrome extension for Facebook specifically, in October 2010.

Kennish notes that Disconnect 2 has gotten more than 250,000 new users since launching in April and that all the startup’s apps combined have more than 1,000,000 weekly active users. Within the current range of software, it is charged on a pay-what-you-want model. “Like Humble Bundle,” says Kennish, who adds, “Some of our upcoming releases will also include freemium features.”

In addition to helping block some 2,000 third-party sites that track users’ browsing histories, the Disconnect 2 extension also helps filter out malware and encrypts data that you share on sites “to prevent wireless eavesdropping.” The company also promises that by cutting down on a lot of the tracking noise, users are actually able to see faster-loading pages and use 17% less bandwidth on average.

“Increasingly, people want to know who’s tracking them online and want to have a say about what information is being collected about them,” Oppenheim noted in a statement. “Our software is designed to put users back in control so they can decide how their personal data is used,” adds Kennish.

Longer term, the company also hopes to focus more on protecting users around the various features of data mining.

“We’ve always thought one of the biggest threats to people’s online privacy is just how big data mining is getting,” Kennish told TechCrunch. “There’s so much personal data being collected about us in so many places now and all that data is susceptible to being used in ways we don’t want. So our goal is to help people minimize the unwanted collection and use of their data. We started by tackling third-party tracking because most people don’t know their browsing history is being tracked by thousands of invisible websites they’ve probably never even heard of.”

Kennish says company is also becoming increasingly focused on security services. “We think there are way too many holes in online consumer security, which recent events have made even more obvious, and we want to help plug some of those holes.”