Editor’s note: Glenn Kelman is the CEO of Redfin, a technology-powered real estate broker backed by Madrona Venture Group and Greylock Partners. He previously co-founded Plumtree Software. His last TechCrunch essays were The Maximum, Beautiful Product and Searching for Beasts in Silicon Valley’s War for Talent. Follow him on Twitter @glennkelman.

Well what do you know! After writing on TechCrunch for the past year about how Silicon Valley’s Gatsbyesque wealth couldn’t find much real estate to buy, Bay Area inventory is up. Bidding wars are down. And rising rates are squeezing buyers who have to borrow money. Below is Redfin’s quarterly rundown of what’s happening in Silicon Valley real estate.

Bidding wars are less intense. Bidding wars are still common, with Redfin agents facing competition on 95 percent of all homes in May 2013, the highest of any of the 21 markets Redfin serves. For example, Redfin Silicon Valley agent Brad Le reports that this nice-enough $2 million Cupertino listing got 12 offers, and likely went under contract in June for well above $2.4 million. But fewer bidders are competing. Since Redfin publishes competitive dynamics for every offer our agents write, we measure the average number of competitors in a bidding war, which has declined from a peak of 16.3 in January to 7.8 in May. As agents, we know that demand is waning not because buyers no longer want a home but because they’ve despaired of ever being able to get one. About one in four of our Bay Area homebuyers have told us at some point in the last three months that they’re taking a break from their search out of sheer frustration.

Also-rans are left behind. The decrease in competition hasn’t changed the pricing of the most sought-after properties. But occasionally, close also-rans languish. Redfin Silicon Valley agent Mia Simon noticed that two nearly identical Mountain View homes, one slightly better looking, sold at the same time last week: The beauty queen sold for $200,000 over asking, drawing all the attention away from its neighbor, which got only one offer and sold for $150,000 less than comparable properties in the area.

Flash sales. The fact that homes are still selling very quickly may reflect a fundamental change in consumer behavior rather than simply a hot market; the median days on market for Bay Area homes that sold in May was 12 days; last year at this time it was 18. Mobile instant alerts triggered by the debut of new listings have been behind this trend, with 302 listings in May going under contract in less than 24 hours. Some of our buyers don’t even like to go into a Costco for too long if it will block the cell signal they need to get instant alerts. This has also put pressure on real estate websites to get inventory quickly. On average, brokerage sites like APR.com, ZephyrSF.com, and Redfin.com get new listings days earlier than national portals; the reason is that the brokerage sites employ real estate agents with complete, direct access to the Bay Area’s four local Multiple Listing Services.

More homes for sale. Higher prices, and perhaps the fear that higher interest rates could dampen demand later, have at last drawn would-be sellers into the market. Bay Area inventory began the year down 59 percent from 2012, but has now improved to the point that it’s only 28 percent down from this time last year; by year-end we expect 2013 inventory to be up year-over-year for the first time since 2011. Redfin’s own Bay Area listing business has increased more than 100 percent over last year. In 2013, real estate’s spring may come in summer, and summer may come in fall. Sales volume will increase, and price increases may lose steam. 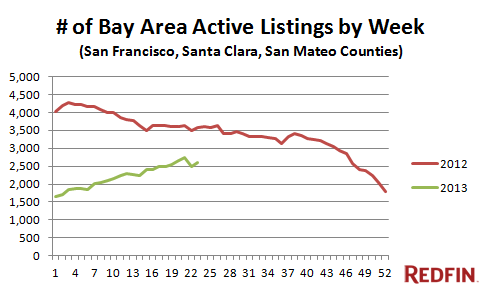 More new construction coming in the East Bay and in San Francisco: Builders are often slow to respond to inventory crunches, in part because it takes time to finish projects, in part to drive profits from a run-up in demand. This is why we’ve seen line-ups, lotteries and camp-outs among buyers competing to get units as they’re released by builders. But four new projects are releasing units this summer in San Francisco, where the total number of homes has barely budged since World War II: 300 Ivy in Hayes Valley, One Rincon Hill Phase Two near the Bay Bridge, The Icon in the Mission, and Linea-built projects in the Mission like Nove.

More inside jobs: We hear more reports of pocket listings, where the listing agent sells the home to one of his own clients or to one of his partner’s clients, without offering the property to the broader market. The actual data suggests that this is common only for homes priced above $5 million. Few sellers at lower prices would ever bypass the larger market, which can draw in enough buyers to spark a bidding war. But there are other types of inside jobs. “Some Redfin clients are trying to get creative,” reports Landon Nash, Redfin San Francisco agent. “I just closed one deal with a client who asked his landlord to sell, and I have another two — which may or may not close — in the works.”

Interest-rate anxiety: With interest rates increasing since May 1, and sharply since May 22, Bay Area homebuyers have felt more pressure to buy a home soon. On June 4, interest rates exceeded 4 percent for the first time in a year. “You know how analytical we can be in the Bay Area,” said Redfin agent Brad Le. “Some of my clients know down to the dollar how much more their mortgage is per month with the current rates, and others already stretching to afford a home have been priced out by the rate increase. The buyers who remain are even more motivated to find something.”

Buyers are withdrawing money from retirement accounts to compete with more cash in bidding wars. In the past week, three different Bay Area buyers did this, despite the penalties associated with withdrawals from 401(k) accounts. Bay Area sellers continue to have a strong preference for cash buyers, to avoid a second price negotiation if an appraisal comes in low from the buyer’s lender. Buyers are also getting help from their parents. Just last month, Redfin clients living in a one-bedroom San Francisco apartment with two small children needed extra dough to avoid being priced out of the Oakland Hills market, so the parents — who were already tired of staying in hotels during visits from the East Coast — just became a party to the purchase. Virtually every Redfin agent in the Bay Area has a story about this.

Surprisingly, fewer for-sale-by-owner listings: Of the Bay Area sales closed in May, 89 percent had been listed by an agent. By comparison, 85 percent of May 2012 sales were agent-listed. Usually, when the market makes it easier to sell a home, more sellers try to do it themselves. But the Bay Area is in such a frenzy that people here are hiring an agent in even greater numbers to play the game to perfection, and to get top dollar. Of course, as real estate agents ourselves, Redfin benefits from a decline in for-sale-by-owner sales. Nonetheless, Redfin’s website is the only one I know of that shows both all the agent-listed homes for sale as well as for-sale-by-owner listings.

A decline in commissions offered to buyers’ agents, from 2.65 percent for Bay Area listings that debuted in May 2012, to 2.56 percent in May 2013. Sellers have been emboldened by the market to offer the buyer’s agent less, with no fear of steering.

A still-exclusive club: Booms usually bring an increase in the number of agents. Not in the Bay Area. In May 2012, 6,008 Bay Area agents represented homebuyers on 9,456 transactions. By May 2013, 5,540 Bay Area agents represented buyers on 8,295 transactions. Because the market here has been inventory-gated, 2013 sales actually declined 12.3 percent, whereas the number of active agents declined 7.8 percent.

What does it all mean? The Bay Area real estate market is getting back to its own version of normal, which still isn’t that normal at all.