Today Boatbound, the Airbnb for boats, launches its service to help boat owners offset the cost of ownership and let more people experience the joys of the water. With over $1 million in funding led by Benjamin Ling and 500 Startups, Boatbound’s listings website lets pre-screened captains rent fully insured vessels across the country ranging from basic motorboats to sailboats to yachts.

Back in February, co-founder Aaron Hall gave us the first interview about Boatbound as it went into private beta. He explained how most boats sit unused for 95 percent of the year, making ownership incredibly expensive for the value it provides. That’s why boats have even more potential than homes for the sharing economy. With a few rentals a month, most boats could pay for themselves with little inconvenience to the owner.

The challenge is making those owners confident that their boats won’t be damaged, and if they are, they’ll be paid for in full. So Hall and his design / UX guru co-founder Matt Johnston have spent the time since we last spoke hammering out the details so they can call Boatbound “the first fully-insured boat rental marketplace.”

Now Boatbound is ready for business and has listings across the country for a variety of boats, with a focus on top boating destinations like San Francisco, Miami Beach, and South Lake Tahoe. Owners set up listings with photos of their boats, descriptions of its amenities, details of its engine and capacity, location, asking price, and availability. Today it will list around 50 boats but it has almost 1,000 already pre-approved that will be added to the site over the next week once scalability is ensured. 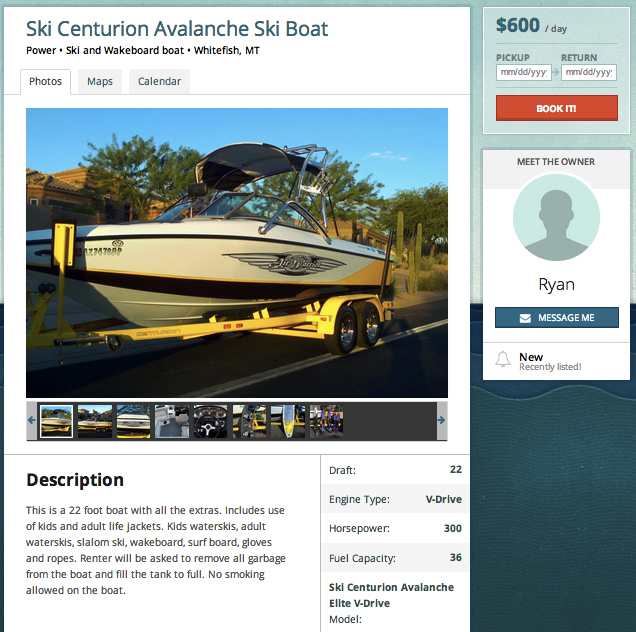 Going rates float from a few hundred to a few thousand dollars a day depending on boat size. The fees pay for comprehensive insurance plans covering boats worth up to $2 million plus an extra $1 million liability insurance. That means any size boat is covered for anything from scratches and dings to sunk ships and broken docks. To make sure that doesn’t happen, renters must be licensed seafarers, and Boatbound can help people get certified if they aren’t yet thanks to its partnership with BoaterExam.

That certification usually costs $30, but now it’s free and heavily Boatbound-branded. Hall says the site will help 150,000 people get licensed over the next six months, which will push lots of traffic to his site. The renters can then browse the listings, find a boat they like, choose dates and pay. Boatbound takes a percentage cut and the owner gets the rest.

Hall tells me he’s excited to see his site become a gateway to the fun of getting away from land with a few friends. He concludes, “If you know people with boats, let them know they can list their boats on Boatbound to make money.”