Salesforce.com is releasing what it calls The Facebook Ads Benchmark Report, which shows how Facebook ads performed on Salesforce’s social advertising service Social.com.

As the name implies, the report’s main purpose is to let businesses see how their ads stack up against the average, so to a certain extent, it’s basically a data dump — and I’ll try to highlight some of the more interesting data in a second. At the same time, since Facebook announced last week that it’s going to be consolidating and eliminating many of its ad units, focusing too much on the granularity of one unit versus another can seem like it misses the bigger picture.

In fact, Michael Lazerow, chief marketing officer for the Salesforce Marketing Cloud (and the co-founder of Salesforce-acquired Buddy Media), said there’s a bigger theme emerging, one that will remain relevant as the specific ad units change.

“We share Facebook’s vision that advertising must be re-organized around people,” he said. “In the future, you’ll see that ads with social context continue to perform better than ads with no social context. In less than a year, all ads on Facebook will have social context, and we’re excited about that future.”

Lazerow was referring to a planned change that will eliminate the standalone Sponsored Story ads and instead automatically add social context to any ad unit when possible. To back up his argument that this will be an improvement, he pointed to the report’s finding that units packaged organic Facebook activity as ads, such as Sponsored Place Check-In Stories and Sponsored Page Post Like Stories, saw considerably higher clickthrough rates than average — the Check-In Stories were the highest, with a clickthrough rate of 3.2 percent. (Other ad units, including the Action Story and Event RSVP, had clickthrough rates as low as 0.2 percent — but they have the benefit of being significantly cheaper.)

The report also breaks things down by industry, with telecommunications and publishing showing the highest clickthrough rates (0.919 percent and 0.790 percent, respectively respectively), while advertisers in dating and deals saw the lowest CTRs (0.165 percent and 0.027 percent, respectively) and paid the highest CPCs (cost per click) and CPMs (cost per thousand impressions). And there are geographic benchmarks, too — for some reason Taiwan has an extraordinarily high clickthrough rate of 2.126 percent, while the United States is on the low side, at 0.171 percent. 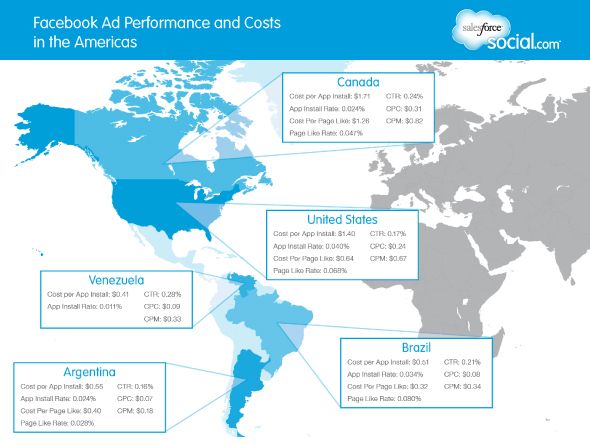 By the way, all this talk about click rates might not be quite what Facebook wants — when Gokul Rajaram, product director of ads at Facebook, spoke at TechCrunch’s Disrupt NY conference at the end of April, he made the argument that clicks are overvalued as an indicator of ad effectiveness and consumer intent. Nonetheless, these kinds of numbers are probably what most advertisers care about right now.

You can see many more detailed charts in the report itself, which is based on a total of 114 billion impressions during the first three months of this year. Salesforce says the report should be live here.