Is there room for another social network for book lovers, now that the biggest, Goodreads, has been snatched up by the largest online retailer (and Kindle maker) Amazon? Slice thinks so. Today, the mobile receipt tracking service backed by Eric Schmidt’s Innovation Endeavors, Lightspeed, Floodgate and others is expanding into a new vertical, with the debut of its second application, Slice Bookshelf.

Like the company’s flagship application, the new service also takes advantage of Slice’s proprietary email-scanning technology, which it previously leveraged to give users insight into their purchasing behavior and alert them to upcoming shipments and deliveries. That application isn’t going away, says Slice CEO Scott Brady. This is just an area the company wanted to dig into deeper.

Brady declined to disclose Slice’s download numbers of active users, but noted that in the almost 18 months it’s been on the market, the app has categorized around 75 million purchases, equating to $2.5 billion in consumer spending. Today, the company licenses its technology to other applications on both web and mobile, and is also now entering into discussions with bigger brands looking to better understand customers’ buying behavior and trends.

“If you think about the power that companies like Amazon have, in terms of the real high resolution they have about customers, we can effectively achieve that same resolution across hundreds of thousands of merchants,” Brady explains of how Slice data can be used.

The new Slice Bookshelf service could also help Amazon’s competitors looking to take on the bookseller giant with similar technology to Amazon’s own recommendations engine — that is, of course, if Slice Bookshelf can achieve enough traction to make its data valuable. 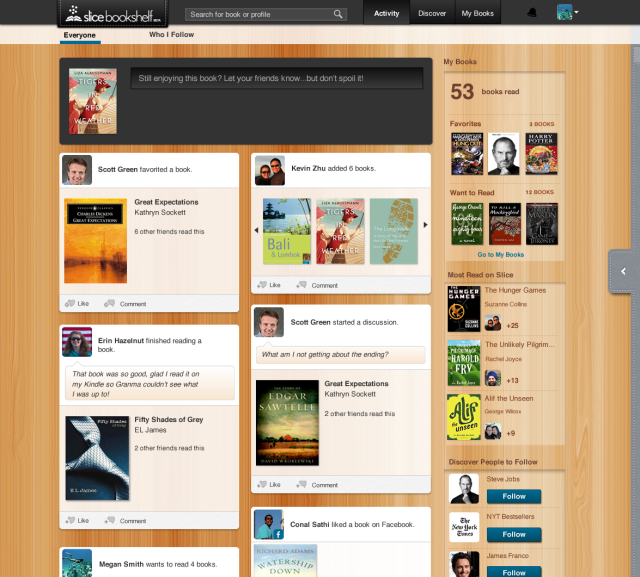 On that front, Slice Bookshelf at least has a shot. Unlike Goodreads, whose book indexing and categorization technology heavily relies on manual input, with Slice Bookshelf the process is automatic. Users simply connect their email inboxes to the service, and it does the work of building your library of books — e-book or otherwise — based on a history of your purchases. For current (or lapsed) Goodreads users, the option to import your books from the now Amazon-owned service is available, too.

In addition, you can connect Slice Bookshelf to Facebook, where it adds books you’ve liked on Facebook, connects you with Facebook friends who share your reading interests, and even enables book lending requests through the social network.

But Brady insists that the goal here is not to steal market share from Goodreads, despite the similarities between the two services.

“I’m not sure that using this product would make you not want to use Goodreads,” he says. “Goodreads is great if you really want to research a book, or talk about an author with a book coming out. What we’ve tried to do is create a much lighter experience, a more social experience around books that maybe you’d want to use more often. But if you really wanted to go deep, there are many websites you could go to.”

So Goodreads for the masses, maybe? 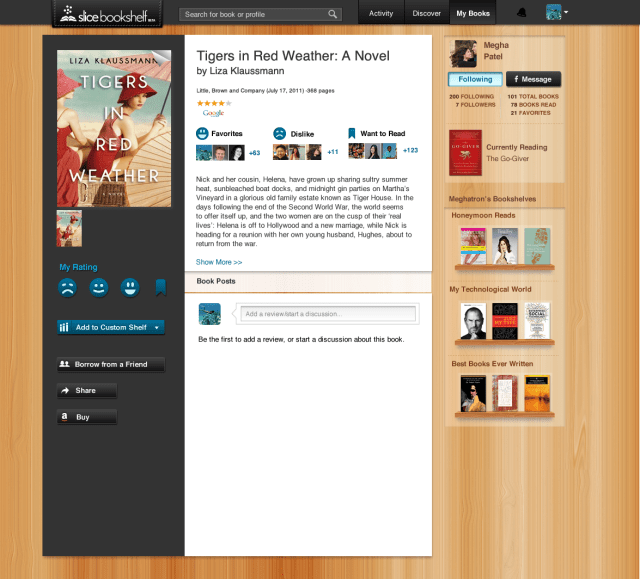 Slice Bookshelf was built from the ground up on the Facebook platform, in an effort to make the service inherently social, as opposed to having social sharing tacked on as an afterthought. By doing so, it not only uses your Facebook profile data as noted above, it can also help you discover who among your network is a reader like you.

“We weren’t sure whether or not ‘friends’ represents the same correlation of books that you may like as well, so we spent a lot of time integrating some very interesting technology that exposes who are the friends that you have that actually have very common interests,” Brady says. The service uses responsive ratings. By asking you if you love, like or hate a book, it finds others who have rated those books in the same way. But this system can also help users figure out who in your network may want to discuss a book, too — someone who loves “Life of Pi” for example could have an interesting debate with someone who claims to hate it.

With Slice Bookshelf now taking advantage of the startup’s core technology, the question is whether Slice will be taking on other verticals like movies or music in the future. Though that’s not something the company is ruling out, its next step is actually to beef up its main application Slice with more “Google Now”-like predictive capabilities instead. Having already been one of the first to use the concept of inbox-scanning technology to help unearth hidden data trends, Brady says it’s time to evolve that concept further, and the company plans to upgrade Slice with new features and core capabilities soon.

In the meantime, Slice Bookshelf is available as a web-only (but generally mobile-optimized) service to start, with plans to debut native apps in the future.