Personal styling and retail platform Trunk Club is going mobile. After finding that around 40 percent of its website traffic is now coming from mobile devices, and around 75 to 80 percent of that comes from iOS devices in particular, the company is today introducing its first consumer-facing native application for iPhone. The app will allow users to access its personalized clothing service while on the go, and it also introduces a number of new features exclusive to mobile customers. 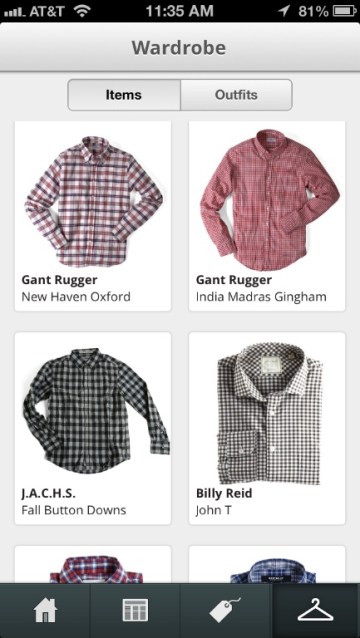 Though customer demand for mobile has been there for some time, Trunk Club’s Director of Products Neil Kamireddy says the startup didn’t want to launch on mobile solely for the purpose of being on mobile — it wanted to establish several use cases for its app first.

That makes sense, because the mobile homescreen is a competitive landscape, and apps without a regular draw may be easily forgotten among the clutter.

To this end, the new Trunk Club iPhone app introduces several new features, including the ability for members to send their stylists photos they snap of clothing they like while out and about, a stream of personalized outfit recommendations that stylists create from members’ own wardrobes of past purchases, and a selection of “Featured Trunks” (e.g. “Spring Blazers”), which fall somewhere in between more traditional e-commerce and Trunk Club’s very hands-on model.

For background, Trunk Club’s service, founded in 2009, has so far been thriving under the leadership of Brian Spaly, who joined as CEO in 2010 after splitting from fellow Bonobos co-founder Andy Dunn over creative differences.

And yes, it is a tech company. 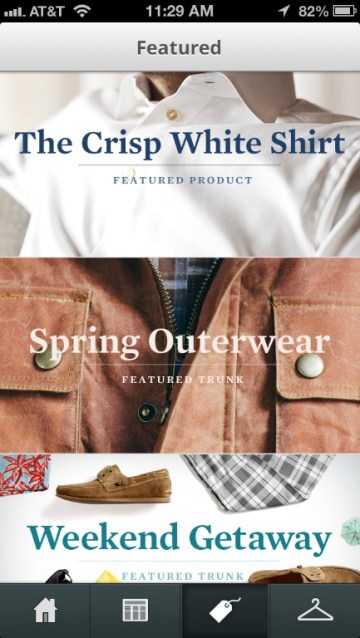 The startup’s premise is about connecting men who either hate to shop or simply don’t have time, with stylists who learn their interests, sizes and needs. Instead of browsing through an online catalog — or racks at a local department store for that matter — Trunk Club members just message or call their stylists to tell them what they need (jeans, sweaters, dress pants, etc.), and a box (a “trunk”) is then prepared. The garments are sent to shoppers, and customers have 10 days to try on the items and return those they don’t like or that don’t fit. Only then are they charged for the clothes.

But underneath the hood, the connection between the customer and stylist is being powered by Trunk Club’s data-crunching capabilities. Stylists, or as Kamireddy calls them, humans “made bionic by technology,” tend to serve as many as 500 transacting Trunk Club members at a time. “Our technology goal is to make this feel very human,” he explains. “The customer may not even notice the technology, but we remember his kids’ names, and what items he returned five trunks ago.” Stylists even have their own internal-use version of Trunk Club’s CRM, also in iPhone app format, which they access while loading up members’ boxes with items.

Mobile Audience May Be Different

With the new consumer-facing iPhone app, the goal is to offer Trunk Club members something that is more like the black car service Uber than it is a shopping site. “The customer presses this button, and then all kinds of amazing things happen offline,” says Kamireddy. 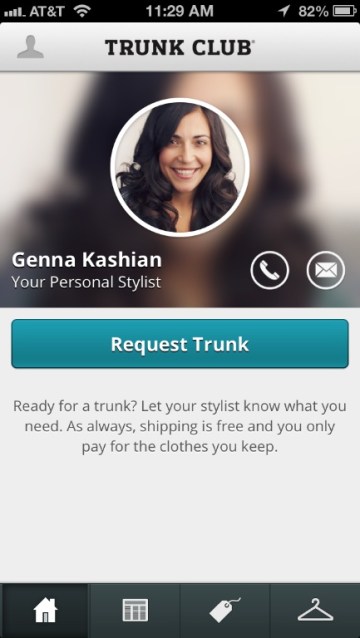 But the move to mobile is also one where a brand known for its hand-holding, interpersonal interactions will have to learn to adapt to a different kind of client — those who are drawn to the convenience factor perhaps even more than the personal service. The startup already has seen a split in its customer base, where some members actively email or call stylists for help, while others almost never want to talk to anyone.

Though no one can say for sure what the growing mobile audience will bring, Kamireddy expects it will be more of the latter. Though the one-on-one connections are still there on mobile, if customers never actually speak with their stylists personally, but only message them quickly through the app, Trunk Club’s long-touted “human touch” could easily become watered down.

That’s why it’s notable that the new app has integrated the stylist’s suggestions with a thought as to how to bring that human touch back to mobile. The app features the stylist’s photo, alongside contact buttons to reach them by phone or email, as well as handwritten comments next to garments. Those comments are only so helpful (“great for work,” “great for layering when it’s chilly out,” e.g.), but they do bring a sense of dialog to the experience, which is critical for the brand if it wants to maintain that it’s worth the premium because of its personal service.

Trunk Club is hardly the only e-commerce startup that’s now scrambling to adapt to an increasingly mobile user base. Last month, Threadflip upgraded its mobile app after seeing 40 percent of sellers’ uploads coming from mobile. And in April, Fab reported a third of its sales were placed via mobile, ModCloth noted a quarter of its traffic came from mobile devices, and JackThreads said that nearly half of its orders were coming in through mobile. And all these numbers are growing fast.

Whether the above, Trunk Club included, will effectively master the transition to mobile still remains to be seen, of course.