CBTec, the e-learning startup founded by ex-Nokians and members of the now-defunct MeeGo team, has released an Android app for its Eliademy MOOC platform that’s also compatible with the widely used open source VLE Moodle. That’s because both Eliademy and Moodle are based on the same codebase, while in addition it provides CBTec with a nice new revenue stream: The Android app is free for Eliademy users, but will cost 99 cents for use with compatible Moodle installations.

In its current form, Eliademy is a free, cloud-based VLE initially competing with legacy players like Blackboard, but CBTec’s broader plan is for it to become a leading MOOC (Massively Open Online Course), pitting it against Kleiner-backed Coursera and many others in the fast-growing MOOC space. To achieve this there’s a heavy focus on localisation from the get-go.

Launched in February this year, the platform is already available in 13 languages and is targeting 40 languages by the end of 2013. Part of this strategy is to help it win in emerging markets and the ‘Rest of the World’, something that CBTech thinks differentiates it from companies who have their origins in Silicon Valley. “We start from the opposite direction with heavy investment in localisation, understanding the different cultures, different education systems they have,” CBTec’s CEO Sotiris Makrygiannis, who was most recently director of applications and site manager of Nokia’s Helsinki R&D center, told me back in March. 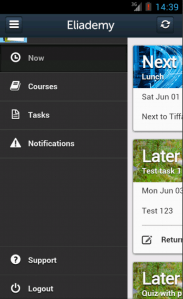 Along with multiple language support — the latest to be added is Latin (yes, Latin!) — Eliademy provides common VLE and MOOC features, such as a CMS for course content, support for file attachments, a task manager, shared calendar, and discussion forums. In addition, it offers a student grading system to enable teachers to get a holistic overview of a student’s progress along with notifications akin to the social networking apps that we’ve all become accustomed to.

Although the platform is based on the open source Moodle, a project that CBTec is contributing back to, it has a much cleaner and more modern design in an attempt to avoid the over-engineering that can creep into any codebase with a large number of stakeholders. And of course Eliademy is cloud-based so that instructors and students just need to sign up.

How then does CBTec plan to make money with Eliademy? Part of that answer comes with today’s Android app, which serves as a way to monetize the much larger Moodle community. The app itself even includes a directory of compatible University Moodle installations and a way for students to theoretically log in to any VLE running Moodle 2.2+ with web access turned on. The bigger plan, however, is to add a course content marketplace to Eliademy, thus unlocking its true MOOC potential. I’m told to expect more on that this September.