Hey kids, there’s a new personalized shopping platform in town. Since it raised $1.7 million in angel funding, ads recommendation system ContextLogic has put its ads optimization technology to good use in a wishlist-making app called Wish.

As its moniker belies, Wish allows you to view a feed of goods specifically tailored to you and add them to various lists on the platform — like my list about Summer. Every time you add to a list or recommend an item, Wish’s natural language processing and machine-learning tech learns that that’s the type of thing you’re interested in and then shows you more of it. Like what happened to me and blingy iPhone cases (below). Yes, I did add such a silly thing to my Wishlist.

On the merchant side, Wish treats Wishlists as intent data and allows shopkeepers to run highly targeted offers through the platform, because of the simple principle that customers are more likely to buy some things they’ve already expressed a desire to buy. I’ve already received an email coupon for $5 off that tacky Swarovski peacock case in addition to 40 percent off a pair of Galaxy shorts I had also expressed interest in.

I’m very likely to buy those Galaxy shorts, is Wish’s value proposition. And Wish in return takes a 10 to 30 percent cut of those promoted sales, which it manages through an AdWords-like, self-serve ads platform. 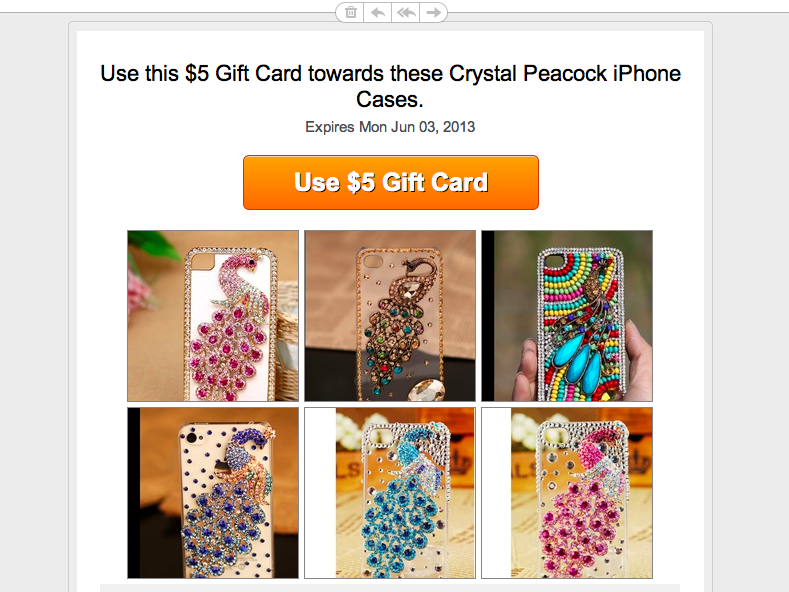 People are adding between 5-10 million items to their Wishlists every day, recommending 250K products and saving 19.3 items on average daily. The app now has over 12 million users and, with five-star ratings on iOS and Android, is modestly making its way up the App Store rankings. It is now at No. 28 on iOS Lifestyle. For comparison, competitors Wanelo and Amazon Mobile are at No. 17 and No. 4, respectively.

“Engagement increased over 2013 as we increased the relevance of our recommendation system,” Wish co-founder Peter Szulczewski says, referring to the startup’s promising growth. “We consider these huge wins and proof that our approach is working.” He believes that after improvements in the relevance of Wish’s recommendation system, the startup is growing faster than Pinterest, Twitter or Google.

“The big change here is that, unlike on traditional e-commerce websites,” Szulczewski says, “Individuals are actually feeding very useful data back into the system in a fun way on a massive scale, which an algorithm can use to vastly increase the shopping experience.”

“I think Wish’s core differentiator is that Wish has a core technology at its roots, which allows the flywheel of ‘intent capture -> commerce’ to be highly optimized by Wish’s algorithms,” investor Jerry Yang tells me, “This approach will be particularly interesting when applied to mobile, where theres a premium for better context and relevance.”

“Google won search via relevance, because it was able to match millions of different queries with billions of web pages better than anyone,” Szulczewski adds. “We are confident that Wish will win mobile commerce with a fun and relevant product, as well, because the problem isn’t all that different from Google’s challenge in search.”

And with everyone and their mother trying to crack the personalized shopping nut, the e-commerce challenge is probably just as hard. Can Amazon ever be dethroned? Will Pinterest capitalize on its vast and intimidating e-commerce potential? Does Wanelo need to go beyond social cures? What about the material things I secretly desire that can’t be gleaned from an algorithm? Glittery peacock cases are nice and all, but clicks sometimes fail to capture what exactly the heart, well, wishes.