Late last year, word on the street was that Ignite100, the £1 million-backed TechStars-styled accelerator based in the UK’s North East, wasn’t going to run for a third year. It hadn’t shuttered completely, having effectively gone into bootstrapping mode itself by renting out desks to the local startups to whom it continued to support. However, news comes today that applications for Ignite100’s third programme have duly opened. It seems that rumours of the accelerator’s death were greatly exaggerated. In fact, I’m hearing that this year’s plans are more ambitious than ever, and include extending the length of the programme, raising funds for a new co-working space, and building a permanent bridge to New York City.

First, let’s delve into the mechanics of Ignite100. Based in Newcastle-upon-Tyne in North East England, UK, the programme runs for 14 weeks — up from 13, to accommodate around two weeks spent in New York — and kicks off in September this year. Funding-wise, £5k per founder (up to a maximum of £15k) is up for grabs for the 10 teams that are chosen, in return for 8 percent equity, which is pretty standard for these things. In addition, pending certain milestones, there’s a further £100k on offer in the form of a convertible note. Ignite100 also promises access to an extensive network of mentors and support, including traveling to London for various workshops, more mentoring and investor meetings as the graduating startups pitch for funding. So far, though, not much unique or different from previous years.

However, the bridge to New York, I understand, runs a little deeper than a fancy fortnight in the Big Apple. More specifically, as part of the programme, teams will spend time in New York City for mentoring and workshops — activity that is being supported by NYC’s Economic Development Corporation. It will also see Ignite100 establish a permanent presence in New York in the coming months to smooth the way to promote participating teams to U.S. investors and seek out opportunities across the pond. This will also extend to Ignite100 alumni as well as other startups based in North East England.

“There is a huge appetite amongst East Coast VCs for European deal-flow,” Ignite100’s Paul Smith tells TechCrunch. “They feel they’re missing out and are keen to have as much access as possible to founders. We’ve been working closely with several high-profile investors and networks since teams visited during last year’s programme.” 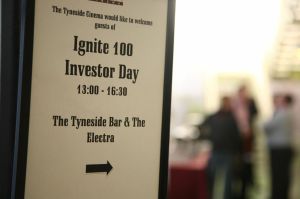 Back home, plans are also being ratcheted up a notch. These include a full follow-on, six-month incubator programme for teams that remain in the region, providing further mentoring and development. In addition, Ignite100 is introducing “sponsors,” whereby each team will be assigned an alumni founder from a previous programme “to support them on a personal and professional basis throughout,” says Smith.

The accelerator is also in the process of raising funds for a new co-working space, styled on Google’s Campus in London. “As well as hot desking and offices, there’ll be venue and accelerator space, and a full programme of events and education activity. The latter will be for professionals as well as primary and secondary school children. As far as I know, this will be the only mixed-use startup facility [in the UK] outside London.”

As for how well Ignite100 has fared to date, Smith says that from the 2011 programme, seven out of nine teams have gone on to receive additional investment. Meanwhile, the 2012 programme has seen five teams raise. Furthermore, together with North East-based The Difference Engine, which Ignite100 succeeded, the combined alumni companies currently employ over 100 people, and have collectively raised over £7.5 million in investment.