Have you ever wished that you could navigate through the apps on the phone as easy as clicking links on the web? Such a thing may now become a real possibility thanks to a new service from Cellogic, called Deeplink.me. In a nutshell, it’s a bit.ly for mobile app deep linking – meaning not necessarily just linking to the app itself, but to a specific page, section or  – in the case of a mobile game – a specific level, within an application.

The link (deeplink.me/yourname), meanwhile, works from anywhere, whether web, mobile web, or any other native mobile application.

It can automatically detect where an end user is coming from and whether or not they have the necessary mobile app installed on their device. If the link is clicked on the web, it would simply point the user to the developer or publisher’s web version of that same content. If on mobile with no app installed, it could be configured to point to the app store or mobile website instead. And if the app is present, it could take you right to the relevant screen.

All of this is configurable, of course. 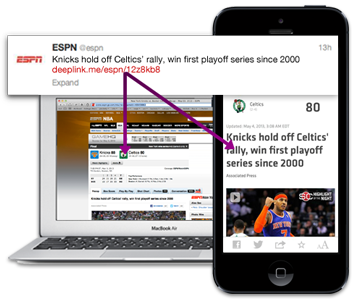 The idea came about as an offshoot of what Celllogic is currently building with Nextap, a content discovery network for mobile applications. Nextap is a much bigger product built on top of this deeplink technology, and, even pre-launch, it has paying customers. These include several large news publishers and a few big-name app and game developers.

During the development process for Nextap, the team decided to spin off the Deeplink tool, which will allow end users to move horizontally through apps.

As Cellogic CEO Itamar Weisbrod explains, Nextap’s customers wanted to use the technology as something of a “bit.ly for deep linking” so they could tweet out links, share them on Facebook, email and elsewhere. 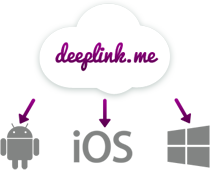 “One of their biggest issues is that they’ve invested so much in these native apps, but they’re still silos,” says Weisbrod. “So we said, well, we have the analytics, we have this platform, we could just give you this one URL and you can generate the links for your apps, and you could then link to specific parts in your apps.”

The implementation requires minimal configuration on the app developer’s side since the function the link is calling is already present. Developers only have to add a few lines of code, Weisbrod says. And on Android, the company offers a sample “Intent” filter, as well, to help developers get started. (Intentions let Android apps kick off a specific action. They’re a part of the Android operating system, which handles deep linking fairly well, in comparison with iOS).

As you may know, the technology which enables app deep linking itself is not new.

In terms of simply opening up apps for you, Facebook has long since pointed its mobile users to apps on their phone from its own mobile application. It has now turned its ability to connect users to apps into a potentially strong revenue stream, as well. And with the debut of new Twitter “Card” types, it, too, has begun to explore how it can move users more seamlessly between Twitter apps and and content found in the broader mobile app universe, including products, photos, videos, articles, and more.

These are only the more recent efforts, however. A lesser-known example called PhotoAppLink, is an older open source initiative aiming to simplify photo editing by tying multiple photo-editing apps together using similar app-linking technology. Plus, an even earlier example came from a company called Zwapp, which tried to solve the problem by launcing OneMillionAppSchemes.com, a database that tried to open source the unpublished custom URL schemes for iOS applications.

Facebook and Twitter’s moves are still somewhat limited, however, and none of those earlier efforts really took off.

Weisbrod says the reason why those initial efforts failed is because there was no impetus for developers to use them. “This is an actual service,” he says of Deeplink.me. “There’s value on top of just being database.” 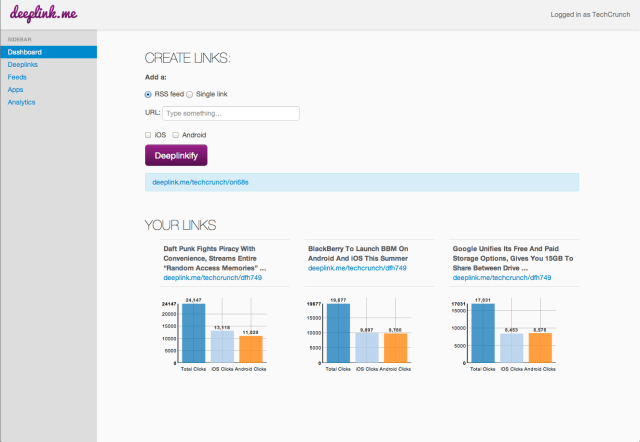 With Deeplink.me, developers will have access to analytics, which details things like clicks per platform, the click-through rates, where users are coming from and more. This analytics feature will be improved in time, and the service will support plugging into other app analytics platforms in the future, too, like Flurry or HasOffers, for example.

Pricing for Deeplink.me has also yet to be set, but it will be a freemium service after the beta period completes.

A handful of Nextap’s customers are already using the platform, after joining a private test a few months ago. Now the beta is opening up a bit further: 100 beta accounts have been reserved for TechCrunch readers who sign up using this link.

This service could help solve some of the problems facing the ecosystem today – namely app engagement and usage rapidly declines after install, as apps are tucked away off of users’ homescreens in forgotten folders. Developers in turn, have to use increasingly spammy push notifications to encourage re-opens. Frustrated, users simply delete the apps bothering them. Having specific, deeplinked app content appearing when users click links they actually wanted to follow could instead be a more natural way to draw users back in to apps.

Though the details of how all this works is technical, if the company can spur adoption – still an unknown – the end result could be something which would allow a more natural way to move through apps on our phones and tablets, as well as from the mobile web to apps. Using apps could even begin to feel more like the web itself – that is, less isolated, more connected.