It’s been a little over a year since Google started teasing something it called “Project Glass.” The futuristic, wearable computer that would change the way that you interact with the world was nothing more than a series of rumors for months before it was “formally introduced” in April 2012. Not known for hardware and not having a current bonafide physical device that was popular among consumers, many opined that this was Google’s way of begging for attention. It might have been, and it definitely worked.

In 13 months, Glass has gone from Star Trek fantasy to reality. It’s been quite the whirlwind of activity.

The “wearable computing” age is upon us, and it’s been widely reported that Apple was working on a watch, therefore many assumed that Google was working on a similar device to keep up. This was not the case and Google’s co-founder Sergey Brin took special interest in the Glass project and has been leading the charge going back to when the prototype weighed about eight pounds in August 2011.

Let’s take a stroll down memory lane, because a lot has happened over the past year in Glassland.

The video from Google itself got sent people’s imaginations into overdrive. It was called “One day…” and gave us a glimpse into the life of a daily user of what Google had up its sleeve. We now know that the “One day…” reference had more to do with what the product could become, not what it would be in its first iteration:

The user experience in this video is aspirational at best, as the current iteration of Glass is more of a complement and utility to your day, rather than the augmented reality “enhancer” as this video demonstrates. Still, the elements that make Glass handy are all there, taking calls, getting directions and taking pictures from a new point of view.

Immediately after the video, and public admonishment that the project was real, the press wondered out loud if Apple should compete and that other companies should stand up and take notice. We also now know that the rumored final name for the device, Google Eye, isn’t likely. Good thing, because it sounds way creepier than Glass. We’ll get to more “creepiness” later.

It was clear that Glass was getting a lot of attention, both positive and negative, from the start. Even Jon Stewart did a parody about them. 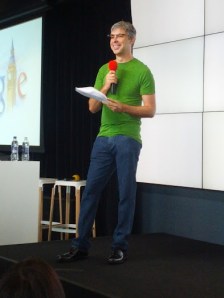 Before Google’s I/O developer conference in 2012, Sergey Brin started showing Glass off to folks like Gavin Newsom. This is the first time that we found out that Glass had a trackpad that would let you scroll through its UI, even though we didn’t know what that UI looked like yet.

Even Google CEO Larry Page got into the act, wearing his pair at the Google Zeitgeist event in London. Was Page making important company decisions without us knowing, using his futuristic eyewear? Probably not, but it was cool to think about.

At Google I/O 2012, developers sat in the Moscone Center not knowing what to expect from the company that has been using its advertising business to fund all types of cool projects. After all, who would have thought that a search and advertising company could actually pull off something like Gmail? Or a web browser? And now a driving car? A pair of glasses? Crazy talk. Well, on June 27, 2012, Google fed into that crazy talk with…a crazy stunt.

The man at the helm of Google X and Project Glass, Sergey Brin, pulled off a stunt so memorable, that many of us in attendance still don’t fully understand what we saw.

Brin jumped out of a zeppelin wearing Glass, and participated in a live video Hangout the entire time:

After that, a bunch of people hopped onto bikes and drove into the keynote auditorium. The audience looked at one another, as if to say, “Did this just really happen?”

It was indeed Google’s “Apple moment.”

After Brin took the stage, we were left to wonder if he would then go into full Oprah mode and tell us all to check under our seats for a pair of Glass that would be our very own. Nope. At I/O 2012, the “Glass Explorer Program” was announced, and the first 2,000 attendees that wanted to pledge to pay $1,500 for the opportunity to develop apps for the Glass platform could. 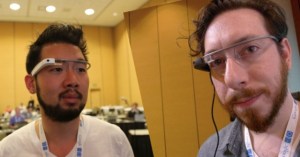 There was no date given for when the device would be shipped, but nobody cared. These things were real(er). Think about it, developers signed up to pay $1,500 for a device that they had never even touched. I was one of them, and even I felt silly. There was something about the cadence that Google had been marching to up to I/O that year that felt right.

Bloggers got to try Glass on for a few seconds, but didn’t get to do anything with them. The hypefest was on. Our founder, Michael Arrington, had a fun, and grounded, thought after the announcement:

After I/O, Google started communicating with its Glass “Explorers” about all of the device happenings, introducing its skunkworks team along the way. Those who joined the program at the conference would get to participate in Hangouts, attend conferences and get exclusive news on Glass. In retrospect, Google set itself up for people to start making fun of those clamoring for the device, whom are affectionately/unaffectionately referred to as “Glassholes.” You see, whenever something is only available to a select group of people, those not inside of that group tend to lash out a bit. Sure, there are those who think that Glass will never amount to anything, but those on the fence had no choice but to attack. It’s kind of like high-school. 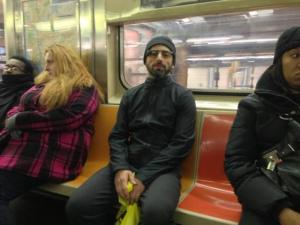 As the months went on, the press flirted with Glass, as more and more Googlers starting wearing them on campus. Stories about Microsoft’s “Glass” plans and a reminder of Apple’s wearable tech patents were peppered in, too.

In late 2012 and early 2013, Hackathons were announced, Brin rode the subway wearing Glass and its API, dubbed Mirror, was introduced at SXSW.

In April, a group of heavyweights in Silicon Valley announced a partnership called “The Glass Collective.” Developers who wanted to build things for Glass, without ads or any means to make actual money, could visit either Google Ventures, Andreessen Horowitz or Kleiner Perkins, and if their project was interesting enough, they could get funding from all three.

It was at that event that Google Glass team member, Steve Lee, let it slip that developers would soon be receiving invitations to pick their pair of Glass up from Mountain View, Los Angeles or New York City. They could have them shipped, but that’s no fun. Glass was officially real.

In just a few days after that Collective event, the first pairs of Glass for developers were coming off of the production line, the Mirror API guidelines were posted, its companion app for Android was released and full specs were released for the first time.

This “moonshot” that Google had been cooking up in its super-secret X Labs were going to see the light of day, outside of Google’s campus’. People just then started to realize that certain folks would be meandering around town with cameras on their face, and focused solely on how the device would affect them…the ones not wearing the device. The ones not in the “club.” A quick search for the term “Google Glass privacy” shows the same story written by hundreds of reporters, most of them never having worn the device.

I was able to pick up my pair of Glass on April 17th, and it’s interesting to see what the device really is in its current state, as opposed to what we saw in the video released last year. We did a “day in the life” video, showing what I was seeing on the display:

While it’s not as “pretty” as Google’s first teaser video, the elements are all there. In its current state, Glass is a utility that allows you to do some of the things that your smartphone does now. The difference with Glass is that you can do these things hands-free, quicker than before and in a less socially disruptive way.

What’s next for Glass?

For a period of time, we’ll see the same types of stories about how creepy Glass is. At this year’s I/O, none of Google’s executives wore the device on stage or while walking around the Moscone Center. It was its way of turning the “lens” onto developers and saying “It’s time to make this yours.” Still, we heard about people wearing Glass in the bathroom, as if to remind us that not everyone is ready to feed into the hype of the device.

It’s hard to argue with the point that the Glass platform is the most interesting one for developers to iterate upon since Apple’s introduction of the App Store. For the first time in years, these developers are getting a chance to re-imagine their existing services, or build new ones, for a new device. Glass isn’t perfect and will only be as good as the apps that are developed for it.

During this year’s I/O, Twitter, Facebook and a slew of others announced their own Glass apps. The Facebook app is great, while the Twitter app will need more work. As I’ve continued to wear the device while I’m not at the computer, I’m finding myself trying to get away from all of the crazy and unnecessary notifications that I get on my phone and desktop. The Twitter app, for example, sends me mobile updates that I’ve subscribed to, @ replies and direct messages. This simply won’t fly, and Glass users are going to need more granular controls for what pops up on their displays. It’s early though, and these are good learning experiences.

No matter what you think about Glass, you have to admit that the past year has been a good one for Google and its fancy, futuristic device. From a secret pet project to developer-only playground, it will be fascinating to see what happens next in Glassland. There’s no telling when the device will be available for everyday consumers, but I can guarantee that it won’t be until developers have had ample time to explore the possibilities. I do know one thing: If you’re really worried about being spied on by someone wearing Glass, don’t be. You’re not that interesting.