Silverpop, the marketing tech company that announced $25 million in new funding last month, is announcing a new feature to help customers adapt to all the different ways that people are opening their emails.

The feature, called Email Insights, accomplishes three main tasks, the company says. First, it allows them to preview how an email will look in up to 30 different apps across multiple devices. (It’s working with a company called Litmus to create those previews.) Adam Steinberg, Silverpop’s director of emerging apps, said that there was previously a lot of uncertainty and guesswork in the process — for many marketers, the testing process previously consisted of emailing people they knew with different devices then asking, “How does it look?”

Next, Silverop provides analytics about which devices and applications are being used to open those emails. Customers can then use that data to create emails that are customized based on a user’s “preferred device.” 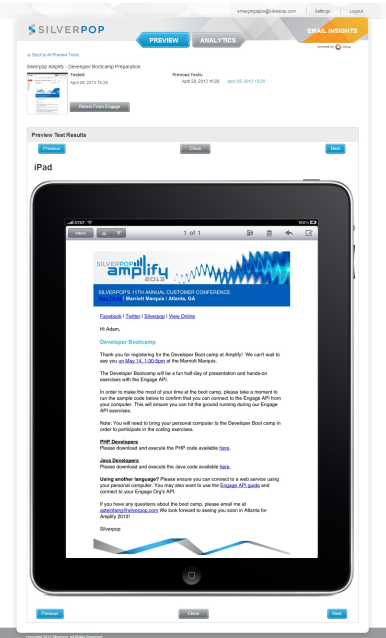 “The marketer wants to know which type of device their customers are using so it can give them a device-centric marketing message,” Steinberg said.

For example, he told me that if an online retailer is launching a new iPhone app, instead of sending the same promotional message to everyone on their mailing list, they could create a special message for people who usually read those emails on an iPhone, with a direct link to download the app.

Email Insights is now available to all Silverpop customers with pricing that starts at $40 per month.