Q: Why does a to do list application need $3.5 million in funding? A: Because it’s becoming more than a simple to do app. Today, Any.DO one of the more popular to do list applications for web and mobile, announced a seed round of funding led by existing investor Genesis Partners, with participation from both current and new investors Innovation Endeavors (Eric Schmidt’s fund), Joe Lonsdale, Blumberg Capital, Joe Greenstein and others.

For those unfamiliar, Any.DO got its start on the Android platform after the success of the team’s first app, Taskos, which proved the market was ripe for such a concept. That app had grown to 1.3 million users by the time Any.DO arrived in November 2011, and today has more than doubled its install base.

Any.DO, however, has since surpassed it. The company says its flagship application now has more than 5 million users across iOS, Android and web. Referencing data from Onavo Insights, Any.DO claims to be the market leader in the to do list app space. (Its nearest competitor, Wunderlist, announced earlier this month having more than 4 million users.) 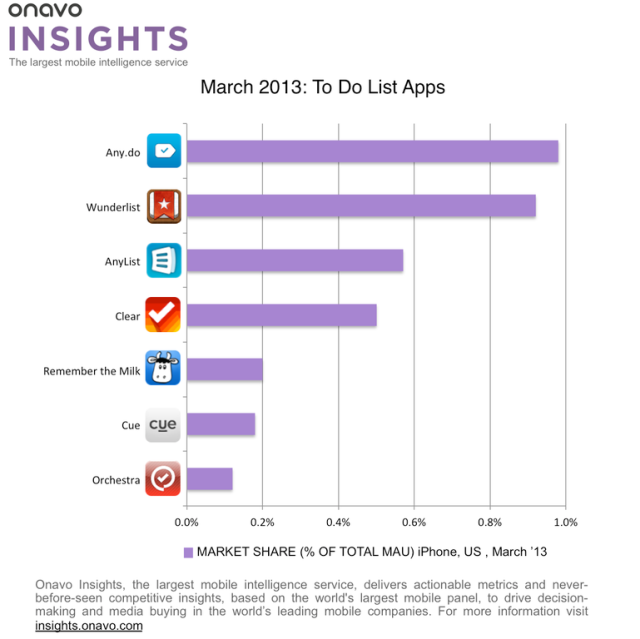 Unlike many apps, Any.DO has more Android users than iOS, having initially taken advantage of that platform’s popularity, its need for well-built apps, and the potential built-in install base coming from Taskos, who were encouraged to switch over to Any.DO when it first debuted.

Any.DO is beautifully designed, which has the side effect of making the app appear deceptively simple. But in reality, there’s some heavy lifting going on under the hood.

“We believe the tools you have on your homescreen are going to be smarter and smarter over time,” explains Any.DO founder and CEO Omer Perchik. “In terms of the to do list…it will help you accomplish the things you have on your list, and we’ve developed a semantic engine that extracts intents and tries to find the relevant action,” he says. “And on the other hand, it’s basically predicting what you’ll be interested in doing.”

So for example, if you tell the app today that you want to plan a trip or workout at the gym more often, it will recommend other applications that will help you complete those tasks, including things like Kayak, TripAdvisor, MyFitnessPal, and many others. Also, if you tell the app you need to do something like “pay taxes,” it’s smart enough to start reminding you about that task in advance of tax day, even though you never provided an exact date or time.

In some cases, Any.DO has affiliate relationships with the dozens of apps it points users to, but in other cases it does not. Perchik says that conversion rates are high – more than three times above the market average of 1 to 5 percent, in general.

Asked whether or not the company had the intention of using the funding to further develop Any.DO or to expand its lineup by launching more apps in the personal productivity space, Perchik says “possibly both.” However, the company isn’t heading into other spaces like email or calendaring just yet, he adds. 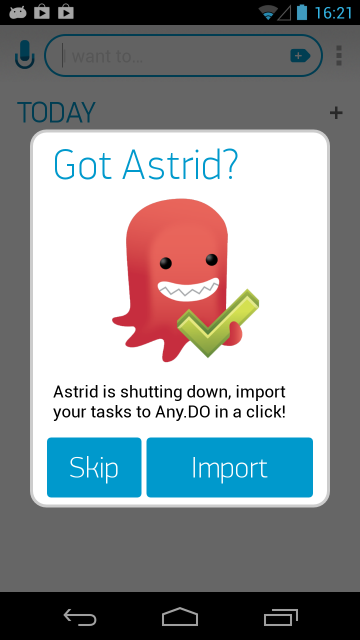 That being said, Perchik did cite the recent trend in startups developing alternatives to the core applications on users’ homescreens – things like email (Mailbox, Triage, e.g.), calendaring (Sunrise, Tempo, e.g.), and messaging, etc. “There’s a lot of things in the day-to-day personal productivity space that are relevant [to us], but we’re less working towards building something like Google Docs or Office for mobile – we’re focusing more on the individual,” he says, defining Any.DO’s interests.

The company will have some announcements around what its future plans may be in about a month’s time, Perchik also notes.

In the meantime, the 12-person startup is using the funding to staff its new San Francisco-based office where Perchik now works. The R&D and product team remains in Israel, but the new office will hire those on the marketing and business development side of things.

In addition, an update to the Android version of Any.DO is rolling out now which will allow Astrid app users (one of Yahoo’s many recent acquisitions) to import their data in advance of the app’s shutdown.