We’re just a few days away from the start of Google I/O, the search giant’s annual developer conference, and while we actually know very little about what Google plans to announce during its massive, three-hour keynote on Wednesday, there is something brewing in Mountain View that has Microsoft’s Office division on edge. Over the course of the last week, Microsoft started a very negative anti-Google Docs campaign that fits the mold of its more general Scroogled anti-Google ads. But why the sudden focus on Google’s productivity tools? That reason, I believe, is Quickoffice in the browser.

Quickoffice, which Google acquired last June, allows users to read and edit Word, Excel and PowerPoint documents on the iPad, iPhone and Android. Unlike Google Docs, which remains a relatively limited productivity suite when compared to Microsoft Office, Quickoffice does a very nice job at allowing you to open and edit Office files without losing the document’s layout and other advanced features that Docs can’t currently handle. Just last month, Google brought Quickoffice to Android and the iPhone and introduced the new Chrome Office Viewer for displaying Word, Excel and PowerPoint files. Google doesn’t say so explicitly, but it’s a fair assumption that this tool uses some of Quickoffice’s magic as well (it was previously only available for Chrome OS).

When it comes to editing Office documents in the browser, Microsoft’s own Office Web Apps are an underrated gem in the company’s lineup, and right now, Google doesn’t have anything in its repertoire of web apps that comes even close. 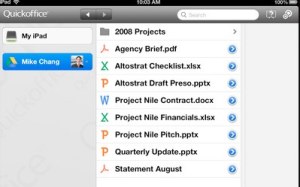 Quickoffice, however, is coming to the web. When Google introduced the Pixel Chromebook in February, it also dropped a hint that it was porting Quickoffice to Chrome, using its own Native Client technology. At the time, Google’s Sundar Pichai said that many people love Google’s productivity apps, but in the business world, Microsoft Office is still the de facto default. Having Quickoffice available for Chrome and on Chromebooks, he said, “completes the story for a lot of users.” During the February event, Google said that it would take about three months to launch the browser-based version of Quickoffice with full editing capabilities – and that puts the launch date almost exactly in line with next week’s I/O.

Microsoft knows that the competition in the online productivity space is about to heat up and may just put it on defense. For many potential Office 365 and Office Web Apps users, a full-blown Office-compatible productivity suite in the browser from a company like Google presents a very viable alternative to using Microsoft’s tools. It’s no surprise then that the folks over in Redmond are launching their anti-docs marketing campaign now.