It’s a rare fall rainy day in Palo Alto and SAP Executive Board Member Dr. Vishal Sikka is as sick as a dog. It’s less than a week until SAP Sapphire in Madrid and the community around him are like a worrying family. I had told them that it is okay. I could make the trip another time. But they were insistent I make the trip.

Fast forward to May. It has been several months since that cold rainy week in Palo Alto. We’re on the eve of the next Sapphire conference in Orlando this week. Last week, Plattner and Sikka held a press conference, announcing the new HANA Enterprise Cloud.

HANA is an in-memory database that Sikka and Plattner developed with a team of about a dozen people around the world. SAP has built four data centers for HANA — two in Europe and two in the United States.

It would not be an overstatement to say that HANA is SAP’s future, the first technology in a long time from the German giant that is getting buzz for what it can do. It potentially puts the company into play as a key developer platform for real-time analytics in the evolving world of technology spanning both consumer and the enterprise services that are the company’s legacy (and slightly stale bread and butter). The big question is can SAP show the world that HANA is a bona fide developer platform with visionary use cases and clear customer examples.

Jon Reed is a longtime SAP Mentor and expert about the company. He is a great sounding board, someone who talked me through a lot of this story. He has a lot of respect for Sikka and Plattner. But he is skeptical, too, as am I about HANA and its direction. The potential is without question. And Sikka shows signs he has that rare combination of intellectual curiosity, technology credibility and passion that makes for a great leader. And he’s a humanist. He is impassioned about the potential for cancer research with HANA as much as he sees SAP transforming from an inward looking business software company to one that is outward facing, used for research and predictive analytics.

“It makes him a compelling figure,” Reed said. “You do get the sense that if the work is not purposeful, he won’t stick around. He really does believe HANA and interrelated innovations can change the world.”

But at the same time Sikka has to address profitability and revenues, Reed said.

Back in Palo Alto, Sikka arrives and he ushers me back to his office and sees that Hasso Plattner’s office is available. Plattner is the chairman of the SAP Supervisory Board and co-founder of the company. Sikka is the kind of guy who gets excited about those little things. Like the chance to look out across Palo Alto from his mentor’s office at the Stanford University campus where he received a doctorate degree in engineering. We sit down and Sikka starts telling me about this accident that changed his life.

A Car Accident In Costa Rica

Sikka had gone to Costa Rica for a vacation with his family in 2008 over the winter break. He was CTO of the company. But he was unsettled about the direction of the enterprise giant. And then something happened on the way back to the hotel after a day by the ocean.

“On the way back I overcorrected and crashed into a pole,” Sikka said in a follow-up interview last month. “Thank God everyone was okay. At that point I realized I had to change something in my life.”

He called Plattner and said it was over — he needed to move on. The son of a railroad conductor, Sikka grew up in India, came to the United States and studied at Syracuse University. He graduated in three years. He then went to Stanford, built a startup with his brother and later sold it. He joined SAP in 2002. But by 2008, Sikka had second thoughts about the company’s technology direction. The accident pretty much sealed it. Or so he thought.

SAP is traditionally an application provider. It made its billions managing transactions but in recent years the disk I/O had become a bottleneck, slowing the application. The amount of data needed to make decisions had accelerated, pointing to the need for better, faster performance and results.

It’s a problem faced across the market. Machine-to-machine data is now more than transactional data, requiring a new approach to the application layer and the underlying database. Sikka had wanted to explore how to solve this problem. Developing a new database was that opportunity. 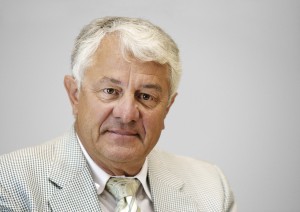 According to Wikipedia, Plattner, a consummate technologist, worked at IBM in the AI department, working on an enterprise-wide system based on the technology Xerox acquired from Scientific Data Systems (SDS). In 1972, after IBM decided to exit the business, Plattner, with four other German engineers, decided to leave the company and continue the project. IBM took 8% in founding stock in exchange for the engineers to use the software. Plattner and his colleagues called the company Systemanalyse und Programmentwicklung (“System Analysis and Program Development”).

Plattner is a different character than many founders. The Hasso Plattner Institute gives him the opportunity to spend tine with students, which keeps him interacting with young people and open to new ideas.

Plattner is also, like Sikka, doggedly persistent. During the winter of 2008, over dinner in Aspen, as Sikka tried to explain that he wanted out of SAP, Sikka said Plattner banged his fist on the table, challenging him to intellectually renew the company. But what did that mean? It took several months to figure out. They knew it had to be something new, something galvanizing. By the summer of 2009 they settled on HANA. The product launched in November 2010 and became generally available in 2011.

As for Plattner, he needed Sikka. Plattner has never really left SAP: although he retired in 2003 he has continued to serve as SAP’s chairman of its supervisory board. With Sikka, Plattner has a technologist who can manage the development of a new ecosystem and commands respect throughout the organization. Sikka, in turn, reports to Plattner, who can provide cover from the political dynamics of this $15 billion company.

This has bred an interesting basis for the development of HANA, which sits outside of much of what the rest of SAP does. It’s not like the two have complete autonomy but it is enough for them to define HANA’s technology direction and fold in its mobile strategy, cloud initiatives and begin the hard work of creating a developer ecosystem and startup culture. To do this, they have a team that operates in a separate wing at the Palo Alto campus, an independence that gives them the flexibility to build out their projects in a way that is different from the other SAP product groups.

When I visited last fall, I met a few of the team members, all hand-picked by Sikka. They are fiercely loyal to Sikka and reverential of Plattner. It’s this that Sikka has used to form the foundation for the intellectual curiosity that Plattner has insisted is so vital to the company.

Out of this, SAP is building its own startup culture. It launched AppHaus, an office that looks like a condominium building set in a neighborhood of the quaint community of Los Altos. Inside they are building consumer mobile apps. Last year, SAP launched a second AppHaus in Dublin. More are planned around the world.

SAP Ventures is seeding startups that are using HANA as the database for their technology. SAP Ventures Managing Director Nino Marakovic says Sikka was instrumental in helping it get started.

So where does this all bring us today?

First, the competition is intense. IBM, Microsoft and impressive startups like MemSQL and SiSense are offering their own brand of analytics. Workday is growing at a clip with consistent updates to its platform.

The SAP Palo Alto campus is where the innovation is happening. But the corporate executives in Waldorf are expecting results. And that sometimes seems like it is slowing SAP’s drive to work more aggressively with startups.

SAP is developing a cloud platform and a platform-as-a-service (PaaS). It’s these efforts and its focus on startups that will create the wellspring and potentially the scale that Sikka needs for SAP HANA to be a success — both in the market and with the chiefs in Waldorf.

And that’s Sikka’s challenge. Creating a company that is compelling and can grow to something far more than was ever dreamed of when Plattner and his colleagues spun off from IBM and created SAP in 1972.