Facebook is not the only company to invest in development of products that take better advantage of the Android homescreen. South Korean messaging app KakaoTalk also recently announced its intentions to release a rival Android launcher. And now,  Highland Capital, Andreessen Horowitz and others have invested $1.8 million into Aviate, an ex-Googler backed intelligent homescreen for Android devices.

The round also included participation from Freestyle Capital, Draper Associates, and other angels, most notably Dan Rose, Facebook VP of Business Development and Monetization, and Keval Desai. The company actually closed on the funding in December, but is only announcing now. The funds will be used to grow the team quickly, and further develop the product.

The company behind Aviate, Palo Alto-based ThumbsUp Labs, was founded in November 2011 by a team with backgrounds in computer science, search and OS development. Co-founder Mark Daiss majored in Cognitive Science at the University of California, and previously founded Pupil, an image based Q&A app, where he also focused on the problem of bringing relevant information to smartphone users when it was most useful.

Meanwhile, Stanford grad Will Choi worked for Google on its front-end search team; and Paul Montoy-Wilson, also a Stanford grad, worked as a Product Manager for the Android Marketplace (now Google Play), and had previously co-founded customer feedback app HaveASec.

Each founder had his own take on how to make mobile phones more effective – Daiss having seen the app discovery and engagement challenges firsthand; Montoy-Wilson with insight into the Android ecosystem itself; and Choi coming at the problem from the search perspective – he wanted to rebuild mobile search from the ground up. 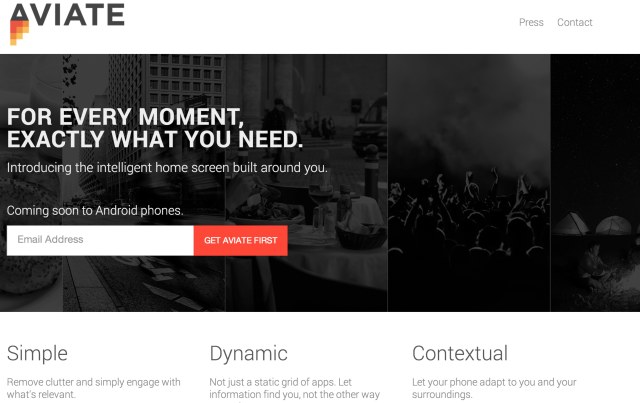 With the Aviate, the goal is to help mobile users de-clutter their Android homescreens, and instead view relevant information adapted to their surroundings, rather than a grid of apps. Where Facebook Home has taken over the Android environment as something of an “apperating system,” to use the term coined by Wired (referring to something in between an app and operating system), the team at Aviate believes there’s more that can be done with such technology, beyond simply optimizing your social networking experiences.

Users today have a number of mobile applications on their devices which they access regularly, and that serve a wide variety of functions. It may not make much sense to give over complete control to just one, such as is the case with Facebook Home. (Early adopters of Facebook Home seem to agree, ranking and reviewing the new app poorly.)

Other means to view app information comes in the form of push notifications and homescreen widgets – neither of which tend to be personalized or contextually aware, outside of location-aware weather widgets, perhaps. In addition, app notifications these days are borderline spam, as developers feel increased pressure to get their app’s users to return and re-engage.

How It Will Work

Aviate wants to be different by working with your favorite applications to pull in information and surface it when you need it. (The app is not yet available for testing, so we can only speak of the company’s intentions here, rather than the real-world results.)

What we do know – and the team is being cagey so far – is that the app will be downloadable from Google Play, and after installation, it will integrate deeply with the phone to upgrade the overall experience. Like Facebook Home, it’s more than an Android launcher. Aviate will organize all your applications for you, and then based on context (time, location, etc.), it will begin to adapt to you individually as it learns what apps you need, when and where.

For example, Aviate will know that when you’re at work, you may need one subset of apps, but when you’re at the gym, you might use another. It also learns what information you need at your fingertips, and surfaces that more proactively, and in a more personalized manner over time. Details on that aspect are still sparse.

Frankly, it sounds a lot like the Google Now concept, but applied to the broader world of mobile applications. Already, it seems like something Google would want to snap up for itself, but it remains to be seen how well it all really works. The company is in the process of filing several patents around the technology now, however, and if granted, those could make the company more valuable in time.

Though obviously Android is where such innovation can take place, Aviate says it has plans for an iOS version in the future.

The app will launch into private beta in the next couple of months. Users can join the waiting list here.