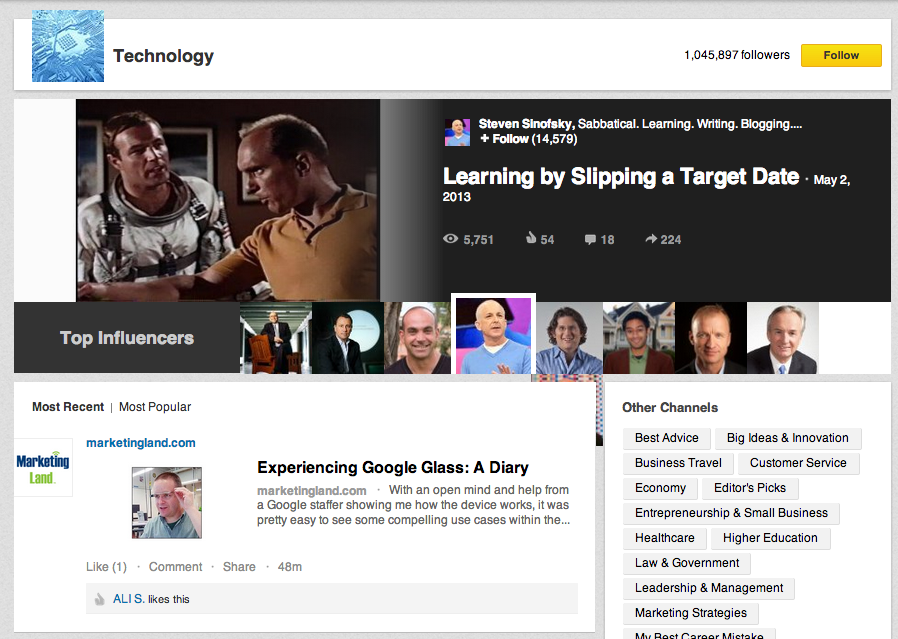 LinkedIn, now at 225 million users, continues to introduce more features to its site to keep people returning to it and staying there for longer. Today it’s the turn of LinkedIn Today, its social news page, which is getting a new feature called Channels. Channels is rolling out starting today to English-speaking users. LinkedIn says that it plans to announce the service formally on Wednesday. Update: here’s the formal announcement.

Channels bring together curated content around general subjects like technology, marketing strategies, retail and healthcare — 20 in all, with more getting added soon — with each one combining popular posts from news sources with those from selected people deemed influential (LinkedIn’s list of “influencers”) in the given topic.

Channels will be replacing “industries,” a feature that has been around since LinkedIn first launched LinkedIn Today in 2011. Industries were both more specific in terms of what they covered (eg, internet instead of technology), and also geared at news that was trending on LinkedIn, and specifically among your contacts.

Channels, on the other hand, attempts to be more interdisciplinary and less newsy. It makes use of the idea that there will be people interested in “social media” who are not social media professionals, and who are using LinkedIn as a learning resource rather than just a news source.

“We believe Channels better represents the content and topical conversations professionals are discussing and sharing on LinkedIn, which go beyond specific industries,” said spokesperson Julie Inouye. “Topics like Entrepreneurship and Your Career are applicable to more than just one industry.”

It also gives some more mileage to the hand-picked list of 250+ influencers that LinkedIn introduced in October 2012, with their posts also getting rolled into the channels mix.

It looks like over time, this could also include added multimedia such as presentations using SlideShare and more. And that could also potentially leave the door open for other kinds of additions, too. Although LinkedIn has not said yet where it will be using the technology/services that it picked up when it acquired the Pulse news aggregating app, you can see that the channels section on LinkedIn Today is one place that could become a natural home. (Another, which I’ve pointed out before, is in a revamped LinkedIn iPad and other native tablets app, which did not get upgraded at the same time as the iPhone and Android apps did the other week.)

Product manager Kevin Gu notes that among the other new features that will come along with the new channels will be the ability to see the updates from channels on your own homepage stream; the ability to sort content either by most recent news or most popular features; and a look at the top influencer posts on a given day. On top of this, users will also see channels making their way to their LinkedIn email digests, which will now include influencer posts, trending professional news as well as Slideshare content.

All of this, of course, comes back to how LinkedIn is shaping itself up for its longer-term growth strategy. Last week’s quarterly earnings showed LinkedIn still beating sales targets and earnings estimates, but the company’s stock still took a hit on evidence that revenue growth is slowing down.

In that sense, the move to enhance LinkedIn Today is more about improving the time its audience spends on the site. More time spent on the site could have a subsequent positive effect on advertising, a key revenue source for the company going forward — a model followed by companies like Facebook and Twitter, which have also made moves to introduce features that get users to linger on their pages for longer. Conversely, LinkedIn has confirmed that channels and influencers are not direct routes to revenue in themselves for now.

“Our influencers are not compensated to share their unique insights on LinkedIn and we do not have plans at this time to monetize our Channels pages or our Influencer platform,” Inouye said.

In the last several months, LinkedIn has introduced a number of changes. They’ve included upgraded, more media-enhanced profiles; a Contacts update to add in more “personal assistant” life organizing features; new iPhone and Android apps; an expanded search engine; @mentions in status updates; Klout-style endorsements; and a Recruiter homepage redesign for the site’s most dedicated user vertical. As with many of these other enhancements, LinkedIn Today, and its new channels feature, offer a more slick look and more functionality.