It’s fair to say that the “ambient location” craze has passed. Several of the mobile apps intent on connecting people with friends and other recommended users nearby are still struggling to find mainstream adoption. Some, like Glancee and Glassmap have sold. Others, like Kismet, have moved into new product categories. And today, the business-focused networking app Intro, is pivoting.

Gone are the “ambient location” features which once alerted you to nearby users based on things like geotagged tweets or check-ins. With the new version, the company has shifted the focus solely to making one-to-one introductions between members of LinkedIn or Meetup groups. 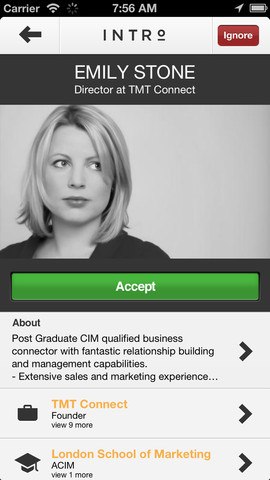 Explains co-founder Anthony Erwin, the decision to make this switch came from observations of user behavior. The best and most powerful introductions the app enabled were those where the members were each in the same group already. 90 percent of the time when an intro was created and members would connect, they cited being in the same group as the reason, he says.

“I think what’s happened in this space, is because it’s dealing with connecting strangers – people are kind of wary of that,” says Erwin. “If you’re going to create connections that work, they’re going to have to be very familiar; almost not like strangers, in a way.”

Users told him that when they were shown other group members, those people didn’t feel like random strangers.

Intro has always been more sensitive to the potentially creepy nature of ambient location apps, having previously introduced features that would allow users to switch of networking with those not outside of a set of preferred groups, for instance. The revamped version of the app is something of an extension of that earlier concept more than it is a hard pivot to an entirely new vertical.

In the updated application, available now on iOS and for Android in a few weeks time (currently the Android app is the older version of Intro), you’ll still be shown other group members who are nearby, but now the app take a wider view of your location. It begins by offering you connections across your city, as opposed to at your exact location. You can then quickly swipe through the suggestions to connect or reject the proposed connections.

However, when there is an event or other congregation of members in the same location, the app’s algorithm will immediately adjust to sort its recommendations by degrees of separation and other signals which would indicate closer ties with that user. These same signals come into play any time you’re sorting through connections, but they’re even more critical when there’s a crowd.

In addition to finding users who are in your same LinkedIn and Meetup groups, the updated service also now lets group administrators import their member list to Intro, then use an online web dashboard to view demographic data or to create and send out messages and alerts to users, such as meeting details. Recipients can then add these event reminders to their iOS calendar.

During testing and in the past few days when the app quietly relaunched, hundreds of group admins have claimed their groups on the app, and thousands of their members have begun networking. Groups where the admin has taken control include the NY Tech Meetup group, Founders Network, the Lean Six Sigma group, Soho House, the Silicon Roundabout group, the U.S. Realtors Association, the Pharmaceutical Association of America, a Red Cross group for frontline aid workers, and others.

Groups are free for members and admins of those with up to 100 members. Afterwards, pricing ranges from $10/month to $100/month, depending on the number of members. Around 30 percent of the group admins are now paying users, and the average price falls around $49/month.

The updated Intro app is available here in the iTunes App Store. The Android version will be updated soon.