That’s up from last quarter, when Facebook said it made 23 percent, or $305.9 million, from mobile ads. So this is a nice 22.5 percent quarter-over-quarter increase in mobile advertising revenue.

Because Facebook now sees about three quarters of a billion users per month on mobile devices, the company has to make a commensurate amount from these platforms. Analysts and investors are closely watching to see how well Facebook makes this leap from desktop-based ads to mobile ones.

Unlike Apple and Google, Facebook doesn’t own its own smartphone OS or sell its own hardware. It doesn’t have a way to earn a cut of app sales or in-app purchases like it does with games and apps on the Facebook platform.

Advertising is the key way that Facebook will monetize its mobile users. Up until the middle of last year, Facebook didn’t really have a program to earn revenues from mobile devices. But then it aggressively stepped up ads for apps in the mobile news feed. It’s well-positioned to do this as app discovery and user acquisition is still a hairy problem for mobile developers across the board. 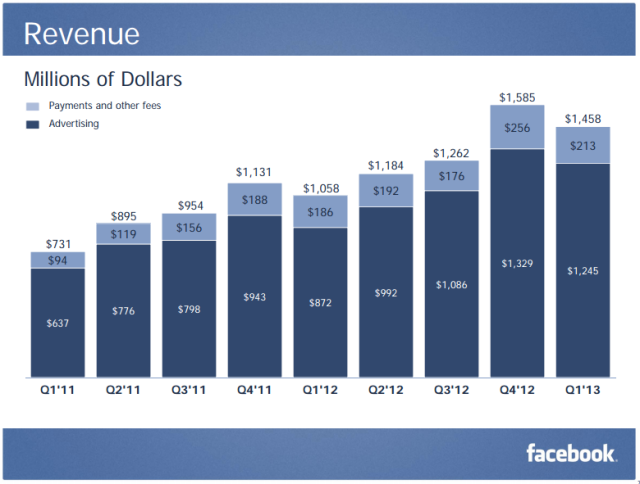