How do you get hundreds of millions of people to consider downloading your app? One of the only answers is Facebook’s app install ads. With the app stores overrun and every company going mobile, app install ads are Facebook’s big chance to monetize mobile. Companies like 1-800-Flowers and Poshmark say the ads are already a hit, and I think they could be the star of Facebook’s earnings tomorrow.

Putting Needles Atop The Haystack

If you’re unfamiliar, Facebook launched app install ads in October 2012 to let developers pay to promote their apps in the mobile news feed of Facebook’s apps. The ads show the app’s name, a short description, the category of app (i.e. adventure game, ecommerce app), a big image of the app, and an obvious “Install Now” button that opens the app’s page in the Apple App Store or Google Play so it can be quickly downloaded. On iOS, the App Store can even be opened in an overlaid window so users don’t feel like they’ve ditched their friends on Facebook.

Why are these so important? Because app discovery is a mess right now, yet mobile is becoming critical to nearly every business — web giants, mobile-first startups, game developers, name-brand retailers, and with time, even smaller businesses.

Beyond word of mouth, the only reliable way to get an app discovered for free is to climb onto the frequently browsed app store charts…which requires tens of thousands of downloads in the first place. That leads developers to try to buy installs however they can, but often they end up with users that never really use their app. It doesn’t matter how cheap they are to acquire if they don’t generate any return on investment.

A Big Bang That Gets Your Bucks Back

What app makers need are legitimate downloads. Downloads from users that will engage, share with their friends, and pay. Lots and lots of downloads. Few channels are big enough to deliver app discovery at a massive scale. There’s the existing favorite, Google AdWords, which are popular and making Google a ton of money. But increasingly, developers are turning to Facebook’s app install ads. In its last earnings call, Facebook said that since the launch of app install ads, 20% of the top 100 grossing iOS apps are using them.

Facebook’s clients agree. 1-800-Flowers.com’s VP of Mobile and Social Amit Shah tells me “Our ability to reach hundreds of millions of US users who are accessing Facebook every day on their mobile devices is phenomenal. Other than Google search ads, there’s not another discovery medium at scale if you want to drive a large number of downloads.”

Mobile-only fashion marketplace app Poshmark’s CEO Manish Chandra concurs, “We’ve been using mobile install ads since their beta and they’ve been incredibly cost effective. We’ve found no difference in the acquired users, whether from Facebook’s organic shares or mobile install ads, in terms of their engagement and overall behavior, so we’ve been using them as one of the largest sources of user acquisition for Poshmark.” Meanwhile, Canadian ecommerce discounts app Checkout 51 was able to pull in 10,000 installs over two days using app install ads. The cost per install came in at just $0.60. 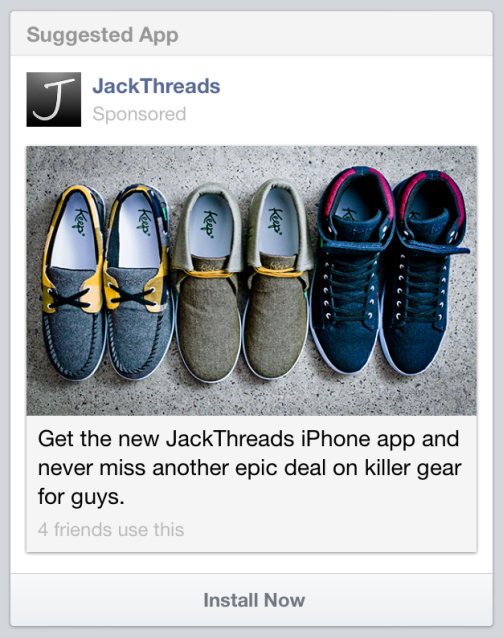 That low cost, and the quality of users Facebook’s app install ads deliver is crucial because buying installs only makes sense if you earn more on each user you acquire them it cost to rope them in. Facebook’s wealth of targeting data means it can show the ads to people who’ll actually want them and have the device the apps are designed for, so people actually become users with high lifetime value. That’s a big improvement over incentivized install ad networks that give people virtual goods or currency in their favorite games in exchange for downloading new apps. Downloaders often immediately delete these apps despite the developer getting charged for the ads.

1-800-Flowers President Chris McCann tells me “Facebook is putting us into the right context. [The ads] show friends who have Liked or used our app. We think it’s a great discovery/distribution mechanism.” The company is planning a big Facebook mobile app install ad buy this week before Mother’s Day to get people installing the 1-800-Flowers app that lets them easily buy gifts. Instead of using ads to drive people to a one-time purchase, McCann says “If we can get them to download an app, we’re a long term player to them”, and the company might get additional ROI beyond the initial purchase when future holidays roll around.

Tall Money On The Small Screen

Becoming the paid gateway to app install ads is a lucrative business. App stores already have users’ credit card information, and the gratification of a download is instant. That makes conversions easy, and attributing those installs to ads simple. That’s why Twitter recently launched its own app install cards, which makes it quick to download apps people talk about. By using Promoted Tweets to amplify tweets that include links to the app stores, advertisers can essentially run Twitter app install ads.

Competition from other channels recognizing the opportunity, and Facebook’s rates increasing as more developers run install ads are risks. [Update: As are the app stores creating their own native promoted apps advertising units, as Hunter Walk suggests Apple might.] Still, the business is already humming for Facebook, and it’s poised for serious growth (enough to support multiple players) as the app ecosystem keeps getting larger and more competitive.

That’s great news for Facebook, which needs more ways to monetize its 680 million daily mobile users. In Q4 2012, 23% of the social network’s advertising revenue came from mobile, but at that point mobile app install ads had only just launched.

When Facebook announces its Q1 2013 earnings tomorrow, I expect mobile will have grown to around 32% of ad revenue with app install ads playing a central role to that increase. All it takes is a quick scroll through the mobile news feed to notice how prominent they are compared to other ad units like promoted Page posts. While brand advertising was the rock of Facebook’s desktop ads business, app install ads could form the base of the mobile ad business its future depends on.