OpenStreetMap, the Wikipedia-like crowdsourced mapping service, announced a couple of changes today that will make it easier for anybody to contribute. Starting today, you can easily suggest corrections when you browse maps on OpenStreetMap. In the spirit of crowdsourcing, these proposed corrections will be farmed out to the service’s volunteers. Then the organizations, writes Harry Wood in today’s announcement, “a local mapper can visit the location to check the suggested information, and then update the map.”

This new feature is meant to allow more users to participate in the mapping process, even if they don’t have the time or skills to get involved in the details of creating a local map. Users who spot issues just have to click on the “add a note” button in the bottom-right corner of the window and suggest the change. 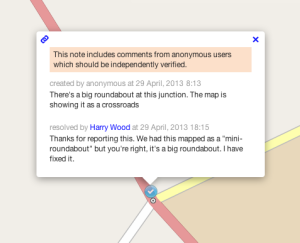 It’s worth noting that these suggestions don’t have to follow any specific format and users don’t need to have an OpenStreetMap account to suggest changes. Notes, Wood writes, “are free-form natural text, read by other people, making this a very simple way to communicate any problems we notice about the map without needing to get to grips with OpenStreetMap and its tagging system.”

Later this year, OpenStreetMap also plans to launch a new HTML5-based map editor, which will also make it significantly easier to create and edit maps.

“By making it even easier to add to the map, we’re increasing the amount of on-the-ground knowledge we can capture – further distancing OSM from the traditional map data companies and their lack of local expertise,” Simon Poole, the chairman of the OpenStreetMap Foundation said in a canned statement today.

Google Maps, of course, also allows users to report problems with its maps, and the company constantly updates its maps. It can often take quite a while before the team gets to look at all the reports that come in.