Video-editing app Magisto is picking up users, especially in the Android ecosystem, and it’s giving those users a new way to add a creative touch to the videos they produce. Launching today at TechCrunch Disrupt NY, the new Magisto Android app offers a way for users to doodle on their videos, create new borders, and generally add a bit of flair to their videos.

Magisto is best known for automatically creating interesting videos out of content that its users have already shot. Users simply pick some videos they’d like edited, upload them to the cloud, and Magisto does all the hard work of assembling them together in a new and interesting way. Users pick themes and music to set the mood they’d like, and Magisto’s automatic editing algorithm does the rest.

While that’s been a popular way for users to very quickly make their home movies actually watchable, Magisto is now giving them a way to better personalize videos. The new Draw Video feature will let them add their own doodles, set and color in borders, and generally add another layer of interactivity to their videos. 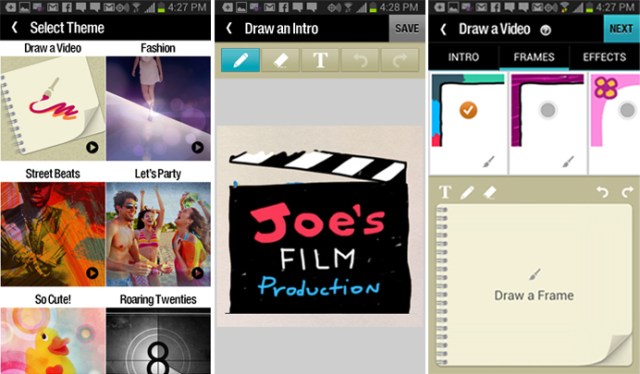 For Magisto, the addition of the Draw feature to its Android app comes as it focuses more on the Google-owned mobile operating system and the Google ecosystem in general. That includes integration with Google Drive, enabling its users to select and add videos that are stored in the cloud storage service. With Google Drive integration, Magisto also enables users to sync all newly created videos directly in that storage service.

The startup has doubled its number of downloads since the beginning of the year, growing from 3.5 million downloads in January to more than 7 million today. The startup has also seen greater adoption among Android users lately than iOS users. Part of that might stem from the relatively large number of mobile video-editing apps available for the iPhone versus those that are part of the Android ecosystem.

Due to all the different manufacturers, devices, and form factors of Android devices, there aren’t a ton of video-editing apps for Android users. Magisto can skirt most of the fragmentation problems that video app makers on Android face because all its processing happens in the cloud, rather than on the video device itself.

Mobile video editing and publishing continues to be a big opportunity, with other startups like Socialcam and Viddy and Twitter’s Vine all seeking to change the way people use video from their mobile phones. Magisto is hoping that by providing a little bit of editing and a little bit of pizzazz, it’ll be able to differentiate itself from the rest of the pack.