At the end of last year, Google announced that it would start testing a number of changes to Chrome’s New Tab page. The changes that were currently percolating through the development channels were anything but popular. Instead of the usual eight links to your most-visited sites, the Chrome beta channel currently features a large Google Search box and just your four most-visited links. Now, it looks like Google is giving up on these changes.

The other major change that was massively annoying (and made me switch back to the stable channel, too), was that Google added an “Apps” tab to the bookmarks bar and removed the usual shortcuts to web apps from the Chrome Web Store from the second page of the New Tab page.

The latest beta version of Chrome has now reverted back to the old New Tab page. As intrepid Google watcher (and now Google employee) Francois Beaufort noticed last week, the offline version of Chrome now renders two rows with four tiles each again, with the Google Search box still sitting above these, though). Chances are this design will now make its way through the release channels. It’s not clear what will happen to the “Apps” icon in the bookmarks bar, though.

You can still see what the experience would have looked like by switching the “Enable Instant extended API” to “enabled” in the latest Chrome beta. 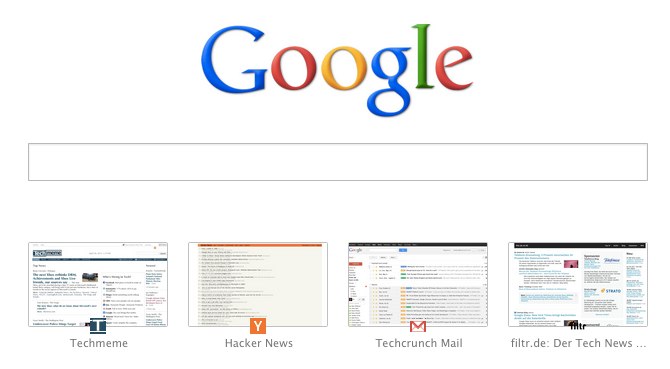