Last July, a group of veteran executives from eToys, eBay, Sesame Street, Discovery and Disney unveiled their ambitious plan to create a souped-up Khan Academy for kids. But rather than a straightforward port, the learning platform, called Wonderville, aimed to expand on Khan’s approach to the “flipped classroom” by aggregating educational content from a variety of third-party sources.

Using eBooks, TV shows, videos and mobile apps from iTunes, Amazon, YouTube and beyond, Wonderville creates what it calls “Smart Galleries,” which consist of digital content like quizzes, apps, fact sets and so on designed to reflect what kids are studying in class. The content, which includes some fun topics as well (like Bigfoot) to keep kids interested, is vetted by Wonderville’s team of teachers to ensure quality and age-appropriateness.

After nine months of development, Wonderville is officially launching its new-and-improved pilot program. The new Wonderville focuses on Kindergarten through fifth grade (as opposed to its previous focus on a wider range), allowing parents and teachers to improve their lessons through the inclusion of Common Core-aligned content. Wonderville has also expanded its scope in the hopes of becoming a platform that enables teachers and classrooms to connect, collaborate and share media — along with providing access to smart galleries of learning content.

The startup has leveraged input from over 1,000 teachers to create hundreds of smart galleries, which now include more than 10,000 videos, images, quizzes and rewards — and support Common Core State Standards for K-5. Teachers can build from 2,700 lesson plans contributed by their peers, much like fellow EdTech startups, BetterLesson, LearnZillion and TeachersPayTeachers, each of which aims to find better ways for educators to discover, share and customize Common Core-aligned lesson plans.

Each of these startups is scrambling to beef up its library of lesson plans and sharing tools. LearnZillion, for example, has 120K teachers registered and reaches over 1.5 million students, while TeachersPayTeachers doled out over $20 million to more than 5,000 teachers for sharing their lesson plans for cheap.

However, in comparison to its competitors, which focus more generally on K-12 teachers and content, Wonderville has narrowed its focus to the younger crowd and may benefit from “specializing” in this way. Wonderville founder Mark Eastwood tells us that teachers in more than 50 schools across the country are participating in its pilot program, and 25 companies and institutions are contributing to its crowdsourced content model.

The startup is also eager to extend its value proposition beyond its interactive library of educational content, though, by allowing teachers to create virtual classrooms on top of its content, which work in concert with whiteboards, mobile devices and PCs. Today, 30 percent of U.S. classrooms use interactive whiteboards, a number that is expected to grow to 65 percent over the next few years, Eastwood says.

Thanks to its recently being accepted into the Smart Ecosystem Network for content developers, the startup is now able to reach more than one million teachers per month by populating their interactive whiteboards with Wonderville content. 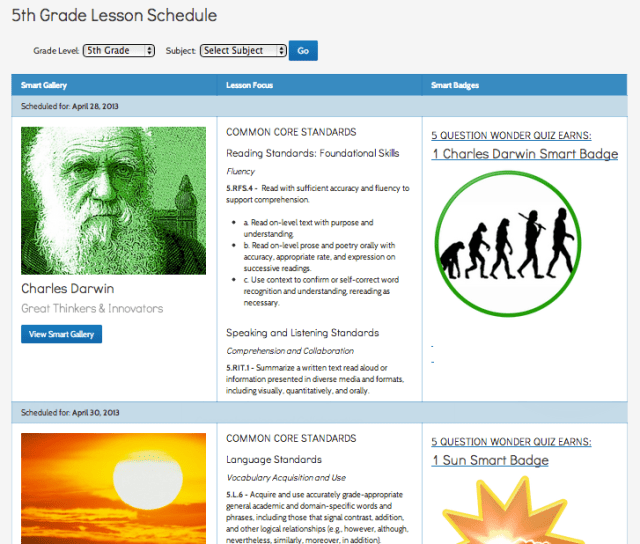 The other draw for teachers is that they can use these virtual classrooms to create personalized learning “rooms” for each student, or use them to upload class pictures, video and messages. In turn, teachers could, say, choose one of Wonderville’s interactive quizzes or games, assign it to students to take home or put them up on their whiteboard during class to test students’ mastery of a specific subject. Parents and teachers can then track student development through the platform, while engaging them in ongoing discussions about everything from Bigfoot and space exploration to popular culture and Abraham Lincoln.

The founder also tells us that Wonderville is standing firm in the decision to offer its learning platform (and future products as well) to teachers for free. The base product, he says, is also free for families, while parents can participate in Wonderville’s subscription plan to tap into additional features and help guide their kids along their learning path. And that’s where Wonderville will begin to monetize — if parents want to get help their kids get ahead, they’ll have to pay.

Today, Wonderville has 10 employees and has been privately financed, but, as it looks to beef up its distribution partnerships (particularly by focusing on the iTunes), the startup will be looking to raise its Series A this summer.