Ask any entrepreneur about what it’s like finding the right office space for their company, and they’ll probably respond with a grimace and some grumbling. Few light up at the thought of it. Founders have enough to worry about in trying to build an awesome product, please their customers, find quality talent and raise money without adding the struggle to find office space to the list. Part of the reason why it’s such a pain in the butt to find great office space is that, traditionally, the process has lived offline, confined to a world of brokers and their proprietary data, little to no transparency, and long-term leases.

PivotDesk, a TechStars Boulder alum, launched last week to bring a new solution for those office space blues. Rather than take the broker-disrupting approach of commercial real estate startup, 42Floors, or rehashing the now-defunct “workplace marketplace” model adopted by Loosecubes, PivotDesk wants to help businesses find a long-term fix by connecting them with companies that have office space to spare.

Backed by over $3 million in Series A funding from Foundry Group, the startup is launching its service in New York, San Francisco and Denver, with plans to arrive in new cities over the next year. PivotDesk wants to address the current reality of the commercial real estate market, in which long-term leases prevail. Of course, in the early-stages of building a company, when practically nothing is certain, long-term, expensive leases make little to no sense.

So, starting in NYC, SF and Denver, PivotDesk wants to connect young businesses and startups with later-stage companies that have already signed long-term leases, may not yet have grown into every corner of the space, and thus have room to spare. The model requires those looking for space to be flexible and to be willing to share space with another business.

Yet, at its core, the model is one that attempts to both bring a process that has largely taken place in private transactions behind closed doors, online, and to bring some transparency to the search for office space. Co-working is becoming increasingly popular in the tech industry, especially in Silicon Valley, where rental rates for office space are high.

Furthermore, for those with office space, there’s the benefit of being able to share some of that cost with another company and, on the flip side, young businesses are able to take advantage of a month-by-month (more flexible) lease, in turn, potentially adding value by exposing its employees to a more mature, business. In turn, both get to benefit from the added energy of having multiple businesses and smart people in a shared office space.

PivotDesk provides a management platform that allows host companies to more easily market, manage and monetize their extra office space, giving them the opportunity to reach a larger audience of potential cohabiters and a better way to manage those relationships over time. Of course, to provide more value than the next startup, PivotDesk puts significant emphasis on finding the right match. In a way, it’s approaching the problem like Match.com and others approach dating.

When creating a listing and profile (for both sides of the transaction), PivotDesk encourages companies to go into detail in describing the nature of their own business, its culture, as well as the office space and environment they’re looking to sell. Because co-working means that two potentially very different businesses will be working in close confines with each other day in and day out, finding the right match is essential. It is, truly, an intimate relationship — or it can be if both parties are on the same wavelength. 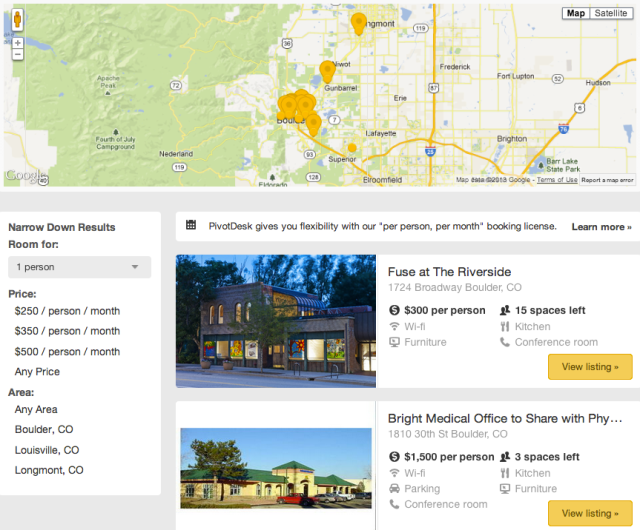 So, to better match co-working mates, PivotDesk takes into account the nuances of culture and company dynamics, essentially building a unique taste profile for businesses based on their industry, number of employees, work habits and environment and noise level preferences, for example. This attention to detail has resonated with startups thus far, and, since its beta launch last fall, PivotDesk has matched 100 companies with office space, including startups like Ben Huh’s Cheezburger Network, and now has over 200 listings in SF, NYC and Denver.

The other appealing feature is that companies can use PivotDesk with relative anonymity, at least in the search and discovery phase of the process, as listings don’t include the size (or square footage) of the space and most leave out the host company’s name. Instead, listings are based first on location, along with providing details on the culture and style (and the stuff mentioned above), the size of the company the space can fit and amenities.

A la dating apps like Tinder, PivotDesk requires interest from both parties to move forward with the transaction. Once both companies approve the match, PivotDesk offers some basic communication tools to make it easier to hash out the details, along with providing billing info and the necessary documentation — putting it all in one place to remove the headache.

Seeing that security is also an issue, and that like, dating, there are plenty of opportunities for the process to go wrong, become creepy or subject hosts to fraud, PivotDesk knows that it has to go out of its way to ensure that all transactions are safe — and legal. Once a match is approved, the company verifies insurance coverage for both parties and reviews sublease terms to make sure both parties are within the rights of a sublease, for example.

To monetize, PivotDesk takes a 10 percent commission each time the cohabiter renews its monthly lease. Of course, as is true of the sharing economy writ large — or as we’ve seen from Airbnb — the whole process can be incredible, until it’s not. One destroyed apartment, bad fit, fraudulent squatter can have lasting consequences, and jeopardize the user’s perception of the service.

By allowing companies to easily list their extra office space, manage the process and their leases and by producing matches based on cultural fit and paying attention to the details, PivotDesk has developed an appealing option for both sides of the transaction. However, while it likely won’t have to deal with brokers paying much attention to these kind of deals, the barriers to entry in this space aren’t exactly high. Any startup could potentially become a competitor fairly quickly. 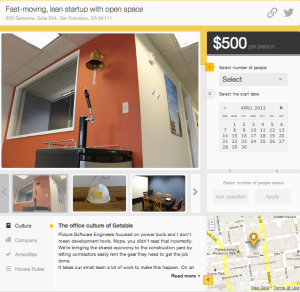 So, for PivotDesk, it’s all about providing the best user experience, maintaining security, providing quality selection and maintaining equality (and quality) of supply and demand. This is true of any P2P marketplace, and it’s not always easy. The space is relatively open at this point, and startups are hungry for better, online options, but as with marketplaces, there are likely to be only a few winners, or one.

In that sense, it puts pressure on startups to scale quickly, and maintain quality while doing so. Again, easier said than done. The other potential hangup is that, once startups connect and begin paying their lease, they may be more likely to work directly with each other, rather than incur PivotDesk’s 10 percent commission over the long-term. So, that could present a potential leak in the startup’s business model over time, although there will be plenty of opportunities to adjust accordingly.

On the bright side, however, while it’s currently laser-focused on serving startups, over the long haul, PivotDesk’s model (if it continues to succeed) could easily be applied to a wider set of use cases and verticals within the commercial real estate market.

Ultimately, at the risk of being repetitive, for startups, finding office space is a pain in the ass. Any business that removes the friction from the equation, provides favorable terms for both sides and makes the office hunt more transparent (and effective) is likely going to find it easy to curry favor. As such, PivotDesk is off to a good start with its matchmaking service.

Because it’s only live in three cities and is eager not to leave potential customers out, the company now allows entrepreneurs in any city to weigh in and help determine where PivotDesk will launch next. Essentially, the city that receives the most votes will become the next destination. Crowdsourcing!