The mobile health market is growing like a weed these days. According to mHealthWatch and eHealth Initiative, there are 31,000 health and medical-related apps on the market today. In fact, over the last year, the number of health apps jumped 120 percent, and hundreds of apps now hit stores every month. Yet, in spite of this exponential growth, the mobile health space is still in its “Wild West” phase. In other words, it’s a work in progress.

As mHealthWatch points out, there’s a lot of noise in the mobile health market, and a lot of misleading information. So, while the potential is high, there’s not enough data yet to prove that these products act as advertised and actually provide real value.

Simplee, the startup that has been called the Mint.com for healthcare expenses, wants to buck the trend of over-promising and under-delivering in today’s mobile health market. Simplee first launched its medical wallet back in 2011 to help people better manage their healthcare financials — to track visits, monitor benefits and pay bills online, for example.

Considering how expensive healthcare can be, and what a pain in the ass it is to manage, people are eager to find any way to streamline the process and reduce costs — to their sanity and their wallet. By making this appeal to consumers, Simplee has been able to find some traction: Today, it processes millions of dollars in payments each month across “thousands of medical providers” and has managed $2 billion in medical bills since launch.

Earlier this year, the startup expanded its service, bringing a B2B-style payment and loyalty platform to hospitals to allow them to distribute digital bills, among other things. The idea being to offer hospitals a medical wallet that can, on the one hand, help them increase revenues, while making it easier to deliver new features and a better billing experience for patients on the other.

Last week, the startup took the next step in the evolution, extending its medical wallet to the point of service through a new mobile app that allows people to manage and pay all their family’s medical bills from their phone, while on the go. In so doing, Simplee’s vision has been to transition from simply being the Mint.com of healthcare to a sort of Mint.com-meets-PayPal, for healthcare, expanding its medical wallet and uniting it with SimpleePAY. 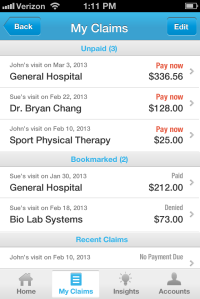 The new app allows users to view their medical history while in the doctor’s office or go back through billing history to see whether they’ve met their deductible, for example. They can also view a breakdown of insurance coverage and pay by credit, debit or FSA card.

Again, that’s all well and good, but when you consider the above fact — that many mobile health apps make big claims about convenience and the ability to improve users’ health in a significant way — it doesn’t mean much without supporting evidence. So, we asked Simplee to share a little bit more about how consumers are paying medical bills online and whether or not they’ve actually been able to increase payment performance among users, for instance.

While it’s still too early to say for mobile, as Simplee just launched its mobile app last week, the founders tell us that Simplee’s online medical wallet has been able to produce an increase in self-service payments of 17 percent, which has doubled in the last six months. Compared to 1 to 3 percent — what the company says is the industry norm. They also expect mobile to play a critical role in driving self-service even higher, especially at the point-of-service (i.e. at the doctor’s office).

In addition, the company says 90 percent of its users making multiple payments after making their first, and 40 percent of its payments come from users who have upgraded to the full medical wallet experience, which means they get an expanded billing view with deductible status, more stored payment methods and so on. 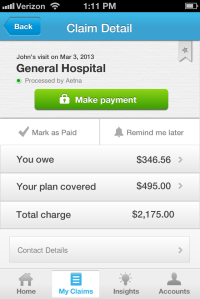 In other words, the founders believe this is a demonstration that users prefer horizontal payments and that the consumer side of its business is feeding the B2B-side of its payment platform. The first step was to build an online medical wallet, the next was to build a connected provider payment platform, and the third has been to connect the two and offer both experiences via mobile at the point-of-service.

In a sense, it’s not much different from what Pageonce is attempting to do on the more general consumer-side of the mobile bill payment space. Simplee is taking that and applying it to healthcare, while attempting to provide a value-add for hospitals and healthcare providers.

It’s too early to tell whether Simplee can significantly expand its business through its new mobile experience, but, given that it’s already established some validation online, the founders have high hopes for mobile. It’s a smart play, and could have a big effect on the way people pay their medical bills, reducing the headache and complex, paper-based billing process that continues to prevail in healthcare.