It's still early w unconfirmed scanner reports but if Redit was right with the Sunil Tripathi theory, it's changed the game 4ever

.@LukeRussert No it hasn't.

Reporters have a nasty addiction to a particularly potent drug: the attention that comes from getting a scoop. Last night, during the live manhunt of the Boston marathon bombing suspects, we saw a lot of respected writers completely tweaking out on it. For lack of evidence, speculation began to swirl from the least reliable of sources: Internet conspiracy theorists. In the morning, when it became completely obvious that amateur sleuths on Reddit had falsely identified a missing Brown University student as the marathon terrorist, many pointed fingers at Reddit as “vigilantes.”

Crowdsourcing detective work isn’t to blame; it’s the reporters and media outlets that gave unreliable sources a voice. The poor high school track student whose face was splashed on the front page of the New York Post is reportedly now holed up in his home, afraid to go outside. “It’s the worst feeling that I can possibly feel. . . . I’m only 17,” he told ABC.

The name of another “suspect,” a missing Brown University student, was haphazardly tossed around by the likes of NBC news reporter Luke Russert on Twitter. Even though Russert was explicitly skeptical, that doesn’t stop moderately informed citizens from misinterpreting the whole ordeal:

The unexpected infamy has caused the family of the missing student untold grief. “A tremendous and painful amount of attention has been cast on our Beloved Sunil Tripathi in the past twelve hours,” wrote a family member on a Facebook page dedicated to searching for the missing boy. 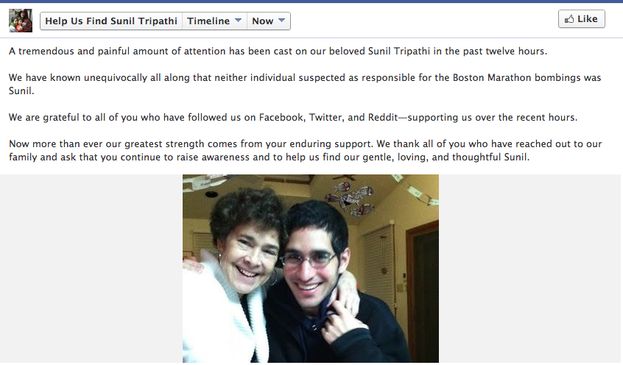 Indeed, one of the top posts on Reddit yesterday was “Media Outlets, please stop making the images of potential suspects go viral, then blaming this small subreddit for it. And read the rules we’ve imposed before calling us ‘vigilantes’.” Continuing:

“Until the media got involved, none of the images were going anywhere but to the FBI.
Every single article on this subreddit so far reads like the writer took a glance at the front page then wrote an article about it, we explicitly have a list of rules to stop “witch hunts” …

Edit: News outlets have spread images on TV & in papers of two male ‘suspects’ that they say the FBI is looking for, these have now gone viral. That media, is what a witch hunt is.”

The FBI and Boston authorities made a nationwide plea to send tips, pictures and smartphone video into their hot line. It turned out to be a lucrative call: a bystander had discovered a high-resolution shot of the suspect that was serendipitously taken after the explosion, giving the authorities a (literally) much clearer picture than grainy security camera footage. 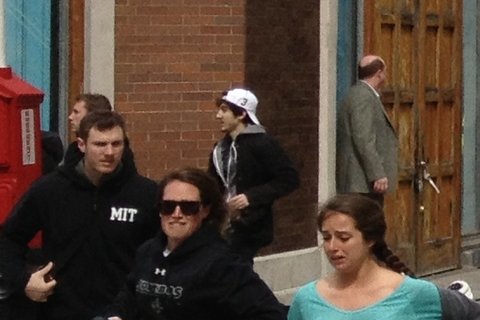 Online conservations can help bystanders become aware of latent content hidden in their phones. As the subreddit community hosting the conversation stated: “The harsh reality is that discussion requires looking at all possibilities. But to equate discussion with an unambiguous implication of guilt is presumptive and hyperbolic.” Adding, “We do not strive, nor pretend, to release journalist-quality content for the sake of informing the public.”

In other words, for the love of everything that is holy, these names are not for news stories, or even for social media updates, as viewers do not rightly distinguish between a story published on an official website or one tweeted out by a reporter’s account.

Overzealous redditors are conspiracy theorists — nothing more. One Reddit community had the good sense to apologize to Tripathi’s family. But, there will always be this kind of drivel on the web; it’s the cost of a free Internet.

However, we hold reporters to a higher standard, and they should start acting like they deserve it.