For those startups in newer areas like robotics, artificial intelligence and augmented reality who complain that VCs are too focused on consumer internet companies, help is at hand: Genesis Angels is a new VC that has raised a fund of around $100 million, with a large chunk coming from co-founder and serial investor and Kazakh petrochemical mogul Kenges Rakishev, which it plans to use for early stage investments in emerging areas like these and others. Based in Israel, but looking for startups worldwide, Genesis launched just this week, naming ex-Israeli prime minister Ehud Olmert as its chairman. 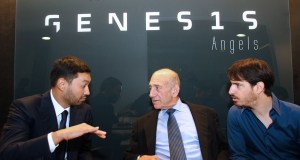 Moshe Hogeg, the other co-founder behind Genesis Angels (and founder and CEO of mobile video/photo startup Mobli, pictured here with Rakishev, left, and Olmert, center), says that the idea for Genesis came out of his and Rakishev’s observation that while the market for consumer internet services is saturated with a lot of me-too companies, there is a flourishing world of R&D in areas like robots and artificial intelligence that is not getting enough attention. It’s mostly giant tech companies like Google and Microsoft and academic institutions that are putting money into the very cutting edge of technology.

(Indeed, it was just yesterday, during Google’s earnings call, that CEO Larry Page talked about the “big bets” that Google wants to make on new technology. Google is not afraid to make big investments, he said, because the fear is that if it doesn’t it may miss out on the next big thing.)

The problem with this is that it leaves little room for startups. And although more recent developments like Kickstarter and Indigogo are creating a new groundswell of interest and financial support for some of these projets, there are yet others that will not want that kind of public profile for what they’re working on.

Hogeg describes Genesis’ role as something between the concept stage and when a VC may typically become interested in a company working on cutting-edge technology. “You can send the most brilliant scientist to a VC, but often it might take that scientist and his startup five years to create their products,” he explained in an interview. “VCs will say, ‘No problem, come back in four years.’ Genesis will invest in those companies in the meantime.” Typical investments will be in the range of $200,000 and $2 million.

If you visit Genesis Angels’ site, you will see that it already lists a number of companies in its portfolio, including Hogeg’s. These are listed, he says, because they are some of the investments Rakishev himself has made. Genesis, he notes, is still raising money for its first fund, with the total in play currently close to $100 million. Among those contributing to the fund are merchant bank Forbes & Manhattan, as well as private individuals who are well-known in the space of angel investments specifically around areas like hardware and new technology. The first three investments that are being made out of the new fund, Hogeg says, will be coming out shortly.

Ehud Olmert’s appointment as chairman is about laying the groundwork for the kind of assistance that Genesis Angels will be able to offer its portfolio companies, Hogeg says.

“He is a big believer in technology. Irasel invested the most in this area when he was still prime minister,” he notes. The relatively small country currently has some 3,000 tech companies, according to this report from the AP on the launch of the new VC.

Olmert took office in 2006 but left in 2009 under a corruption scandal cloud that he is still fighting. But that, apparently, has not affected his wider influence. “Mr Olmert is a very powerful man and he can use his contacts to help us and our companies, for example in partnering and joint ventures. He can open any door in the world.”

There have been other VC funds focused on these emerging areas. Dmitry Grishin, for example, the CEO of Mail.ru and founder of Grishin Robotics, last year started a $25 million fund dedicated to investing in other robotics companies (examples of his investments here, here and here).

It may be that Genesis teams up with people like this to cooperate on investments. “He shares a vision with us about this space,” says Hogeg.