The white device here (pictured next to a phone for scale) is in the process of getting mounted on store walls in Singapore malls. When active, the device will emit an ultrasonic signal that an app can pick up, and will allow participating stores to broadcast deals and rewards to shoppers.

The device is called the iSenze, and is made by a startup in Singapore called Rainmaker Labs. Rainmaker’s bigger plan is to roll out a service called ShopGuru to stores, which allows them to list deals on it. Users who have the ShopGuru app can browse for deals. How it all connects is that some deals require users to physically step into these stores, and the iSenze will ensure that their presence is logged.

Alex Leong, co-founder at Rainmaker Labs, showed me the device recently. The service isn’t live yet, but will be in a month or two. The company intends to get its clients properly onboard before launching, he said. Rainmaker is first targeting fashion brands and will go to F&B chains after that. It’s signed about 18-20 so far, and has been trialing the device in stores over the past six months.

The company has a “six-digit” budget to push out its marketing campaign, so they’re taking their time to get it done right, he said. 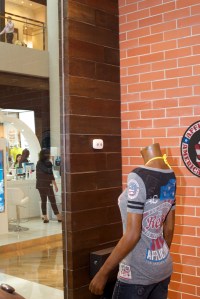 The way the app offers rewards is to award users points for browsing deals on it. You get more points for walking into the store, and should you buy anything, you can log your purchase with your user ID at check out for additional points. These points are redeemable for other goods from participating stores.

On the retailer’s end, the ShopGuru service will provide a dashboard with some customer analytics in it, said Leong. This is derived from customer behavior in the app, as well as their physical movements, as tracked by the iSenze. This can provide more accurate feedback on what customers are interested in, and what deals don’t get picked up.

It’s free for shops to sign up with the ShopGuru service, but Rainmaker takes a cut of the sales made through it.

Rainmaker was founded in March 2011, and closed its first seed round of S$590,000 last November, led by Singaporean tech investor, Incuvest. Together with some angel funding at the start, Rainmaker has hit $800,000 so far, said Leong.

Ronnie Wee, managing partner at Incuvest, said the team was picked for incubation because of the potential in solving a “real problem in the market today”. “Since our investment, they have started to show good progress and solid traction with customers,” he said.

Rainmaker’s managed to pull along a few seasoned advisors in the country as well. Liew Woon Yin was the former CEO of the Intellectual Property Office of Singapore (IPOS), and is a pro bono consultant for the startup. Tay Liam Wee, group managing director of Sincere Watches is also an advisor.

Singapore’s first for the ShopGuru service, but it intends to move into the Southeast Asian region soon after.