Globally-known London-based product and design consultancy Berg has become best known for its work with major tech companies such as Apple and Twitter, as well as it’s now famous “Little Printer” design which captured the collective imagination of the tech world last year. The tiny device that could print out any kind of information you wanted from the web became a physical manifestation of how web services might interface with the ‘real world’. But it turns out that the Little Printer set BERG’s founders’ minds racing towards a new strategy – the ultimate pivot from the agency/client model to becoming a product-based startup with a cloud platform. BERG London is poised to become Berg Cloud, described as a ‘nervous system for connected products’ built to run at scale’. As an example of this platform running, BERG has produced a “Twitter Clock”, being presented in London today to advertising agencies that work with Twitter, which can be programmed to make three birds appear indicating Retweets of an account or other similar alerts.

BERG Cloud aims to be an “operating system for connected products”. What we saw, cofounder and CEO Matt Webb told me in an exclusive interview, is the emergence of a platform that could control everything from the Little Printer to the signage in a city, to home electronics and automation inside businesses. Up for grabs will also be services like fleet management.

“Web connected products are smarter, more social and more alive. As hardware and the cloud meet, new product categories are born and new business models are enabled. The network is the new electricity,” said Webb.

But he correctly pointed out that building and sharing these connected products is going to be complex and expensive without a platform. 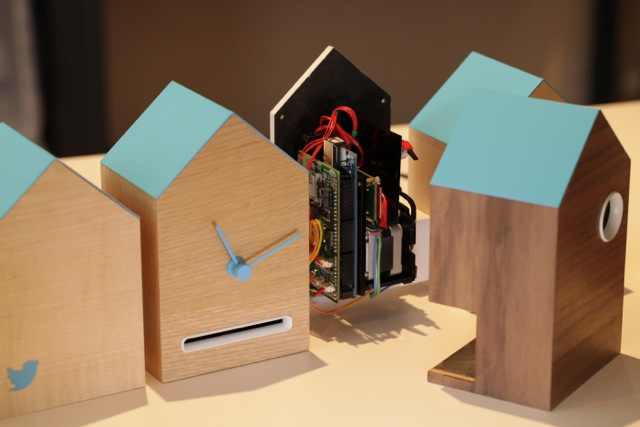 Other companies playing in this space include some pretty big names already: Twine, Belkin (which has acquired Linksys), Google with its ‘Android At Home’ product, Amazon with its connected chip in the Kindle, and Apple with its push for Bluetooth 4. In other words, others have identified that this is indeed going to be a very big market. We’re talking about building the platform for the Internet of Things.

But there is also space for a platform which is so open that creators of new products will just naturally use it to prototype new products. BERG Cloud hopes to provide that potential.

Webb wants BERG Cloud to make life “easier for developers, and more intuitive for users” not just by bundling technology but by building their own products as well on the platform

BERG Cloud will be aimed at products which need to communicate with the Web at any time as opposed to personal smartphone peripherals such as those used by Bluetooth 4.

It will employ end to end encrypted connectivity using Zigbee wireless which is low power and low bandwidth. You can’t stream video over Zigbee, but you can make battery powered connected products.

BERG Cloud is also planning to provide the wireless chip for products (which run the BERG Cloud firmware), and the BERG Cloud Bridge which connects to the office router or home broadband router by ethernet, and establishes the Zigbee wireless network.

For developers, their hardware will have a Web API at bergcloud.com, so they can bring their product to life by developing a backend website and a mobile user interface, detailed here.

There will also be resources for companies that want to product BERG Cloud-powered ‘shields’ for Arduino, Raspberry Pi and mbed run devices.

All in all it is a major pivot into a brand new business model for BERG, joining the startups that BERG and Webb himself have been such vocal and supportive proponents of in the “Silicon Roundabout” area of East London, also know as Tech City.