Dow Jones Venture Source released its quarterly report on the state of venture capital, including data on number of VC deals, funds raised, M&As and IPOs in the technology sector. According to the report, U.S.-based companies raised $6 billion from 752 venture capital deals in Q1 2013, an 11% decrease in capital and a 6% decrease in number of deals from the previous quarter. Compared to the same period in 2012, there was an 11% decrease in deals and a 12% decrease in amount invested. Additionally, median pre-money valuation dropped 79% from 4Q 2012. 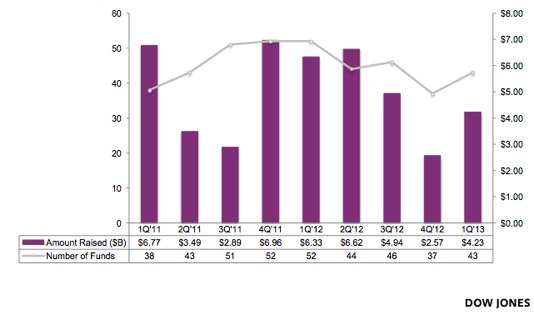 Deals in Information Technology (IT), Healthcare, Energy and Utilities, and Industrial Goods all declined, and deals in Business and Financial Services, Consumer Goods, and Consumer Services investment increased from the previous quarter. 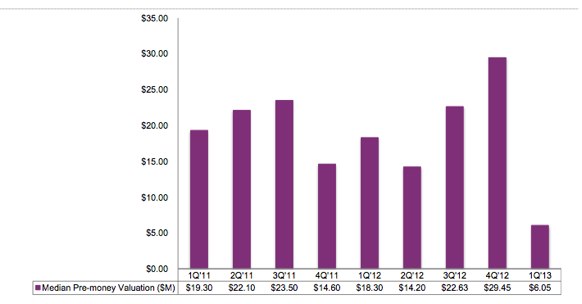 The largest funding deals in the Internet and IT sector included Pinterest’s $200 million raise and Living Social’s $110 million raise. By VC firm, NEA was the most active investor with 22 deals, followed by 500 Startups, Andreessen Horowitz, Y Combinator and Greylock Partners, respectively.

In terms of VC funds, 43 funds raised $4.2 billion in Q1 2013, a 16% increase in number of funds and 65% increase in amount raised from prior quarter. The big raise for the quarter by a VC fund was Battery Ventures X LP, the largest U.S. venture capital fund of the year, raised $650 million, accounting for 15% of the total amount raised in the quarter. Spark Capital announced a new $425 million fund and Redpoint raised $400 million in the quarter. The median U.S. fund size for the quarter was $143 million. 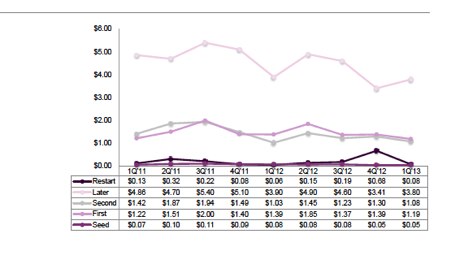 Despite a 16% drop in raised capital, healthcare saw the largest investment allocation by sector with 162 deals raising $1.9 billion and accounting for 30% of the total venture capital investment. IT reported a 30% decrease in amount invested with $1.9 billion in 256 closed deals, 10% drop in number of deals compared to the previous quarter. 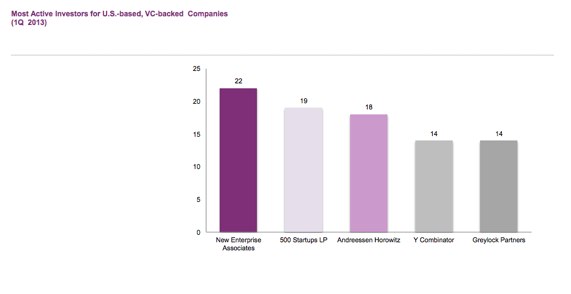 In terms of IPOs, Nine venture-backed companies raised $643 million through public offerings in 1Q 2013, a 55% year-over-year drop from $1.4 billion raised by 20 IPOs in 1Q’12 and a 47% decrease compared to the previous quarter. The largest IPO of the quarter was Marin Software, which completed a $105 million IPO.