With the ink still drying on last week’s acquisition of news aggregation app Pulse, LinkedIn continues to double down on mobile, the fastest-growing consumer service among its 200 million members. Today it’s announcing a major update to its iPhone and Android apps — the first big upgrade in nearly two years. And, to take advantage of the traffic it’s seeing on mobile, it is also introducing ads, in the form of sponsored content in the LinkedIn stream.

With the sponsored content introduced as a “small test” on LinkedIn’s desktop and iPad versions in January, “We’re now expanding this test into the mobile phone experience,” says Joff Redfern, head of mobile products for LinkedIn.

Redfern says that the two new, free apps being launched today were created out of the feeling that the originals “were just not as shiny as they were one year and eight months ago,” when they were first launched. After LinkedIn created the new apps, it used its own staff as guinea pigs. “We’ve had the whole company using it,” Redfern says. “And they have given us 10,000 individual pieces of feedback.” The products of that trial are the two apps being launched today.

The new look is focused primarily around an upgraded, and more interactive, activity stream. As with the desktop app, the stream continues to bring in content posted by people in your network; but it also includes posts from “influencers” as well as news from within your network (the montage of job changes at the top of the main illustration here on the left is one example). It also has bigger, less statically-placed pictures and a generally slicker look. Like the desktop app, LinkedIn uses algorithms to help personalize this experience to each user. The new apps also give users the ability to comment on items in their stream, as well as endorse items, by way of a new thumbs-up icon that glows and grows when you tap on it (you can see it in the video below).

Here’s a look at how the old and new apps compare: 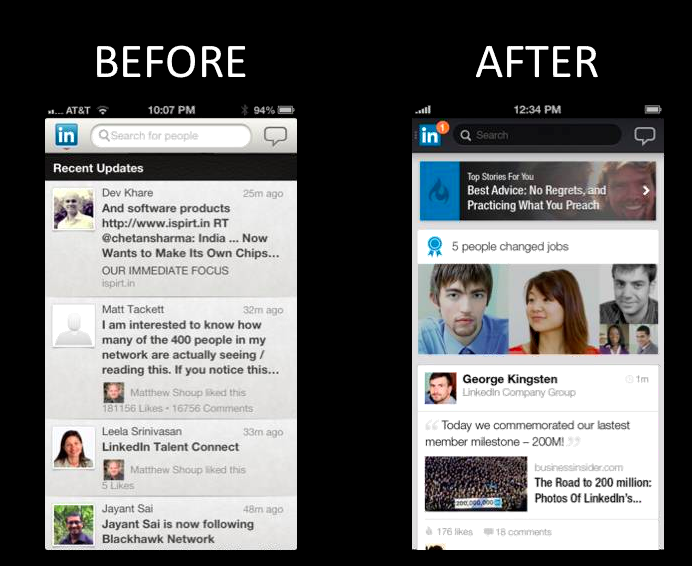 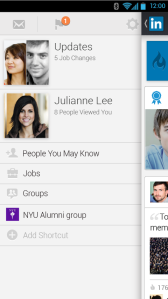 The new apps also let users more easily toggle between this new stream and several other features. A swipe from the left side of the screen to the right brings up a menu of options that include accessing your private messages, connection invitations, calendars, jobs from your job searches, groups you belong to, and more. And the “in” icon at the top of the screen, near the search, also serves as a way to notify you when you have a message pending.

As for the sponsored story test: there have been a lot of signs pointing to LinkedIn introducing more of this in its mobile apps. Not only are the apps free to use, but LinkedIn has been increasing how and where it uses paid promotions on its desktop version. Competitors like Facebook are also seeing a lot of interest, and good user response, to its mobile ads. And, of course, there are the mobile traffic numbers: LinkedIn says that 27% of its 155 million monthly users visit LinkedIn via mobile apps (up from just 8% two years ago); and weekly mobile page views have jumped 250% year-over-year. So while users typically only stay in the mobile app for 2 or three minutes at a time, there are a lot of them doing that, day in and day out.

The trade-off for possibly seeing more ads are more features in the apps. Kiran Prasad, head of mobile engineering for LinkedIn, says that both versions will be upgrading and expanding their features a lot more frequently going forward. The company continues to tinker and work with what he calls the “personalization aspect.”

“It’s hard to get everything that LinkedIn does on to a single application on a small screen,” he says. All the same, he says that this is the “first time that we are leveraging in the app the data that we have about our users. This is not just to make the stream more relevant but also the application as a whole.” He says LinkedIn has built the app using Hadoop and Hive “to find the best areas recommentded for you to navigate.”

To get a sense of where its mobile apps are going in terms of new features, it’s worth looking at what LinkedIn has been doing on the desktop.

Since last summer, LinkedIn has been making a number of upgrades to its desktop version — releasing a whole new homepage redesign; adding more interactive, social features like Klout-style endorsements, easier content sharing and the ability to tag users in status updates; and building a completely new search engine. The mobile apps that are launching today are laying the groundwork for more of those changes to make their way to the smaller screen. These are only coming over time, however. The search feature, for example, is still focused only on giving people results, leaving out jobs and companies.

“Right now search on the apps is very much focussed on people search,” said Redfern, pointing out that at the moment LinkedIn sees 26 people searches, and 90 profile views, per second on mobile devices.

Part of the reason for sticking to people results is because of how LinkedIn sees its mobile app getting used. “We think of people doing pre-meeting intelligence on a person, seeing their education, connections and work experience so that it’s easier to start a conversation,” he says, adding that additional search capabilities for companies and jobs — as exists on the desktop search — will be “in one of the later versions of the mobile apps.”

But one area where LinkedIn will not be investing too much more, it seems, is in HTML5, for now at least. Prasad and Redfern both said the HTML5 app took up too much memory to run and ended up crashing.

“We were seeing that people are engaging a lot more on mobile, and so we wanted to make the experience more efficient,” says Prasad. “That meant moving away from an HTML5-based app and to more of a native app experience.” Redfern points out that even small things, like that new “like” icon, would not have been possible. “Plus, we need to go where our users are,” he says, and that is on native apps for Android and iPhone handsets.

LinkedIn is following its users in another sense, too. The company says some 64% of its overall member base now comes from outside the U.S., and so to make sure users in its biggest international markets are not being left out of the mobile game, the company is also adding support for several different languages, taking the total to 15, including Bahasa Indonesia, Bahasa Malaysia, English, German, Spanish, French, Korean, Italian, Japanese, Portuguese, Swedish, Chinese (Traditional, Simplified), Dutch, Norwegian and Turkish.

With today’s news focused on iPhone and Android, the next step will be to see how and if Pulse makes its way into an update of the LinkedIn iPad app, and when the company may next revisit Windows Phone and BlackBerry.