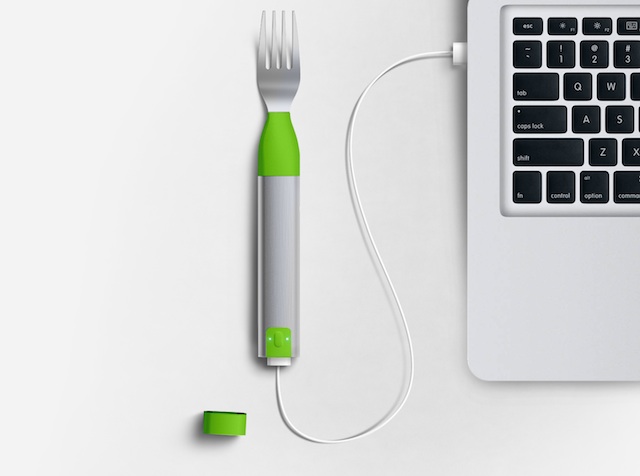 Modern day eating habits are making us fat, stupid, and sick. Even for those high-octane health-nuts with the discipline to have a salad, rapid eating between meetings can cause weight gain, brain fog, illness, and fatigue. Now, a high-tech fork has bottled the “don’t eat so fast” wisdom of our mothers in an everyday object that buzzes whenever it detects users eating too quickly. While much has been written about the HAPIfork, no writers had taken it for a test run. After only a few minutes reviewing the HAPIfork, it retrained my overly anxious subconscious eating habits to take more time in between bites.

Two Problems With Eating Too Quickly

The body was not meant to shovel down huge mountains of food. Normally, nutrition slowly disperses into the bloodstream; when the body is overloaded with food, it has to reroute the resources of the mind and body to dealing with an incoming meal.

1. Overeating – Our brains don’t trigger a sense of fullness until well into a meal. In one study, those who finished a meal in 9 minutes, rather than 29 minutes, ate 67 more calories–that translates into about 1400 extra calories/week, or about half a pound of weight gain.

2. Blood Sugar, Diabetes, And The Mind – Eating quickly is the surest way to drown your productivity in brain fog. Slow eating levels out the amount of sugar in the blood stream. An hour and half after my HAPIfork meal, my blood sugar was a cool 97 mg/dl (as measured by an over-the-counter blood glucose monitor). In the past, I’ve noticed that a blood sugar of 110 mg/dl is enough to either put me to sleep or put me into a daze (fast eating can spike my blood sugar into the +110 range). Another bonus of eating too quickly: all that extra blood sugar may increase the likelihood of getting diabetes.

The device itself is a rumble pack encased in a thick-handled fork. HAPIfork delivers a moderately delightful buzz whenever it comes in contact with the skin, should  individuals take bites faster than user-defined time intervals. I tested out a reasonable setting of 10 seconds in between bites, which was difficult for my naturally fast-eating ways. It only took a few rumbles of my mouth to slow me down. By the end of the meal, I began to unconsciously place my fork into a flat position, rather than holding it like a spear waiting for attack.

The beta prototype still has some kinks to work out: eating a salad confused it, since folded over lettuce would sometimes block the metal from touching my skin. Munching on a big piece of food, too, lights up false positives, because multiple contacts with the lips is, technically, frequent bites. The HAPIfork teams assures me the final product will  have a more polished experience, which includes a website/smartphone app for tracking eating habits and setting goals.

Overall, I’m a fan of the HAPIfork. Eating can be as destructive as it is enriching. For some reason, it’s become socially acceptable to eat like a kid rushing to make time at lunch for recess. We need to slow down.

The media has had a field day poking fun at the somewhat paternalistic eating utensil. Stephen Colbert even did a skit about it, after its launch at the Consumer Electronics Show.

But, according to HAPIlabs CEO, Fabrice Boutain, users are in complete control of how far apart they set the bite intervals, or even if they want the fork to simply monitor their eating habits without buzzing, “that’s why we created HAPIlabs, to help people take control over their lives”.

Those who suffer from Diabetes or heartburn are often told to eat slower, so there’s a sizable population of people who have a medical need to tame  their otherwise uncontrollable scarfing.  The rest of the HAPI costumer base will be aiming to slim down their love handles.

Finally, the medical research community, according to the HAPIlabs team, is itching to get their hands on their users’ sweet, sweet data. Combined with other quantified-self products, like scales and calorie-tracking armbands, researchers could perform valuable studies on health behaviors and learn important predictors of illness–for a fraction of the normal cost.

The HAPIfork is launching to the public with a Kickstarter campaign to raise money and build a community of users.