WorkinBox matches incoming email with CRM data to help sales people prioritize and focus on messages from customers and prospects, access relevant information and files from CRM, and update CRM systems. The technology has two parts: 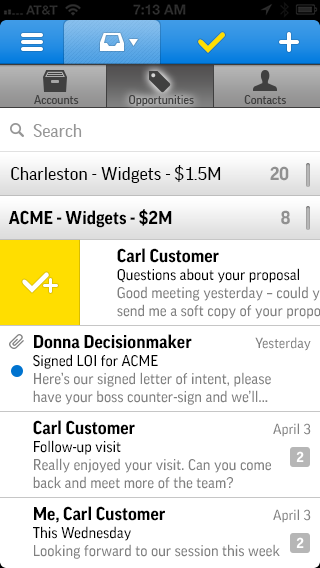 Salespeople can sort their inbox by opportunity size, and access the information and files they need to resolve customer questions. They can turn messages into actionable tasks, and update salesforce.com as they work. It is designed to help bring value to sales organizations that spend $12 billion a year on CRM systems that don’t get used, especially on the go.

Mobile systems are changing CRM. CiteWorld recently had a story about Bluewolf CEO Eric Berridge who spent a day on the road with Sysco sales people to see how they work. He learned they do not use their CRM apps.

The customers he visited were just as busy. “They all have five minutes, maximum, to deal with him; they’re running a business, they have to deal with cash registers and waiters and deliveries. The notion of this guy using a CRM system in front of the client in the five minutes they have for him is a complete disconnect from how his job works.” The salesman Berridge shadowed told him he was part of the pilot system. “He didn’t turn it on once.”

Sales professionals rely heavily on email to engage with prospects, yet there’s critical information about these prospects in a separate CRM system. Switching context between the two is cumbersome, especially on a mobile device.  If a single app could bring those two worlds together, providing instant access to the information and actions needed to win a deal, companies will be lining up to use it.

Co-Founder Ryan Nichols said Tylr competes with two types of startups. Mobile sales tools like Crushpath and Doubledutch that he says would be concerning if they tackled the elephant in the room for mobile productivity: the email inbox.  He said there are a group of startups tackling mobile email, like Mailbox and TaskBox. “They’d be concerning if they started connecting their inbox to enterprise apps and targeting specific enterprise roles,” he said.

Tylr has raised more than half of the $1.5M in seed financing it is seeking to build out its mobile work platform and make the app generally available at Dreamforce in November. It has four local employees and one offshore. The company will double its employees by the end of the year.

The company is backed by the Citrix Startup Accelerator, the Alchemist Accelerator, and a group of individual investor/advisors from companies like SAP and salesforce.com.

More effective filters are needed for email. It’s just a question of how much Tylr can be applied to work passively without too much manual intervention.